In the depths of the COVID-19 pandemic, B2B e-marketplace IndiaMART InterMESH was able to take its margin all the way past 50 percent. As it returns to business as usual, it is still eyeing margins to the tune of 28-30 percent. Here's how it is doing it.

TRADE
IndiaMART InterMESH clocked revenue growth of 23.7 percent in the April-June period — the first instance of growth above 20 percent in more than two years. That was boosted by a robust increase in the number of paying subscription suppliers — or vendors having a paid subscription. The New Delhi-based B2B e-marketplace is betting big on strong subscriber additions in the coming months to keep its margin well above pre-COVID levels going forward. That after investing frugally and shelving investments to protect its margin during the depths of the pandemic.
So what's the company's mantra to pre-COVID growth levels?
IndiaMART Founder and CEO Dinesh Agarwal told CNBC-TV18 that the e-commerce company expects its margin to be in the range of 28-30 percent in the near term as against levels of 25 percent before the pandemic.
The company did not invest in growth during COVID and there are no acquisitions on the cards — something that helped it take the margin all the way to 48.8 percent last year, according to Agarwal. 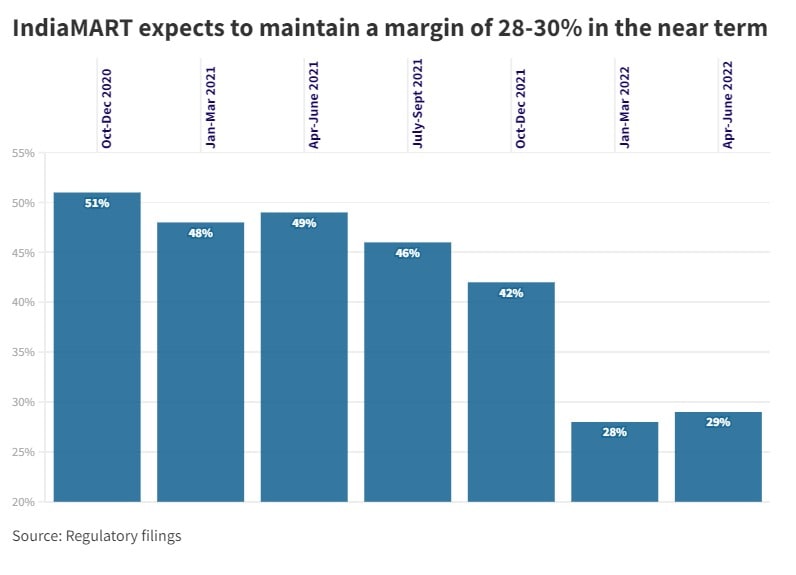 The B2B e-tailer has returned to growth investments in manpower, product and technology, sales, and servicing — boosting its revenue as well as paying subscription suppliers. It is not worried about a little decline in its unique business inquiries. Agarwal said IndiaMART kept ad spends at nil for the last 5-6 years.
"During COVID, since we did not invest on growth at all, margins actually shot up to 49 percent. The offices were also closed. And then two things happened. One, we went back to the normalcy, as well as we started investing in growth in terms of employee addition... In the near term, the margins are going to be in the range of about 28-29-30 percent and over the period of time, they will start to expand further as we grow the operations further," he said.
IndiaMART expects addition in paying subscribers to be at 8,000-9,000 per quarter going forward. If that happens, it would mean growth of 44.6 percent in its paying vendor base in the year ending March 2023 compared with the year ended March 2019.
"I believe that 8,000-9,000 (additions per quarter) should be the new normal. Since we started to invest in growth immediately, the churn has not yet caught up. As the churn will caught up, I believe 8-9 percent is the right guidance," he said.
The company's margin — a key metric of profitability indicating the amount by which a business's sales exceed its costs — came in at 28.6 percent, from 48.8 percent in the year-ago period, on higher employee costs and spending towards growth, according to a regulatory filing.
IndiaMART's revenue increased 23.7 percent on a year-on-year basis to Rs 224.6 crore for the quarter ended June.  Its profit fell 46.8 percent on year to Rs 46.7 crore for the three-month period thanks to the drop in its margin.
During the April-June period, its expenses included a one-time cost of Rs 4.1 crore related to the acquisition of Busy Infotech and Finlite Technologies. "I don't think there is anything on the cards as of now. If something will come up over the next year or so, we'll let you know," Agarwal added.
Catch latest market updates with CNBCTV18.com's blog
Check out our in-depth Market Coverage, Business News & get real-time Stock Market Updates on CNBC-TV18. Also, Watch our channels CNBC-TV18, CNBC Awaaz and CNBC Bajar Live on-the-go!
Tags