ICICI Lombard in focus as Jefferies sees an upside of 29%

ICICI Lombard in focus as Jefferies sees an upside of 29%

Jefferies has set its target price on the stock at Rs 1,620. At 9:31 am shares of ICICI Lombard were trading in the green at Rs 1,270, seeing a 0.5 percent upside from the previous close on the BSE.

Shares of ICICI Lombard are in focus as global brokerage firm Jefferies has maintained a buy rating and sees about a 29 percent upside in the stock from the current market price.
Jefferies has set its target price on the stock at Rs 1,620. At 9:31 am, shares of ICICI Lombard were trading in the green at Rs 1,270, seeing a 0.5 percent upside from the previous close on the BSE.
The foreign brokerage firm has a ‘buy’ rating on the stock. It believes that the risk-reward is looking more favourable to ICICI Lombard as it has outperformed private peers on premium growth.
The brokerage firm said one of the areas of pressure on ICICI Lombard in the financial year 2022 was slower growth in premiums and market share loss.
"In FY22, it grew by 5 percent vs 11 percent for private peers, and growth was slower than private peers in 11 of 12 months. Over the four months of FY23, it has grown by 28 percent year-on-year (low base helped) in line with private peers, and in the past two months, it has grown faster,” Jefferies said. 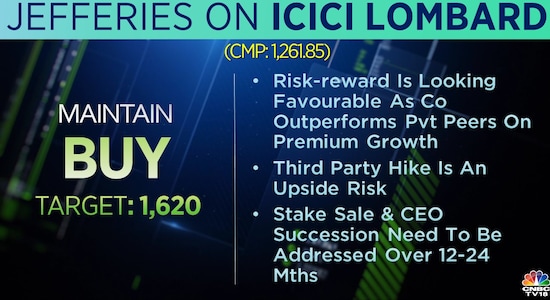 The brokerage firm added that the growth was aided by adding new products, distribution expansion, and digital partnerships.
Jefferies also noted that two key issues that need to be monitored for ICICI Lombard. First, the need for ICICI Bank to dilute its stake from 48 percent now to 30 percent by September 23. Second, the succession at the CEO level needs to be addressed over 12-14 months as per the indicative norms of the firm. Bhargav Dasgupta, who has been the MD and CEO of ICICI Lombard General Insurance Company since May 2009, may need to retire in May 2024 when he completes 15 years.
Also read: DreamFolks Services shares to debut on bourses today — here's what grey market signals
The brokerage firm also noted that it expects ICICI Lombard to improve its Combined Operating Ratio (CoR), a measure of general insurance underwriting profitability, from 109 percent in FY22 to 101 percent in FY25.
CoR is important because if the ratio is more than 100 percent then it means that the company is paying out more money in claims that it is receiving from premiums and making fewer profits.
Jefferies believes this should increase ICICI Lombard's earnings at a CAGR of 24 percent from FY23-25.
For the April-June quarter, the company reported a jump of about 80 percent in its net profit at Rs 349 crore as compared to Rs 194 crore in the corresponding period a year ago.
Catch latest market updates with CNBCTV18.com's blog
(Edited by : Nishtha Pandey)
Check out our in-depth Market Coverage, Business News & get real-time Stock Market Updates on CNBC-TV18. Also, Watch our channels CNBC-TV18, CNBC Awaaz and CNBC Bajar Live on-the-go!
Tags