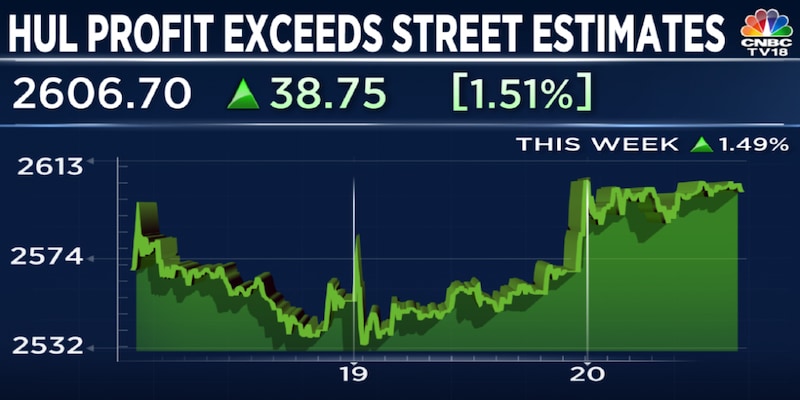 Hindustan Unilever Ltd (HUL) shares extended gains to a second straight day on Wednesday, a day after the FMCG giant's quarterly performance largely met Street expectations. HUL's profitability was backed by better-than-expected growth in domestic volumes.
However, analysts are skeptical over HUL's shrinking margin — a key metric of profitability indicating the difference between revenue and costs.
Although input cost pressure eased somewhat and the rural segment showed signs of a recovery, the company's margin as well as management commentary missed failed to meet expectations. Its revenue came in at Rs 14,272 crore for the three-month period, as against Rs 11,915 crore for the corresponding period a year ago — an increase of 19.8 percent. Among key segments, revenue from home care saw growth of 30 percent, and that from beauty and personal care rose 17.3 percent. Analysts in a CNBC-TV18 poll had estimated revenue growth from home care at 16-18 percent, and that from beauty and personal care at 9-11 percent.
Revenue from the food and refreshments unit, however, increased 9.3 percent, missing analysts' estimate of 10-12 percent.
Domestic volumes surprised the Street, with growth of six percent, as against analysts' estimate of 2-3 percent.
HUL's EBITDA margin — or a company's operating gains as a percentage of its overall sales — came down by 120 basis points (1.2 percentage point) to 22.75 percent compared with the year-ago period.
Analysts had estimated the EBITDA margin at 23.2 percent.
The FMCG major's margin for the quarter ended June 2022 was the lowest since the three months to December 2018.
HUL said its margin in the July-September period may be under pressure. It also said rural demand was still weaker compared to urban, and the company awaited triggers for a recovery.
Deven Choksey of KRChoksey told CNBC-TV18 that the company's quarterly performance was convincing given the tough environment.
"In the festive season, once again, we should start to see a higher amount of growth coming in from likes of HUL. We continue to hold and have a good 'buy' recommendation in this particular stock and we would like to add into the portfolio in every corrective situations," he said. Citi raised its earnings estimates for HUL by 1-5 percent, maintaining a 'buy' call on the stock with a higher target of Rs 2,920 per share. The brokerage's target price implies a 13.8 percent upside in the stock from Tuesday's closing price.
Citi believes HUL is well placed to navigate uncertainties on the macroeconomic front.
Mortan Stanley continued with an 'equal-weight' rating on the stock but raised its target price to Rs 2,230. The brokerage, however, is of the view that inflationary pressure might continue to hurt the company's margin in the September quarter.
Catch latest market updates with CNBCTV18.com's blog
Check out our in-depth Market Coverage, Business News & get real-time Stock Market Updates on CNBC-TV18. Also, Watch our channels CNBC-TV18, CNBC Awaaz and CNBC Bajar Live on-the-go!