HCL Technologies Ltd. narrowed its full-year EBIT margin guidance despite the company surpassing street expectations on most fronts. It has also raised its full-year revenue guidance.
The company's EBIT margins improved by nearly 100 basis points to 17.93 percent due to operating leverage and efficiency. It now expects full-year margins to be in the range of 18-19 percent, compared to the earlier guidance of 18-20 percent. The margins were also higher than a CNBC-TV18 poll of 17.4 percent. The Noida-based IT major reported revenue growth of 1.9 percent in US Dollar terms as compared to the June quarter. The absolute number of $3,082 million was in-line with estimates of $3,072 million, according to a CNBC-TV18 poll.
Also Read: Wipro expects December quarter revenue growth of 0.5-2 percent; Attrition moderates for third straight quarter
In rupee terms, HCL Tech's topline increased 5.2 percent compared to the June quarter to Rs 24,686 crore, higher than the CNBC-TV18 poll of Rs 24,465 crore.
In constant currency terms, HCL Tech's revenue grew 3.8 percent from the previous quarter.
The company now expects full-year revenue growth to be in the range of 13.5-14.5 percent, compared to the earlier guidance of 12-13 percent, led by strong growth in the first half of the financial year and deal wins.
On the operational front, HCL Tech's EBIT increased 10.9 percent to Rs 4,427 crore, which is higher than the estimates of Rs 4,264 crore. The company's net profit was also higher than consensus estimates of Rs 3,411 crore, increasing 6.3 percent quarter-on-quarter to Rs 3,490 crore.
Also Read: Wipro’s attrition rate eases to 23%, net headcount addition at 605 HCL Tech won new deals worth $2.38 billion in the September quarter, increasing 16 percent quarter-on-quarter and 6 percent from last year. The company had won deals worth $2.05 billion during the June quarter. It won 11 large deals during the September quarter, of which eight belonged to the services segment while three were from the products division.
The company won a mega deal this quarter. However, the impact of this deal win will be minimal in the current financial year. However, it will contribute to an average contract value of $125 million annually starting financial year 2024. HCL Tech did not share more details on the same due to client confidentiality reasons. 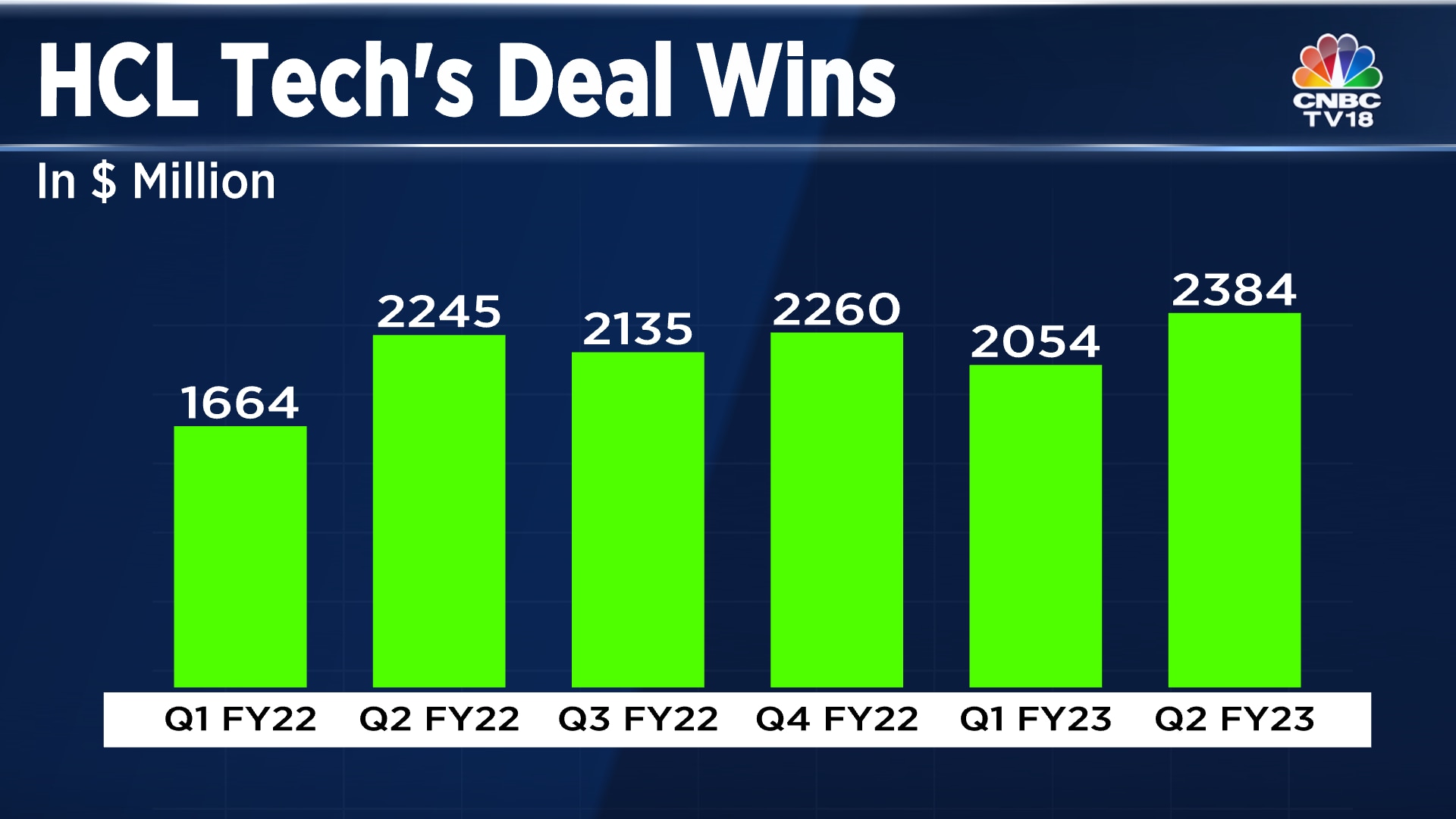