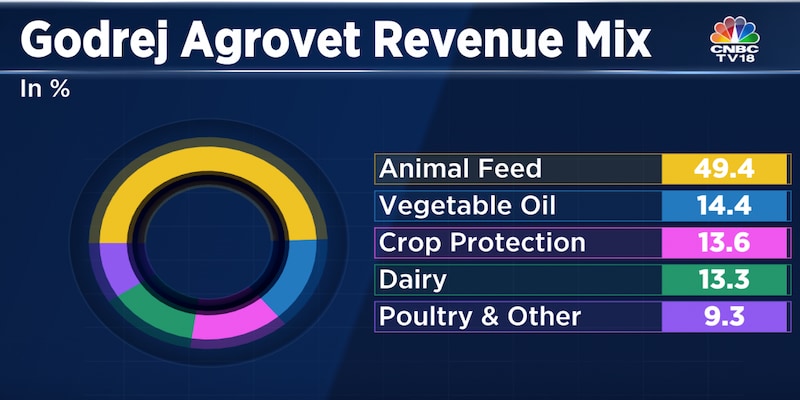 The stock has corrected 25 percent from its 52-week high of Rs 608 in November last year. Shares are down 11 percent this year.

Shares of Godrej Agrovet Ltd., India's largest producer of crude palm oil and leading animal feed player in the country, are back to their IPO price of Rs 460. The stock made an intraday low of Rs 464.90 on Wednesday. The stock has corrected 25 percent from its 52-week high of Rs 608 in November last year. Shares are down 11 percent this year.
Godrej Agrovet is India's leading compound feed player, present across cattle feed, poultry feed and aqua feed. It is also the leading animal player in Bangladesh through a 50:50 joint venture with ACI Godrej. It is also the largest producer of crude palm oil in India, with a market share of close to 30 percent. The company is interested in crop protection through a majority stake in Astec LifeSciences, dairy, poultry and processed food through a 51:49 JV with Tyson India Holdings.
Godrej Agrovet's animal feed business is the largest business segment, contributing to nearly half of the overall top line. According to its annual report, one bag of animal feed is sold every second. It has over 30 manufacturing plants in India for this business.
For the September quarter, Godrej Agrovet's core Animal feed business grew at 7.6 percent, the slowest in the last six quarters. The earlier five quarters had growth ranging between 25 percent to as high as 50 percent. A slowing core business meant the company's overall topline also witnessed a growth of only 4 percent year-on-year, which is also the slowest since the March quarter of the financial year 2021.
Godrej Agrovet's MD & CEO Balram Singh Yadav highlighted during their earnings call last week what plagued the animal feed business this time. He referred to Bangladesh, where the company is number two in the animal feed business. Problems began there when the government imposed price controls on poultry feeds.
"Unfortunately, poultry feeds used to be the most profitable product. But in the first half, it has become a loss-making product. That hurt us a lot in Bangladesh," he said during the earnings call.
A report in The Daily Star in June this year spoke of waning demand for chicken meat due to the cost of major feed ingredients - maize, soyabean meal, and soyabean oil shot up to exorbitant levels. Many farmers were forced to shut shop as they could not afford the high production costs.
However, Yadav also mentioned that as costs have dropped, profitability has returned to the business in October and is likely to build in the future.
Another geography that the MD & CEO referred to was Andhra Pradesh, where the government has imposed a price control on aqua feed and fish feed. "(This) is not from the point of view of controlling inflation, but purely politics," he said.
Post its quarterly earnings, brokerage firm Motilal Oswal maintained its buy rating on Godrej Agrovet with a price target of Rs 580, which is still well below the peak of over Rs 700 that the stock witnessed in April 2018.
The brokerage expects Godrej Agrovet's consumer protection business to do well, led by product launches and better performance from Astec Lifesciences. It also expects the animal feed business to capture a higher market share courtesy of its new product launches.
Check out our in-depth Market Coverage, Business News & get real-time Stock Market Updates on CNBC-TV18. Also, Watch our channels CNBC-TV18, CNBC Awaaz and CNBC Bajar Live on-the-go!