The Enforcement Directorate is probing leading commercial vehicle manufacturer Ashok Leyland for alleged sale of vehicles that violated pollution norms in defiance of the orders by the Supreme Court of India. According to a press release by the ED, the agency is probing former MLA JC Prabhakar Reddy and Gopal Reddy and their companies for allegedly violating Supreme Courts 2017 order banning sale of BSIII vehicles.

The ED has said that they have gathered fake invoices from Nagaland RTO authorities and original invoices issued by Ashok Leyland for some vehicles sold as scrap. 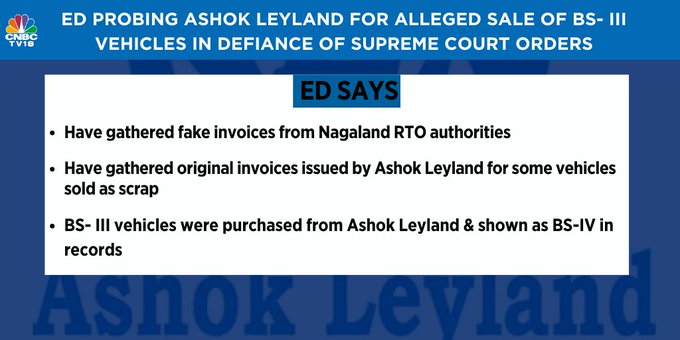 BSIII vehicles were purchased from Ashok Leyland and shown as BSIV in records.
Also read: Ashok Leyland eyes record sales and double-digit margin in FY24
Crime proceeds quantified at Rs 38.6 crore and properties worth Rs 22 crores in the name of companies of Prabhakar and Gopal Reddy have been attached.
Meanwhile Ashok Leyland has issued a statement and said that the matter reported seems to be pertaining to an old investigation from the year 2020 -2021. The automaker further said that the investigation is not against Ashok Leyland, but against a third party scrap customer.
"We have submitted all documents and details as required by the Enforcement Directorate pertaining to this matter, which clearly establishes that we are not implicated in any manner. Ashok Leyland is compliant with all emission requirements," added the company.
Following the news shares of Ashok Leyland have fallen nearly 2 percent from day's high and are trading at Rs 147, down 0.4 percent from the previous close on the BSE.
Check out our in-depth Market Coverage, Business News & get real-time Stock Market Updates on CNBC-TV18. Also, Watch our channels CNBC-TV18, CNBC Awaaz and CNBC Bajar Live on-the-go!
Tags