Shares of Divi's Laboratories had corrected last month on a brokerage note which estimated a sequential revenue decline of as much as 20 percent.

Hyderabad-based drugmaker Divi's Laboratories Ltd.'s margin sustainability will be in focus when it reports its September-quarter results on Monday, November 7.
The company's margin had dropped nearly 600 basis points sequentially in the June quarter as the Molnupiravir opportunity tapered coupled with a slowdown in its base business.
"Yes, we had enjoyed the run and we have completed all the orders for Molnupiravir which we have received and we are waiting and discussing further orders," Managing Director Murali K. Divi had mentioned during the company's June quarter earnings call in August this year.
On other parameters, a CNBC-TV18 poll expects a low-double-digit growth in revenue led by a possible recovery in the generics business but the company's operating performance is likely to be muted. 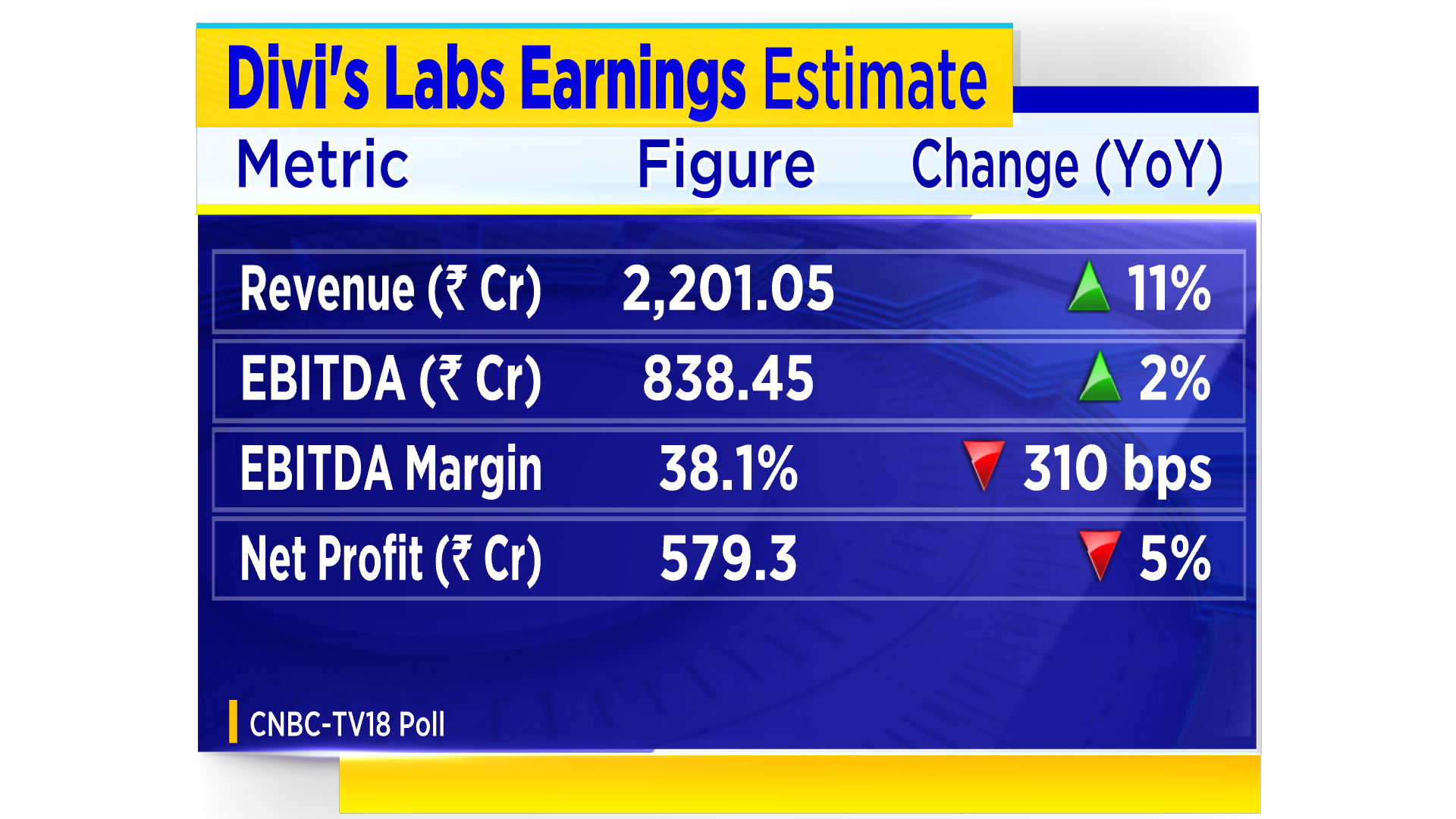 The stock had corrected last month on a note from brokerage firm IIFL, which estimated that the company's revenue can decline as much as 20 percent sequentially during the September quarter. The note said that the decline will be due to the base business as well as Molnupiravir supplies getting impacted, which will test the sustainability of the company's margin.
Aside of these expectations, the CNBC-TV18 poll expects the company's revenue to decline 2 percent compared to the June quarter. Molnupiravir supplies may also contribute to the weakness in the company's Custom Synthesis business. Product mix for Generics to Custom Synthesis during the June quarter stood at 47 percent and 53 percent respectively.
Although EBITDA margin is likely to come off on a year-on-year basis, it is expected to remain stable compared to the previous quarter. Raw material costs are partially contained due to contracts and backward integration.
During its June quarter earnings call, MD Murali K. Divi mentioned that the effect on margin will be temporary during these unstable times of high raw material costs and that the company would go back to its previous margin figures within the next one to two years.
"We should be able to maintain the 40 percent EBITDA margin, yes. Actually, we would like to do better, but I think it is up to 40 percent," he said during the call.
Shares of Divi's Laboratories have corrected nearly 30 percent from their peak and are down 20 percent on a year-to-date basis.
Also Read: 'Finally, beat them': Biden on pharma companies and measures taken to control high healthcare costs in US
Check out our in-depth Market Coverage, Business News & get real-time Stock Market Updates on CNBC-TV18. Also, Watch our channels CNBC-TV18, CNBC Awaaz and CNBC Bajar Live on-the-go!