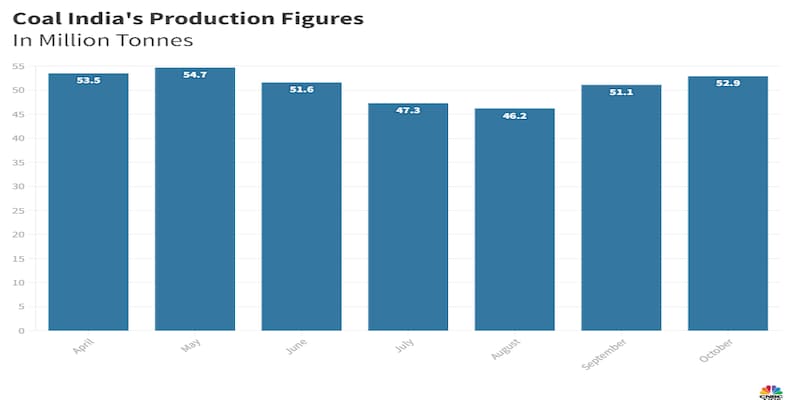 Production for the month of October increased 6.3 percent from last year

India's largest coal producer Coal India Ltd. reported production and offtake figures for the month of October on Tuesday.
Production for the month of October increased 6.3 percent from last year and was the highest in the last five months. Offtake was also the highest in three months. However, on a year-on-year basis, offtake declined 5 percent in October. For the current financial year so far, Coal India's production has increased 18 percent from the comparable period last year while offtake has increased 6 percent. While all units have reported an increase in production between April-October, offtake from Eastern & Western Coalfields are down during this period.
Coal India had achieved 43 percent of its annual production target during the first half of the current financial year. For the April-September period, Coal India produced 299 million tonnes of coal, nearly meeting its 306 million tonnes target. It has a production target of 700 million tonnes for the full financial year.
October's production figures take Coal India's overall production for the year so far to 350.2 million tonnes.
Also Read: Coal India plans 17 projects worth Rs 11,000 crore for green transport of coal
Production split is 44 percent in the first and 56 percent in the second half of the financial year.
Shares of Coal India have increased 14.2 percent over the last month and are trading at its IPO price of Rs 245.
Also Read: The world's fifth largest coal producer is the hottest blue chip stock in India this year - here's why
Check out our in-depth Market Coverage, Business News & get real-time Stock Market Updates on CNBC-TV18. Also, Watch our channels CNBC-TV18, CNBC Awaaz and CNBC Bajar Live on-the-go!