The ITC stock has seen a flare-up even as the "sin" stigma keeps foreign money at bay. For the patient, there's reason to believe time can cause a shift in perceptions.

Smoking isn't a passing fad. Man has been smoking since 5000 BC and I find it difficult to believe he's going to stop now. Be it cannabis or opium or tobacco, man may have changed his tastes over time, but not his habit. Many states in the US have in the recent past legalized marijuana. Who knows what lies ahead? Even research on tobacco consumption indicates that it is set to grow (75 percent of tobacco consumption is through cigarettes).

According to a Grandview report: "The global tobacco market size was valued at USD 932.11 billion in 2020 and is expected to expand at a compound annual growth rate (CAGR) of 1.8% from 2021 to 2028. It has been observed that the number of smokers has been rising at the global level. This trend is further propelled by the launch of new products, including various flavored tobacco products such as clove cigarettes and menthol cigars. These factors together are expected to drive the market over the next few years. Moreover, over the past few years, with consumers gradually inclining toward smoking alternatives, the introduction of innovative tobacco products in varied taste options has become imperative. As a result, manufacturers have focused on premium tobacco products produced with flue-cured tobacco and fine whole leaf.”
The COVID scare
Fear is a big motivator. COVID has had a negative impact on cigarette consumption due to increased vulnerability of smokers to the effects of the virus. Grandview observes: "The COVID-19 pandemic has had a substantial negative impact on the tobacco industry owing to the nature of the disease. People with significant tobacco consumption or any tobacco addiction have been recognized as most vulnerable people of the illness, including Severe Acute Respiratory Syndrome (SARS), Middle East Respiratory Syndrome Coronavirus (MERS-CoV), cardiovascular diseases, and other pulmonary diseases. Therefore, any smokeless and smoke products are receiving negative attention due to their associated health risks.”
Also read | ITC's 8% upswing delights market; biggest intraday jump since May 2020
What's also hit smoking is the lockdowns, as a significant quantum of consumption is out-of-home, but that should start to change now with the unlocking of activity across the country. In fact, ITC has indicated that consumption has reached pre-Covid levels.
What's more analysts too don't see cigarettes in a de-growth phase. Brokerage CLSA in its recent report on ITC has estimated gross revenues from cigarettes to grow from near Rs 20,000 crore last year to over Rs 25,000 crore in fiscal 2024. It also sees operating profits (EBIDTA) expanding from Rs 13,000 crore to Rs 16,000 crore over the same period. 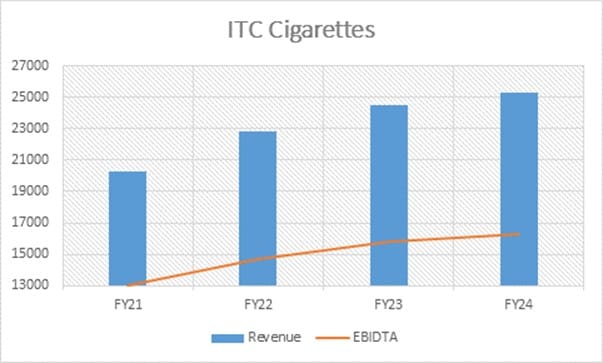 Cigarettes aid expansion
It is also important to note here that the cigarettes business is a highly profitable, cash generating business. It contributed Rs 13,500 crore to the company’s profit before interest and tax as compared to less than Rs 850 crore by the other FMCG business, that's the focus of most analysts and investors.
In fact, the cigarettes business is the cash cow that helps drive investments in other key businesses like foods, personal care, paper & stationery and hospitality. In light of this, the calls for segregation of businesses to unlock value for shareholders through listing gains that's being spoken about may not make as much business sense. Also, future fund transfers from one company to another will be scrutinized by shareholders from a value transfer perspective. So, such a move is unlikely till the other businesses are able to fend for themselves.
The sin factor
Not wanting to be seen as supporting an industry that “kills”, foreign investors have been selling out of ITC. From an over 20 percent holding in the company about 5 years ago, they now hold less than 12 percent. This even as ITC score well on ESG vis-à-vis global tobacco players and also when compared to several domestic FMCG peers. The company in its annual report says: "Your Company sustained its ‘AA’ rating by MSCI-ESG - the highest amongst global tobacco companies. It has also been included in the Dow Jones Sustainability Emerging Markets Index - a reflection of being a sustainability leader in the industry and a recognition of your company’s continued commitment to people and the planet. The Kovai unit was awarded Platinum rating by the Alliance for Water Stewardship Standards which is the highest recognition for water stewardship in the world. The unit is the first site in India and the first paper mill in the world to achieve this recognition." But this will unlikely assuage concerns of it being a tobacco seller, at least in the near term. The longer-term, in my view, is a different story.
Also read | Market Unplugged Podcast: Another midcap shakeout coming; ITC's risk reward ratio favourable
Selling alcohol doesn’t attract such aversion, nor does selling carbon-emitting automobiles or fossil fuel production or taking lives (the entire animal meats industry) or mis-selling drugs (a known medical-pharm industry nexus). The moral standards regarding smoking, which is a matter of choice, seem quite misplaced. Also, it doesn’t explain why, despite all the warnings and healthcare risks highlighted by the medical and pharmaceutical industry (that sells drugs to help you quit smoking), people still continue to smoke. Hence, there’s reason to believe that as the nature of products evolves, less hazardous to health, the sentiment towards the industry will change.
And here ITC’s efforts to emphasise its “responsible” credentials too will help.
There’s also FMCG
Over the past 10 years, ITC’s FMCG business (ex-cigarettes) has grown from three-fold from about Rs 4,600 crore to just under Rs 14,800 crore. And this has been a segment that has drawn much investor attention. While the company has done a good job of building brands that today rank it among the top 2 in most categories, the profitability of the business remains well below peers.
BRAND RANKING
Aashirvaad is No. 1 in Branded Atta
Sunfeast is No. 1 in Cream Biscuits
Bingo! is No. 1 in the Bridges segment of Snack Foods
Classmate is No. 1 in Notebooks
YiPPee! is No. 2 in Noodles
Engage is No. 2 in Deodorants
Fiama is No.2 in Body Wash
Mangaldeep is No. 2 in Agarbattis
While ITC's FMCG business revenues are no less than most peers its profit margins are relatively slim. And that’s been a matter of some concern, even as the company and analysts now see the margin trajectory improving with lesser investments and exploitation of adjacencies through brand extensions and strategic acquisitions.
So, the FMCG story too could start looking better, but we’ll need to wait to see how things really play out.
What stubbed the stock
It is tough to put a finger on one thing that could have led to the significant underperformance of the ITC stock. A trackback reveals several issues that could have contributed to its lackluster performance.
First, revenues have been mostly flat since fiscal 2019, and return ratios have been on a downward trend since 2015. Not a recipe for investor comfort. 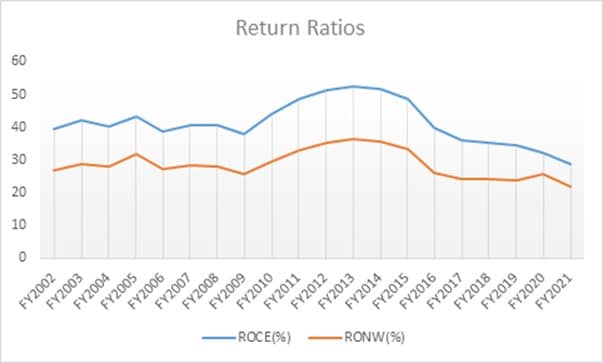 What's also coincidental is the untimely demise of YC Deveshwar in May 2019. Could that have played on investors’ minds too? Were they preferring to wait and watch how Sanjiv Puri steers the ship? These are questions to which there are no clear answers.
What's also likely to have impacted sentiment is Covid. There would have been fears that the pandemic putting the spotlight on lung power could significantly dent the future prospects of the business. That doesn’t seem to be the case, we now know.
But above all, there's the lingering “smoking kills” tag that weighs on investors’ minds. And that’s kept the stock under pressure since 2017.
Chained by smoking
ITC realizes the investor discomfort with its cigarettes business. Its presentations and communications are thus focused more on the FMCG and other businesses. That the company has the capability to launch and build consumer brands is unquestionable — in fact HUL and ITC have long been regarded as organisations churning out some of the best marketing people in the country. So, that business clearly holds promise, as does its paper and stationery wing. The one trouble point for investors has been the hotels business, which insiders too admit survives on the parent’s support.
The big question for the ITC stock is whether investors will have a change of heart with respect to the smoking stigma and embrace the significant value the stock offers with an operating cash flow yield of over 4 percent. I’m betting over time they will.
Check out our in-depth Market Coverage, Business News & get real-time Stock Market Updates on CNBC-TV18. Also, Watch our channels CNBC-TV18, CNBC Awaaz and CNBC Bajar Live on-the-go!