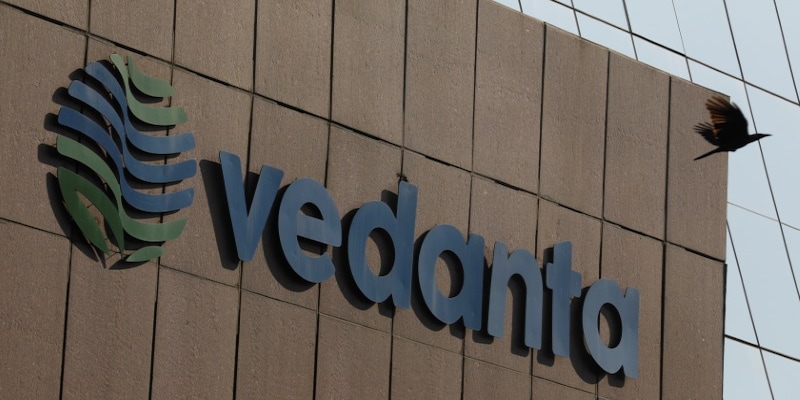 The exercise has put the spotlight on valuations of holding companies, leading to a conundrum for shareholders

To be true, there is no fair or unfair price of a share. The price at which you can buy/sell the stock is the fair price at that point in time, for all practical purposes—because there are myriad factors that go into determining it. But let’s first look at the divergence in views on Vedanta’s stock price, and why the interests of stakeholders are conflicted.
THE CONFLICT OF INTERESTS
The Vedanta Group wanted to delist Vedanta Ltd to acquire direct control of its cash-rich subsidiary, Hindustan Zinc. The group’s holding company Vedanta Resources has a debt of about $6.7 billion (~Rs 49,000 crore) and Vedanta Ltd is its primary source for cash flows to service its obligations. And while Vedanta earns a hefty sum as dividends each year from Hindustan Zinc, and has a policy to pay this through to shareholders, half of this accrues to public shareholders. Given this, and the low market value of Vedanta, it was a no-brainer, sweet deal to delist the shares and gain direct control of Hindustan Zinc. Consider this, given the average interest and dividend income for Vedanta of Rs 4,250 crore over the past two years it could buy out the public shareholders with this in a little over 4 years at the current market price. Besides, owning shares of Hindustan Zinc directly can allow the group to more easily leverage its value, as the market value of its Vedanta holding is far lower.
Amounts in Rs cr
It is also possible that the promoters were more than a little upset over how the shares of their company, Vedanta, have been valued by the market—trading at a significant discount to the market value of even its holding in Hindustan Zinc.
Direct control over Hindustan Zinc would have given easy access to the large cash pool of the company of about Rs 20,000 crore net of debt. And getting the zinc maker to pay heftier dividends would likely be par for the course, as long as it didn’t impair the company’s financial position, as the Government with a near 30% stake can also do with the money.
Large investors in the company clearly saw this for what it was—an attempt to buy out public shareholders cheap—and stymied the attempt. But that hasn’t left the small investor any better off. The stock price, which hit a high of Rs 136.90 before the delisting exercise has now receded to Rs 95. And brokerages aren’t projecting a valuation of anywhere near the Rs 320, but mostly near ~Rs 120. Why’s that?
MARKET UNDERVALUES HOLDINGS
While the undervaluation of Vedanta’s holding in Hindustan Zinc might appear quite severe, holdings of companies are generally valued well below par by the market. One reason for this is, of course, the tax incidence on any sale of shares by a holding company before the final payout to shareholders. The other is the monetization factor. The likelihood of a stake being monetized (or a monetization event) within a reasonable timeframe, or the unlikelihood of it, determines the extent of value the market is willing to ascribe to it. Hence, where there is little likelihood of monetization, the discount to market valuation is steep and vice versa.
Take the example of the marquee home lender, HDFC. It has prized holdings in HDFC Bank, HDFC AMC, HDFC Life Insurance, HDFC Ergo among other subsidiaries. In its case, there is a significant discount of about 30 percent (using market value of the presently listed arms), if you value it at about 2x its book value. Still, this discount would be lower than many other cases because the company has monetized some holdings and has scope to do more in some like HDFC AMC, besides, initiating such a move in the subsidiaries like HDFC ERGO.
Amounts in Rs cr
In contrast, if you take the case of Grasim Industries. The valuation discount is far steeper, as the prospect of monetization of any of its equity holdings is very low. In fact, the value of its holdings in group companies far exceeds its own market capitalization.
Amounts in Rs cr
In Vedanta’s case too, the company’s valuation has been less than the value of its holding in just Hindustan Zinc since 2019. At Hindustan Zinc’s current market capitalization of Rs 89,500 crore, the value of Vedanta’s holding of 64.92 percent is Rs 58,000 crore, which exceeds Vedanta’s market capitalization of Rs 35,000 crore. 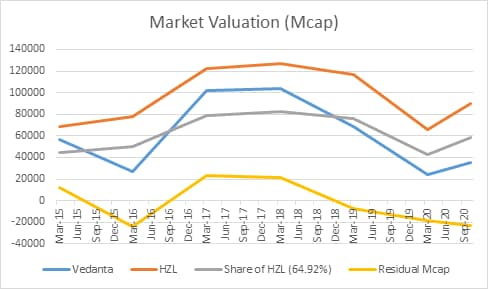 And here it pays to note that Vedanta has significant other businesses and subsidiaries, whose value is also inadequately reflected.
While this may seem like a stark undervaluation, there are some valid concerns that are weighing on the valuation. Most importantly, what action the Group takes, now that the delisting has failed, to raise money to pay off its debt.
Here there are two easily apparent options: get Vedanta Ltd to pay higher dividends (equitable for shareholders) or to lend it money (which again will need to be returned from dividend accruals). The other, by virtue of its parent not having too many other sources for significant cash, is the Group leverage, which implicitly needs to be serviced with the resources of Vedanta Ltd.
It is worth noting that Group debt and concerns about servicing it aside, Vedanta is in fairly healthy shape as far as cash flows go and it should be able to service its debt obligations without much trouble or help from Hindustan Zinc.
This raises the question: what should those holding the Vedanta stock do now?
UPCYCLE AND DIVIDEND HOPE
Investors in Vedanta need to be clear about a few things. First, the nature of its business is cyclical, and therefore it is unlikely to compound money over time in a linear fashion. Second, the company could often find itself in prickly situations—like the shutdown of its copper smelter in Tamil Nadu or the suspension of iron ore mining in Goa—because the nature of the mining business invites opposition from varied interest groups like environmentalists and social workers, besides the regulatory tangles. As a consequence, advocacy and lobbying to further or protect their interests is part of regular business practice. Governance, therefore, needs to be seen in the context of the business challenges—it is the nature of the beast. And this limits the multiples that would be ascribed to earnings for such companies.
That said, in Vedanta’s case today, there are a couple of reasons for hope. First, as per a report prepared by governance research firm SES, Vedanta’s dividend policy requires that it distribute all dividends received from Hindustan Zinc to its shareholders. And given that it has not passed on ~Rs 4,500 crore of dividend received in the last fiscal so far, and the Hindustan Zinc board is set to consider an interim dividend at its board meeting on October 20, there could be a dividend bonanza round the corner.
The other reason for hope, is that the industry could be near the start of an upcycle, and historical stock prices suggest that while the returns over long periods—point to point may be disappointing, cyclicals tend to deliver superlative returns during upcycles. So, if the industry fortunes do really turn, shareholders may get an opportunity to cash out with some gains from here. 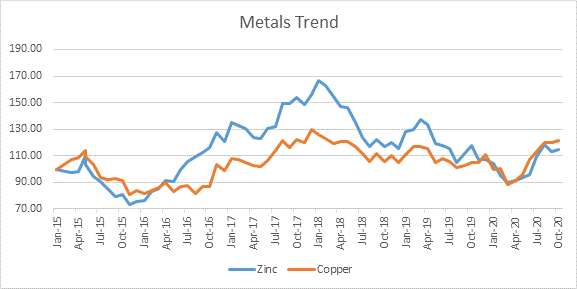 In general, though, investors should avoid investing in holding companies without clear monetization plans, as they rarely deliver healthy returns. In case of Vedanta, for instance, investors would have been better off investing in Hindustan Zinc.
For now, the odds seem to favour investors staying put in Vedanta. Don’t expect the stock to scale to Rs 320 anytime soon. I’d be surprised if it does.
Click here for previous articles in the Bottomline series.
(Edited by : Nazim)
Check out our in-depth Market Coverage, Business News & get real-time Stock Market Updates on CNBC-TV18. Also, Watch our channels CNBC-TV18, CNBC Awaaz and CNBC Bajar Live on-the-go!