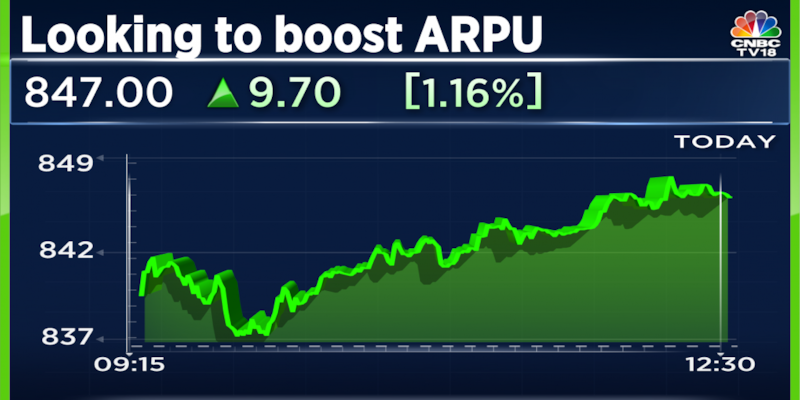 The Rs 155 plan will offer unlimited voice and 1 GB data over a 24-day period, according to broking firm IIFL.

Telecom major Bharti Airtel has reportedly discontinued the entry level plan of Rs 99 in two circles - Haryana and Odisha last week.
Post the discontinuation of the plan, the cheapest plan in these two circles for a period of 24 days is Rs 155.
This would mean that the entry-level Average Revenue per User (ARPU) would increase over 50 percent but also allow more incentives and perks to the users.
The Rs 155 plan will offer unlimited voice and 1 GB data over a 24-day period, according to broking firm IIFL.
As of date, Odisha and Haryana combine to form 4.8 percent of Bharti Airtel's total subscribers and 4.4 percent of the Adjusted Gross Revenue.
Shares of Bharti Airtel have recovered substantially from the session's lows, post this news.
Also Read: Fitch affirms Bharti Airtel ratings at 'BBB-' on strong balance sheet and favourable environment
Bharti Airtel's ARPU has increased steadily over the last few quarters and is nearing its near-term target of Rs 200. Chairman Sunil Bharti Mittal envisages the company's ARPU to hit Rs 300 over the long term. For the September quarter, ARPU stood at Rs 190.
IIFL believes that the company is testing waters before extending this move on a pan-India basis. It suggests that Bharti is looking to exploit pockets of opportunity where competition from Reliance Jio is relatively lower.
The brokerage alluded to a similar move earlier by Bharti Airtel in early-July 2021, post which, it extended it across the country by the end of the month.
The entry-level plan has seen multiple price hikes in recent years – from Rs 49 in pre-July 2021 to Rs 79 in July 2021 to Rs 99 post November 2021. "The most recent tariff increase experiment comes at a time when there is pressure on the low-ARPU segment due to inflationary pressure," IIFL wrote in its note.
IIFL also expects Vodafone Idea or Vi to follow suit if Bharti Airtel ends up implementing this plan across the country. It believes that the 2G user segment is less vulnerable to aggression from Reliance Jio.
Morgan Stanley also says that for Bharti Airtel to see sustained re-rating, they need to see a positive reaction from competition as well.
Shares of Bharti Airtel are trading 1.1 percent higher at a 52-week high of Rs 847.
Also Read: Airtel 5G now in Delhi, Mumbai and 6 other cities — Sunil Bharti Mittal says will cover India by March 2024
Check out our in-depth Market Coverage, Business News & get real-time Stock Market Updates on CNBC-TV18. Also, Watch our channels CNBC-TV18, CNBC Awaaz and CNBC Bajar Live on-the-go!