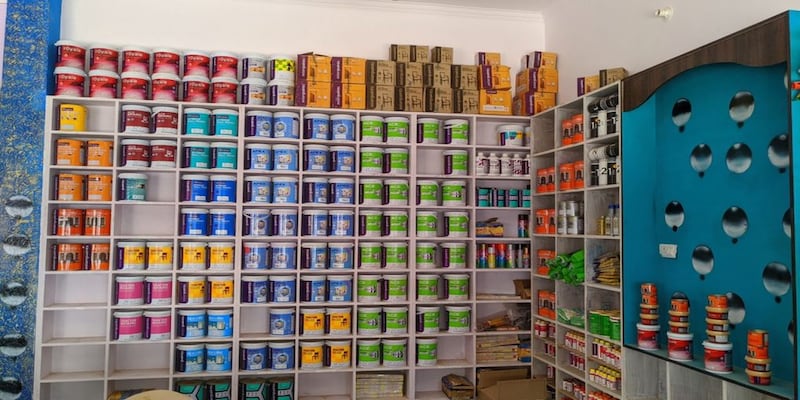 "Grasim is making a big foray in paints and if it starts seeing some market share loss from Asian paints, which is inevitable, some amount of compression of both margins and returns could lead to a period of derating," said Sanjeev Prasad, MD & Co-Head, Kotak Institutional Equities.

Asian Paints is India's largest paintmaker by market capitalisation. But the paints company is likely to lose some of its value on Dalal Street, as per Sanjeev Prasad, MD and Co-Head at Kotak Institutional Equities.

In an interaction with CNBC-TV18, Prasad said he believed the stock would "go through a period of derating". “If you are buying Asian Paints at a price-to-earnings multiple of 60 times, chances are that you will probably not make too much money, at least for the next 2-3 years," he said.
As an investor, you might think, what is making him say so? Well, he pointed towards Grasim and said, "The firm is making a big foray in paints, and if it starts seeing some market share loss from Asian Paints, which is inevitable, there will be some amount of compression in both margin and returns."
Last year, the Aditya Birla Group flagship company Grasim said it aims to begin paint production in the quarter ending March 2024. Grasim already sells Birla White, a popular putty brand people use to smoothen walls before painting them. Birla White is among the top three products in the segment including JK Cement and Asian Paints putty brands.
Earlier, global brokerage Macquarie had said that it sees no threat to the paint sector leader Asian Paints with Grasim's entry as the latter needs time to build a brand image.
Even Kumar Mangalam Birla, chairman of Aditya Birla Group, had said Grasim would be a very strong No.2 in the next five years.
Prasad said  Asian Paints is a fantastic company. "But buying at 60 PE (price to earnings multiple), given all the headwinds which are there, I am not very sure whether one would make money over here — that’s the challenge for so many stocks now,” he said.
Also Read: Understanding ESOP costs and why EBITDA of new-age tech companies shouldn't include it
Asian Paints undertook four price hikes over the last 12 months. Still, September quarter results came below Street expectations. The company reported a 200 basis points dip in gross margin compared to the June quarter but it was up 100 bps from the same period last year. The company had previously said that it wanted to maintain its margin around the 18-21 percent mark over the medium term.
Asian Paints has planned to invest over Rs 6,750 crore over the next three years, of which Rs 3,400 crore will go towards capacity enhancement by more than one thirds.
That compares with Grasim's plans to double capex in its paint business venture to Rs 10,000 crore by the FY25, raising it from an earlier Rs 5,000 crore investment envisaged by FY24.
KRChoksey has a positive near-term outlook on Asian Paints. "Good monsoon should help demand, especially in rural India, in the coming quarters. Despite rains continuing into October, the firm is seeing good festive demand and expects it to be followed by a strong wedding season demand," the brokerage said.
But Capitalmind’s founder and market expert Deepak Shenoy had earlier said he wouldn’t buy the stock. Sharing his reasons, Shenoy told CNBC-TV18, “Asian Paints is the most expensive paint company in the world. It would still be reasonably valued if it were to halve from here. I think corrections are fair in an environment where you have competition and higher interest rates worldwide that demand a lower PE of stocks because you can earn more using debt. Asian Paints has seen deep corrections earlier. So, I wouldn't be a buyer at this point. I think it will correct simply because it's been overvalued so far.”
Also Read: New Microsoft report highlights urgent sustainability skills gap
(Edited by : Sangam Singh)
Check out our in-depth Market Coverage, Business News & get real-time Stock Market Updates on CNBC-TV18. Also, Watch our channels CNBC-TV18, CNBC Awaaz and CNBC Bajar Live on-the-go!