TRADE
Gurugram-based Apollo Tyres — one of the country's major makers of tyres and second only to MRF in sales — is optimistic on sustained growth in its ultra-high performance business. Its performing well in the segment, where its share has risen to 42 percent, Apollo Tyres Vice Chairman and MD Neeraj Kanwar told CNBC-TV18.
"That's really good for the company because it does expand our profit... The focus on ultra high performance tyres is giving us very good growth," he said.
His remarks come at a time when the prices of key materials used in the tyre industry have eased after peaking out earlier this year. Rubber and crude oil are two main inputs used for the making of tyres.
ALSO READ: Oil rates fall 12% in 11 days. Here's how low they can go
Kanwar said Apollo Tyres saw healthy growth in the July-September period, with revenue growth coming in at 17 percent.
Earlier this month, Apollo Tyres reported a rise of 11.9 percent in net profit to Rs 194.4 crore for the three-month period compared with the corresponding quarter a year ago. Its revenue increased to Rs 5,956 crore — up 17.3 percent on a year-on-year basis.
Both profit and revenue far exceeded Street expectations. Analysts in a CNBC-TV18 poll had pegged the company's quarterly net profit at Rs 159 crore and revenue at Rs 5,749 crore.
Apollo Tyres' margin — or the degree to which a business makes money — came in at 12 percent, better than the analysts' estimate by 70 basis points.
He said the company's volumes in Europe increased nine percent, and its growth of 14 percent in passenger cars was on account of: While growth in the India business has aided the profitability for Apollo Tyres, the company is focused on improving its product mix to sustain its pricing policy.  "I'm happy to say that we've also had a margin expansion in India... We've been holding up on our prices while our truck volumes have gone down. Today, our mantra is very clear on profitable growth," he said.
Kanwar also said the launch of its Vredestein brand in India is receiving a good response. Apollo Tyres announced the launch of premium European brand Vredestein in India last month.
Apollo Tyres have largely remained flat in the past one month — a period in which the Nifty50 benchmark has risen 4.2 percent. 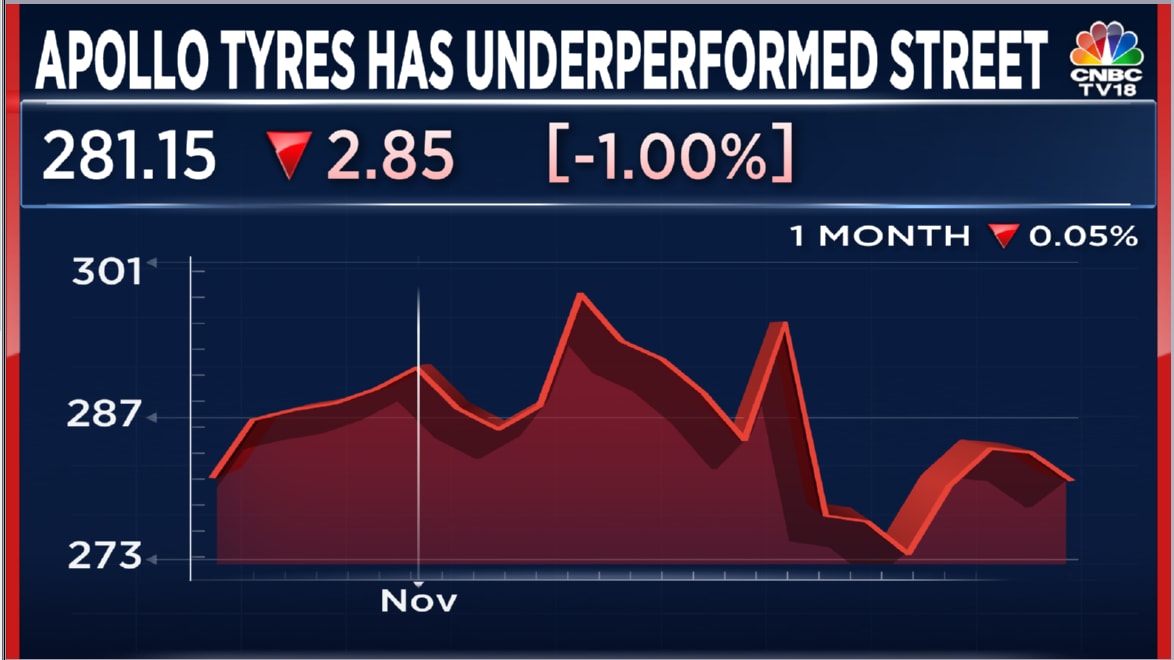