BOTTOMLINE: The resurgence of Tata Group is underway

Updated : December 12, 2020 09:58:50 IST
The most important factor is the decision of the Group to focus on positive free cash flow generation
The other important area of focus of the group has been to exit non-performing and non-core businesses, and realign existing businesses based on synergies

After some years of grappling with mounting debt and a high-stakes corporate battle, House of Tata is getting back on track. Here’s why this could be just the start of its resurgence.

I have long held the view that the person who helms the ship charts its destiny. Hence, for investors, the promoter and management of a company are of utmost importance, all else is secondary.

This is being very amply demonstrated today at Tata House, with the focus clearly returning to the most important factors that should drive business. I’ll get to these in a bit. But first, for a taste.

On December 7, Titan Company informed the stock exchanges that it had asked the management of its Swiss arm, Favre Leuba, to scale down operations immediately so that Titan would not need to make any further investments. That seems to be a common theme across the group today, and I like it.

To better appreciate its significance, it will help to understand the context. To offer a perspective, we ran some numbers for 21 of the group’s listed companies, excluding Tata Consultancy Services because it has had a healthy growth trajectory on all fronts. Here’s what we found.

Over the past 15 years, the aggregate turnover of these 21 companies has grown from about Rs 70,000 crore to over Rs 500,000 crore. That’s about 6.8x, but operating profits have grown only about 4x and profit after tax has actually declined after peaking in 2018. To be fair, operating cash flows have grown about 8x, but free cash flows have declined about 4x. The culprit is the rapid expansion, funded by debt. While the assets or Gross Block grew 12x, debt swelled 16x over this period. And the average return on equity (ROE) for these companies slipped from near 30% to just about 10%.

So, while the group acquired scale—and we shouldn’t undermine its importance—it was not without some pain. Meanwhile, TCS continued its healthy run, with its cash flows swelling, and that offered some comfort. But the cash drain was clearly a concern, with Tata Motors being the key culprit. And in 2019, this went out of whack. 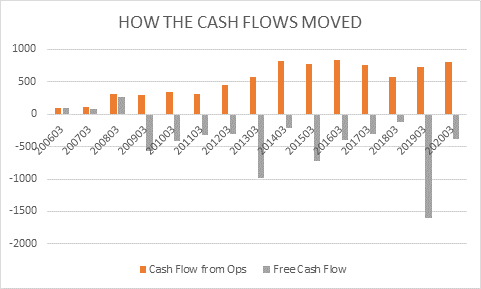 It is in this context, that an interview of N Chandrasekaran, Chairman of Tata Sons, with CNBC-TV18’s Shereen Bhan, became a significant point in reshaping my view of the Group’s prospects. The clear emphasis on generating strong cash flows and refocusing businesses to ensure sustainable growth were the key takeaways. And to see this clear focus being translated into real action is what has given me and the street great comfort.

For some time now, there has been a clear focus across Tata companies to stop the weaker arms of the business from bleeding the profitable ones—at some level this would also apply to other entities milking TCS via Tata Sons. This focus was clearly articulated in the case of Tata Motors when it was promised that Jaguar Land Rover (JLR) would turn cash positive. In the case of Tata Steel too, it was clearly spelt out that no more money would be put into the European operations, which had to become self- sustaining. Thus, the move by Titan to turn the screws on Favre Leuba is not surprising.

A recent announcement on the likely sale of Tata Steel's Dutch arm is another instance of the management reiterating its stance. TV Narendran, CEO and managing director, told the media that post the sale of the Netherlands business, the aim was to make the UK business self-sustaining, without help from the parent in India.

To me, the most important factor is the decision of the Group to focus on positive free cash flow generation. Cash flow for me is the holy grail, all else is blah. It is the lifeline for any business, its blood, and it must be maintained at a healthy level at all costs. In this context it is heartening to note that Tata Motors has turned free cash flow positive in the second quarter of this fiscal—JLR reported FCF of £ 463 million and Tata Motors (standalone) Rs 2,300 crore—and its Chief Financial Officer, PB Balaji, recently told CNBC-TV18 that JLR “will have the most exciting product portfolio and will be cash flow positive from FY22”.

In the case of Tata Steel, while its European operations have been a drag and it has a net debt pile of about Rs 1 lakh crore, the operating cash flow picture was never quite that bad. In the last fiscal it generated net operating cash flows of about Rs 20,000 crore, which after deducting the interest outflow of about Rs 7,000 crore, still left Rs 13,000 crore for capex and to pare debt. And this in a year with COVID headwinds at the close. If you factor in a revival in the steel cycle—not sure if what we are witnessing now is it—and a recovery post-Covid, the cash flows could significantly improve if Europe stops to bleed.

The other important area of focus of the group has been to exit non-performing and non-core businesses, realign existing businesses based on synergies, refocus businesses on the growth verticals and strengthen those that are profitable.

Staying with Tata Steel, if the Europe business is ring-fenced or exited, the prospects start looking very different. If Make in India and the PLI schemes do manage to charge-up the Indian economy, demand for steel should grow. And the company, with acquisitions of Bhushan Steel and Usha Martin’s long products business (a move to strengthen the core), and the second phase of expansion at Kalinganagar from 3 million tonnes per annum to 8 million tonnes per annum, is well poised to reap the benefits with its expanded capacities.

In the case of Tata Motors, the move to hive off the passenger vehicle business into a subsidiary and look for a partner, I think has been long overdue. Making cars is a tough business globally. And while I’m the least optimistic about the prospects of traditional carmakers—given the rapid innovations and tech majors, besides Elon Musk, wading in that set it up ripely for disruption—a partner with the right technology and consumer marketing skills can help give the business a fighting chance. Just to illustrate, my conversation with technology companies catering to the auto sector clearly indicates that Indian automakers have a long way to go up the curve versus their global peers, who are innovating with new technologies in a myriad ways.

But what might come as a surprise to many, a company that I’m most optimistic about within the group is Tata Power. And at the root of this again is a twin focus on deleveraging and realignment of the business focus. Tata Power has sold off assets, got a Rs 2,600 crore capital infusion from Tata Sons, and is looking to hive off 2.7GW of renewable assets to deleverage its balance sheet.

On the business front, it is focusing on renewables—not just creating capacities for itself, but for others—and electric vehicle (EV) infrastructure (charging stations) and power distribution. While I have no great understanding of renewables and EVs as sectors, most experts speak of them as sunrise businesses (no pun intended), so the prospects should be bright. But what I’m upbeat about is the potential for growth in the power distribution business. Tata Power recently won rights to 11 circles in Odisha and it is expected to win another lot in the state. The recent win, the company indicated in a filing to stock exchanges will add about Rs 4,500 crore in revenues and take its customer base up to near 10 million. With privatisation of distribution likely over the next 5-7 years by several other states, this business can expand significantly To give this some context, the total number of urban households today would likely be well over 100 million (79 million as per 2011 Census). And we aren’t even counting commercial customers here.

So, from drawing about half its revenues from power generation, the composition is likely to shift rapidly in favour of the new business segments. And if its millstone, the Mundra Power project, sees a favourable resolution, it will be the icing on the cake.

Tata Consumer is the other business that has seen a significant revamp with the consumer business of Tata Chemicals being integrated with the existing tea, coffee and water businesses, in an aim to transform the unified business into a true-blue FMCG company. This is an important move and hopefully will deliver gains from synergies and a significant change at the helm—remember how we started this piece. Unfortunately, from 2010 to 2019—before the integration of Tata Chemicals’ consumer business—the revenues of the company have oscillated between Rs 6,000 crore to Rs 8,000 crore, quite unlike other FMCG businesses, where year-on-year growth in a linear fashion is the trend. Can the new team chart a new growth trajectory and break out of this vacillating mold? Time will tell, but all the right noises are being made.

Brokerages across the board are having a change of heart with regard to their outlook for the group, and one suspects this has a lot to do with circumspection turning into conviction with the Group walking the talk. Recent upgrades of Tata Motors, Tata Steel and Tata Power are key instances. 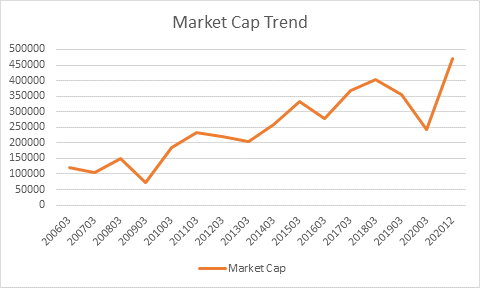 Given where things stand, I’d expect the true nature of the business transformation under way is still not fully factored in and developments (or triggers) along the way could invite further re-ratings. That said, valuations of most stocks in the market today have scaled to levels where upside in the near-term is limited. This holds true for many Tata stocks too. But it may help to keep a watch on this Group’s pack if you are looking to invest for a longer-term.

My wager is, the resurgence of the House of Tata has just got under way.
Tags bottomline Tata Chemicals Tata Group Tata Power
Published : December 12, 2020 09:57 PM IST