Bottomline: Is all well at Havells?

In the marketplace, a company’s channel partners are its force multiplier. If you care for them, they do likewise.

For many years now, Havells has been arranging finance for its 9000-odd channel partners using its goodwill with banks. The amounts are not large—anywhere from about Rs 20 lakhs to a few crore rupees for each partner—and the banks decide on the quantum and terms.

But it is a win-win for all. Banks get to develop new customers, whose sales track can be corroborated with the company. The channel partners get the much-needed liquidity and for Havells, it is a smart way of strengthening its relationship without taking any credit risk.

The other thing that Havells does for channel partners struggling to meet the regular payment schedules, is the issue and discounting of bills. Bills payable by these smaller channel partners are discounted with banks for a factoring charge. This gives Havells its money, and its channel partners more time to pay. But now they need to pay the bank not Havells.

Both the above arrangements are not new. The annual reports for the past four years bear this out. See below: This is partly why the company’s receivables-to-sales ratio is far lower than peers. But then, why don’t peers adopt a similar practice—there are no trade secrets in the market. One reason, perhaps, is that there is a cost attached—discounted value of the bill and factoring charges. Havells paid factoring charges of about Rs 29 crore in the fiscal ended March 31st 2018, which works out to a 35 basis point margin impact, add to that the discount.

While the pros and cons of this decision can be debated, it doesn’t seem to be a corporate governance issue.

Let’s now go beyond this recent development that put the company in the spotlight. Havells has some things going for it, and some against it. Here’s a closer look.

Havells is a strong player in the switchgears, cables, switches, lighting and electrical appliances businesses (ranked among the top 4 across categories). It recently forayed into consumer durables and electronics by acquiring the Lloyds brand from Fedders Lloyd in 2017. The company has a strong retail reach of more than 130,000 outlets—superior to most peers.

The company is also cash-rich, with cash and equivalents of Rs 865 crore at the end of last fiscal, and virtually no debt. It also has a healthy dividend track record—it distributes over 40% of profits each year to shareholders. The return-on-equity is a healthy 17 percent plus and its operations have been generating cash flows of Rs 500-1100 crore annually over the past 5 years. After its profits were hurt by higher import duties on imports of air-conditioners and components, the company has now set up its own plant.

Its big channel partners appear confident about the airconditioner, television and the refrigerator businesses, after the company recently met them to share plans. A distribution rejig, post-Lloyds takeover saw the company expand the base of partners and focus on brand positioning rather than the price. The process, of course, took its toll on performance.

The Havells management says the company is now set to grow more strongly. Also, the anti-China sentiment can only work in its favour, though the gains may not be big or lasting. We’ll get to that in a bit.

While evaluating the track record of companies, analysts usually work with 3, 5 or 10-year timeframes. But in the case of Havells, because of its unique history, we’ve shifted the timeline to 6 years. In 2015, the company’s revenues were Rs 8,569 crore. Today, 5 years on, it is Rs 9,429 crore--a compounded annual growth of under 2 percent. Cash flows from operations too have stayed in the same range—fluctuating between Rs 500 crore and Rs 1100 crore--with the highest generation being in FY18. Havells’ operating profit margins too have been shrinking over the past few years, while peers have shown an improvement in theirs.

Some of this is partly due to change in product mix, as the margins in many segments are at par or better than peers—as revealed in a very detailed report published by HDFC Securities late last month on the appliances sector. But more worryingly, the company’s return on incremental capital employed has been poor.

And that’s the big concern, along with the mercurial trend in cash flows.

To understand this, let us look at the company’s journey since 2015. In that year, the company sold its 80 percent stake in Sylvania Malta to Shanghai Feilo Acoustics Company for Rs 1,100 crore. It also sold its stake in its Hong Kong arm, Havells Exim, to the same buyer for an additional Rs 76 crore. The move, the company said, was aimed at focusing all its energies on growing the domestic franchise. Before the sale, the company reported revenues of about Rs 8,600 crore, operating cash flows of Rs 960 crore and free cash flow of over Rs 750 crore. Two years later, in 2017, the company bought the business of Lloyd Electric for Rs 1,600 crore. At the time, Lloyd’s revenues were estimated at between Rs 1600-1800 crore. Thus, in a way, the money received from sale of one business and some more was ploughed into a new business area to grow the domestic pie. The problem is, that story hasn’t played out the way one would have imagined.

If we look at the addition in gross block and revenues since 2015, the picture is dismal. The value of fixed assets rose by Rs 1370 crore, while revenues are up only Rs 860 crore. That’s a poor 0.6x ratio of incremental revenues to assets. Even if we use the revenues for the previous fiscal (not impacted by COVID-19), the ratio barely improves to 1x.

If we shift the base year to fiscal 2017, after exiting Sylvania but before realizing revenues from Lloyd and look at the increments, the ratio improves to 2.4. However, a study of the cash flows shows that the incremental revenue of about Rs 2,800 crore generated since 2016 is a weak 1.15x the cash deployed in purchases of plant and machinery (including Lloyd acquisition) of Rs 2460 crore. What this brings out clearly is that the foray into the consumer durables and electronics business has clearly failed to deliver so far, and that growth in other business too has not been spectacular enough to offset this. And this is where the core concerns stem from. A lot of good money is being deployed in building capital assets, and unless they deliver, the future growth will be in jeopardy. In this context, the anti-China sentiment and recent government actions could be a tailwind. The impact for the company from restrictions on television imports will be limited—as the product accounts for a very small slice of revenues and the big brands like Samsung and Panasonic are already making in India (it is brands like Haier, TCL and Mi will likely be hit more in the run-up to the festive season). But any extension of such restrictions to other categories like air-conditioners will definitely work in the company’s favour.

Here, though, it is important to understand the lay of the land. Electronics and appliances is a highly competitive business with several well-entrenched global brands like Daikin, Carrier, Whirlpool, Samsung, LG and Sony, as well as strong Indian brands like Voltas and Blue Star. So, the going won’t be easy—unlike the electrical appliances segment which doesn’t have much foreign presence.

What’s also important to understand is that these businesses--more electronics and to a lesser extent white goods-- are prone to frequent technology and innovation-led disruptions. And most of these emerge from the innovation cells of the global majors.

To give you a sense, Samsung has an R&D team of over 10,000 people compared to the 338 at Havells. The global sales of these big brands also allow them to recover such spends quicker and drive down prices, making life tougher for their smaller rivals. The mobile industry is a prime example of such continuous disruptions. Every time Apple releases a new iPhone, it pushes the industry to counter with new features. Every launch also spells a sharp mark-down in prices of its earlier models. So, the big money is made on the new launches even as contribution from older models fall and the least profitable get phased out. The obsolescence rate in televisions and white goods is lower, but it’s there.

While focusing on the base of customers moving from economy to the mass premium segment offers Havells more time, as new technology trickle-down happens with a lag, the big margins are made at the top of the heap. Besides, nothing stops the industry giants from training their eyes on the segment Havells is eyeing. Therein lies the big risk to Havells ambitious plans. And that is why it wants to hedge itself with some contract manufacturing business—remember Samsung learnt by making iPhones.

Investing should always be done with the opportunity cost of an investment in mind. At this juncture, given Havells premium valuations—it trades at 43 times its expected earnings per share for the year to end in March 2022—investment doesn’t seem very prudent. True, this could be the inflection point from where its fortunes turn for the better—new facility for ACs and distribution network in place—but I’d prefer to wait. 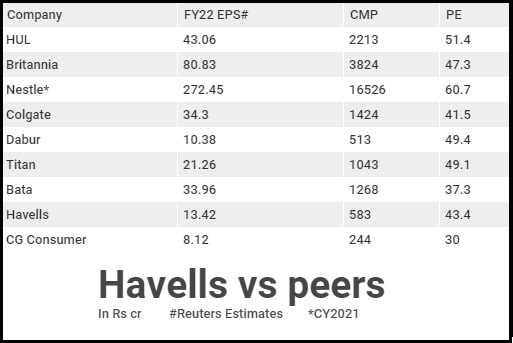 The penetration levels in most segments it operates in are much lower than global benchmarks—ACs at 5 percent, washing machines at 12percent, refrigerators at 33 percent, and so on—and, therefore, an investment after signs of traction should offer a healthy compounding. Besides, at current valuations—similar to many other fast-moving and low-ticket consumer segments—there is very little room for disappointment.

Here, Crompton Consumer Electricals is a company with a similar business—though narrower product range—that has started demonstrating performance. Besides, it trades at a significant discount to Havells, making the Temasek and Avendus backed company a maybe lower-growth but safer investment. There are also other marquee names in our selection of consumer companies below that have long-established brands and businesses, all delivering high RoEs and a clear trajectory of improving profitability.

So use your judgement before taking an investment call. You should invest in companies only if you are convinced of their ability to deliver healthy returns.
Tags bottomline Havells