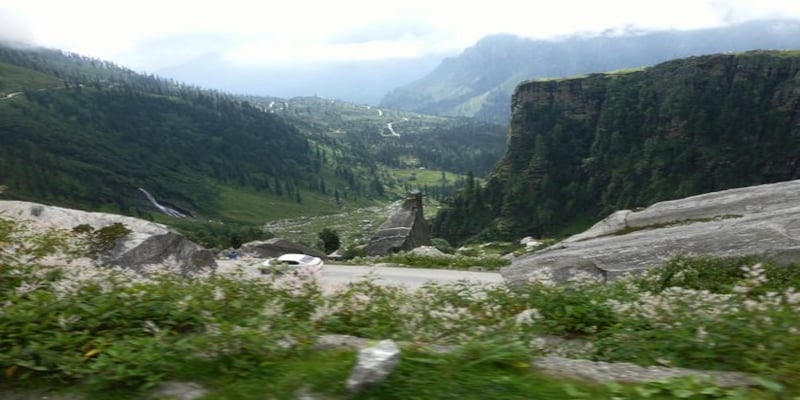 It was located at a place where Italian hotelier and photographer Chevalier Federico Peliti, who was the baker to then Viceroy of Lord Mayo, had constructed his villa. Peliti named this place after his own hometown Craignano

After reducing another British colonial landmark to rubble, the state government is now coming up with a wellness-cum-interpretation centre to attract tourists to this place, now being developed as a nature park amidst blooming red and pink tulips.

A pre-Independence retreat situated at a height of 7,700 feet, Craignano, just 12 km from the state capital and close to quaint Mashobra, the abundance of oak, pine and rhododendron groves had attracted the British here. They had constructed a dak bungalow or rest house that was used as a reading room and to play billiards.
It was located at a place where Italian hotelier and photographer Chevalier Federico Peliti, who was the baker to then Viceroy of Lord Mayo, had constructed his villa. Peliti named this place after his own hometown Craignano, say the state's archives.
"It's really sad to see that Shimla has lost yet another landmark with the decision to raise a wellness-cum-interpretation centre on the debris of a reading room built centuries ago," British tourist Mark Dickson told IANS, while pointing towards the remains of the dak bungalow.
He was perturbed to see the condition of the kitchen, the last British remembrance located close to the demolished dak bungalow, which is succumbing to the ravages of time and neglect.
"This structure (kitchen) is threatened with destruction if no substantial restoration work is done immediately," remarked another tourist, Jayanta Mukherjee, from Kolkata.
"If it crumbles, it will be a death of another iconic structure. The government should immediately take it over and restore it like Shimla's Town Hall and Gaiety Theatre," he added.
His wife Swastika said developing this place as a nature and wellness park would serve no purpose to attract the tourists, especially for ayurvedic therapies, from Shimla.
The nature park, spread over 9.60 hectares of forest land, was inaugurated in May 2017. The Forest Department has been developing a tulip garden with the plantation of 4,000 red and pink tulips in the park and the ayurveda wellness-cum-interpretation centre.
Octogenarian Ashok Guleria, who has been residing in Mashobra since his childhood, said the dak bungalow in Craignano was the famous haunt for Britons before India's Independence.
Riding on horses, they used to come here to play billiards and read books.
There was a small collection of books and dinnerware in the dak bungalow.
Divisional Forest Officer Amit Sharma, who is in charge of the park, told IANS that since the dak bungalow was in a state of disrepair, the government decided to demolish it.
"All British artefacts, comprising books and cutlery, stationed in the dak bungalow were shifted to a nearby place before its demolition and would now be displayed in the interpretation centre which will come up shortly along with the ayurveda wellness centre here," he said.
The interpretation centre would talk about the grand British legacy and the historical importance of the place, he said.
The permission for constructing the double-storeyed wellness-cum-interpretation centre has been granted by the state Town and Country Planning Department, he added.
Wildlife experts say the area supports rich bird species like the monal, the red jungle fowl, the rufous-breasted accentor, the black lored tit, the jungle owlet, the Alexandrine parakeet, the grey-headed woodpecker and a host of mammals including the leopard.
Craignano is also known for the world's highest water lift located at an altitude of 7,657 feet. It was developed by the British and is still quenching thirst of residents of Shimla and other areas.
Shimla served as the summer capital of British India between 1864 and 1939.
Check out our in-depth Market Coverage, Business News & get real-time Stock Market Updates on CNBC-TV18. Also, Watch our channels CNBC-TV18, CNBC Awaaz and CNBC Bajar Live on-the-go!