Updated : September 13, 2019 06:46 AM IST
CAPA, the airline consulting firm, set the cat among pigeons last week when it said IndiGo overtook Air India by number of seats deployed on international departures.
With thin margins and cyclical nature of business, aviation relies a lot on data to understand, sustain and grow routes.
Is airline capacity a measure of seats or a measure of ASKs (Available Seat Kilometers)? Let’s find out.

CAPA, the airline consulting firm, set the cat among pigeons last week when it said IndiGo overtook Air India by the number of seats deployed on international departures. IndiGo did not show any elation with the finding — it chose to ignore actually — but Air India made no bones about its unhappiness with the information.

Nonetheless, the CAPA finding triggered a raging debate on social media about airline capacity. Is it a measure of seats or a measure of ASKs (Available Seat Kilometers)?

As the dust settles down, let’s look at the finer details and understand what each measure means and where do these airlines stand as of July 2019.

Why is capacity measured in ASK and not seats?

With thin margins and cyclical nature of the business, aviation relies a lot on data to understand, sustain and grow routes. This data analytics requires a common base for calculation.

Imagine two flights, one to Dubai and another to London from New Delhi, being operated by the same type of aircraft with the same number of seats. If one starts calculating the average fare for both the flights by merely dividing the total revenue by the total available seats, the fare will be very high for Delhi–London, yet the flight may not be profitable or makes lesser profits than Delhi–Dubai. 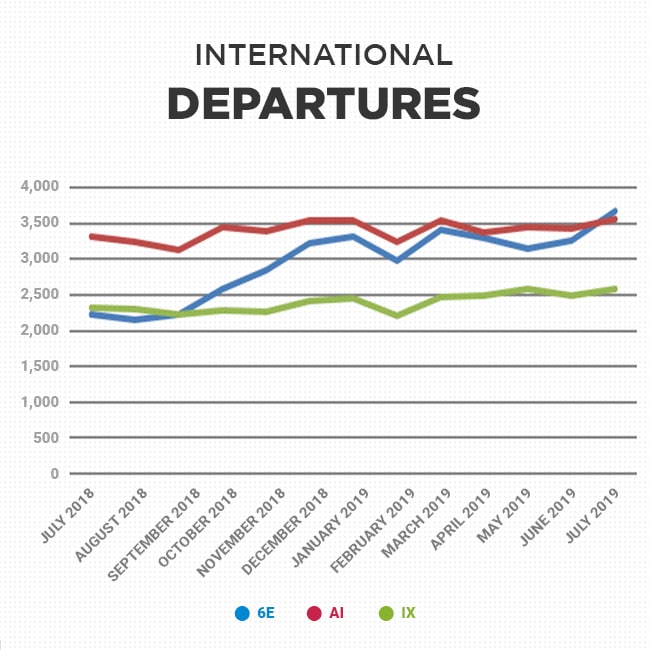 To tide over this problem, the measure used is Available Seat Kilometers (ASK), obtained by multiplying the total number of seats available and total number of kilometres for which the flight flew. A seat kilometre thus refers to one seat, which is available for sale, having flown one kilometre. The measure originated as an equaliser for measurement of performance and is the most accepted measure of capacity world over.

Where does IndiGo stand?

IndiGo, India’s largest domestic carrier by passengers carried and fleet, has been on an expanding spree on the international routes. The airline has been flying to seven international destinations until 2017, from its first international service in 2011.

This pales in comparison to what the airline has announced since the beginning of 2018. The airline has either launched or announced the launch of services to 16 international destinations from January 2018 until now.

July 2019 was the first month when IndiGo reported more international departures (3,680) than Air India. But that’s just the number of departures.

A Network Thoughts analysis based on the data released by DGCA shows that IndiGo had an average of 186 seats per departure. The airline operates the A320 (180 seats), A320neo (186 seats) on most of its international departures with the Istanbul flight being operated by A321neo (222 seats).

Going by the analysis, the airline would have deployed 685,000 seats in July 2019 on international routes. This number is less than 10 percent of total seats by departures for IndiGo, but when translated to capacity by ASK – IndiGo now has 21 percent of its total ASK for July, deployed on International routes.

The number will only keep increasing from here on as more routes that are relatively longer. Examples: Kuwait, Riyadh and Chengdu that come online in the next couple of months.

Where does Air India stand?

Air India clocked 3570 departures in July, with 167 seats on an average per departure. Air India has a whole lot of options for deploying aircraft, from 342 seater B77W which fly to the USA to the B787s with 256 seats, with the 122 seater A319 being the smallest.

The low-cost airline was started with a focus on connecting international sectors, primarily from south India. It has grown across nook and corners of India with operations from Mumbai and New Delhi over the years. However, it has been lagging behind IndiGo’s international services in both departures and passengers flew for almost the entire last 12 months and even in capacity by ASK since January this year.

Tail note:  What do the numbers say? 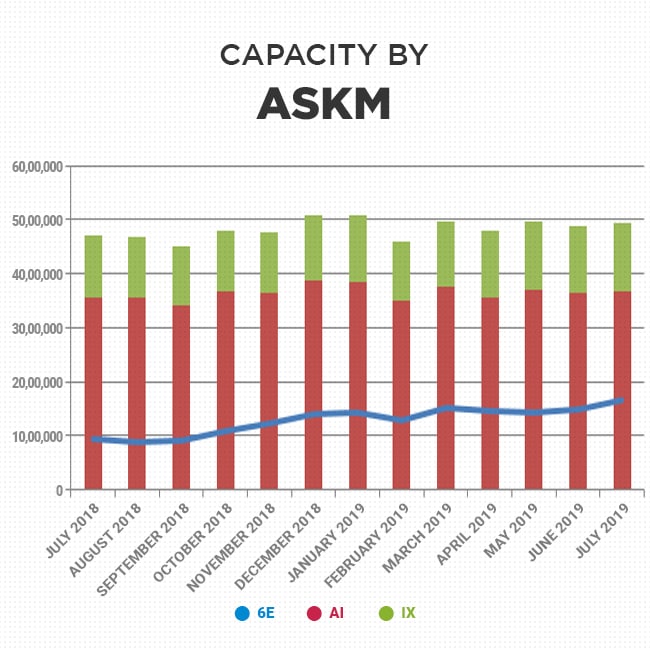 While both Air India and IndiGo are expanding in the next couple of months, going by the data for July, IndiGo will need to close to 150 more international flights per day at its current average stage length and seating to overtake Air India on capacity deployed by ASK. At the same time, Air India will need 18 additional daily flights at the same average seating to overtake IndiGo in terms of seats deployed on international flights. Everyone can keep arguing over measuring capacity in one way or the other, in the end, what will matter is the number of passengers who fly each airline and at 545,117 IndiGo is within a stone’s throw of Air India which flew 598,692 passengers in July. Air India Express flew 403, 628 passengers on international routes. It will be a matter of time before IndiGo surpasses Air India (standalone) by the count of passengers flown. For the national carrier to defend its fort, what will be needed is money – to get all its aircraft operational and start services to new destinations. With impending privatisation, this may not be possible soon!