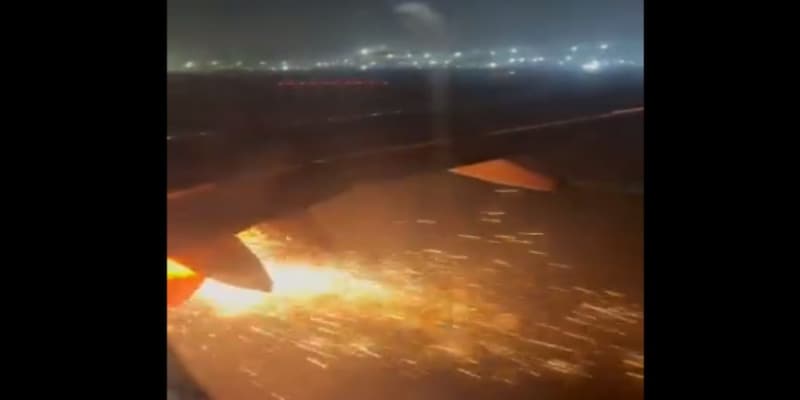 The take-off was aborted and all 184 crew and passengers aboard the plane suffered no injuries.

Passengers aboard IndiGo flight 6E-2131 were in for a shock when one of the engines of the plane caught fire during take-off. While taking off from Delhi’s Indira Gandhi International Airport, the Airbus A320’s engine caught fire just seconds before taking off for Bengaluru.

The take-off was aborted and all 184 crew and passengers aboard the plane suffered no injuries. The incident was captured by one of the passengers on the plane. The video showed that the fire went out within moments, possibly from the use of fire extinguishers present in the engines.

An @IndiGo6E aircraft operating flight 6E2131 from Delhi to Bangalore experienced an engine stall during take-off roll. The take-off was aborted and the aircraft safely returned to the bay. All passengers are being accommodated on an alternate aircraft. Spark 🔥 can seen. #AvGeek pic.twitter.com/xqcbofMo9W

"The flight would have taken off in five to seven seconds. Suddenly, I saw massive sparks coming off the wings, and it turned into a major fire. And the plane was stopped immediately. The pilot informed us there was some malfunction with the engine," Priyanka Kumar told NDTV.
ALSO READ:
IndiGo engine fire incident: Aviation regulator says follow-up action to be taken
The Directorate General of Civil Aviation (DGCA) stated that a preliminary investigation revealed that the fire occurred after some sort of engine malfunction for which the pilot used the engine fire extinguishers. The aircraft has been grounded for further investigation.
“An aircraft operating flight 6E2131 from Delhi to Bangalore experienced an engine stall during the take-off roll. The take-off was aborted, and the aircraft safely returned to the bay,” IndiGo said in a statement.
The incident refreshes conversation around the recent spate of incidents in multiple budget airline flights across the country. Earlier in the year, airlines like SpiceJet, GoFIRST, IndiGo, Air India, Vistara, and Air India Express recorded incidents of engine glitches, windshield cracks, smoke in the cabin, and equipment malfunction among others. The incidents prompted the DCGA to ramp up hiring for flight safety surveillance across the country. The agency would be conducting around 3,700 checks in 2022.
ALSO READ: DGCA to hire 100-150 people over next 6-8 months for enhanced aviation safety surveillance
(Edited by : Sudarsanan Mani)
Check out our in-depth Market Coverage, Business News & get real-time Stock Market Updates on CNBC-TV18. Also, Watch our channels CNBC-TV18, CNBC Awaaz and CNBC Bajar Live on-the-go!