Updated : August 09, 2019 04:08 PM IST
Vistara’s first flight, launched earlier this week, was a celebration of the airline’s ambition to become a dominant player in India’s growing international passenger market.
For the Delhi/Mumbai to Singapore route, Vistara picked a narrow-body aircraft from its fleet.
Vistara has been aggressive with the pricing on the international routes.

Many people have long been wondering about Vistara’s international plans. Conceived as a premium carrier based in India with one of the parents, Singapore Airlines (the other Tata group), the airline had a good start in 2015. The first flight was a perfectly choreographed affair between the flight crew, the ground crew and the guests.

The international plans have been delayed for a year due to red tape, but Vistara is sparing no effort for the launch by announcing four international routes in one month itself, with Delhi/Mumbai to Singapore, Mumbai to Dubai and Delhi to Bangkok. Colombo and Kathmandu are in the works. Vistara’s first flight, launched earlier this week, then was a celebration of the airline’s ambition to become a dominant player in India’s growing international passenger market. The check-in area was dully decked, and there was a small ceremony to announce the launch of international flights.

The Vistara brass was there to celebrate the launch of the first international flight, including CEO, Leslie Thng, who was going to fly on the Delhi-Singapore flight, and COO, Sanjiv Kapoor, who headed straight to Mumbai after to be on the launch flight of Mumbai – Singapore.

At the gate as well, there was a song and dance performance by Vistara employees who chose to participate under the tutelage of Shiamak Dawar. Goodie bags and first flight certificates were given away to everyone on the flight.

Vistara has always tried to match the right equipment with the right route. For the Delhi/Mumbai to Singapore route, it picked the narrow-body aircraft from its fleet. The airline picked the Boeing 737 aircraft for the range it offers. The A320 aircraft on the fleet comes up short on such routes. That means passengers get a two-class experience — business and economy — compared with the three-class experience (premium economy as well) that Vistara usually offers. The airline will upgrade equipment soon as they start getting their new batch of the A320 family aircraft later this year. The Thailand and UAE operations, on the other hand, will get the 3-class experience from day one itself.

On board the flight, the airline unveiled a gourmet experience for business class passengers, and to an extent, for economy passengers as well. For the first flight, we had an exciting menu with four meal choices, and a good wine list plus top-shelf liquor. The Vistara signature cocktail debuted on the international service as well with a cocktail variant, amongst other things.

I enjoyed the dinner. Even in economy, I gather that passengers will receive menus to be able to choose their entrees.

Can’t get sleep on a plane or are with children? Not to worry. The Vistara World experience has made its way to these aircraft as well, and you can access in-flight entertainment, provided you bring your own device and headphones. 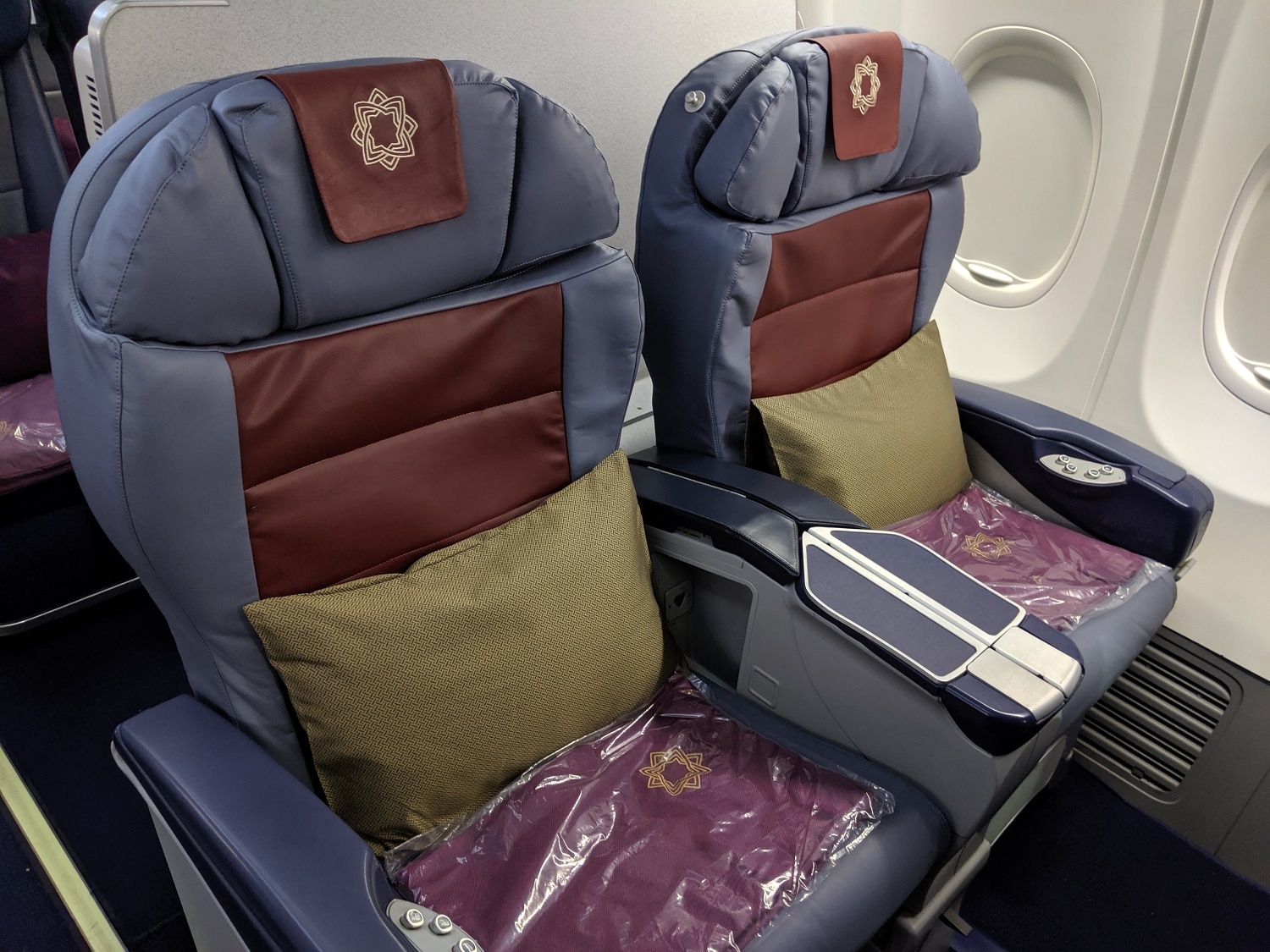 The crew service and hospitality were excellent, delivered with a smile and unobtrusive. The aircraft was nearly full. The airline had a long to-do list, as it happens on inaugural international flights, but the crew held their cool.

There were a lot of senior citizens flying business class, and each of them were cared for genuinely, right down to the crew filling up their landing cards because the passengers couldn’t make sense of some fields. Having said that, the crew were not in your face walking through the cabin every five minutes or so. 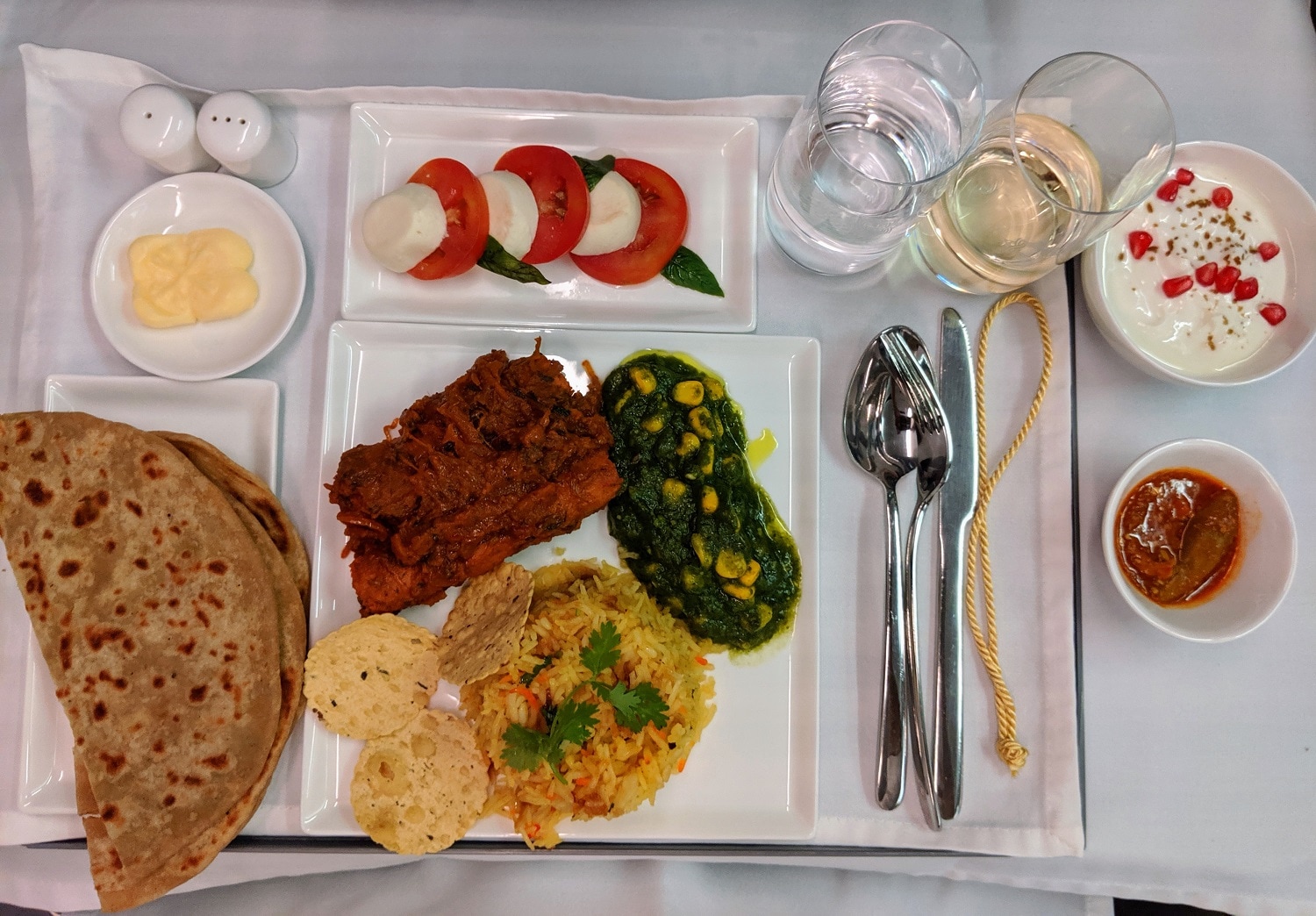 In my personal experience, that service standard would count for a lot as the airline expands on other international routes in the days ahead. There was a frequent napkin service, and passengers did not have to wonder if they had to live with a hot or cold towel because both choices were offered.

For the five-hour flights, Vistara is planning to use single-aisle aircraft for now, which would mean they are going to compete on current and future product upgrades and the passenger experience to compete with Singapore Airlines and Air India on this route. Passengers now have to be content with cradle business-class seats with footrests for now. Vistara has also been aggressive with its pricing. On the same route, Air India is up to 33 percent more expensive on a round-trip basis. Singapore Airlines tickets are 75 percent more costlier. Ergo, I foresee plenty of business travellers moving to this product in the coming days because you arrive in Singapore early and rested for meetings.

Ajay Awtaney is a business travel and aviation journalist based in Mumbai, and the founder of the Indian frequent-traveller website Live From A Lounge (www.livefromalounge.com.) Ajay flies over 200,000 miles every year, and tweets about The Business of Travel at @LiveFromALounge.
Tags Ajay Awtaney aviation Leslie Thng Views Vistara Vistara flights Vistara international flights