This is India’s most punctual airline—for 12 successive months. No, it’s not IndiGo

Updated : September 25, 2019 06:35 AM IST
GoAir now has the record of the longest unhindered stint at the top in the last 60 months, beating Vistara which was leading in On-Time Performance for 11 consecutive months from May 2015 to March 2016.
What makes GoAir’s acheivement exceptional is also that except for these 12 months, the airline has not had a shot at the top in any of the other months for the data, which was analysed for the past five years.
Still, IndiGo has convinced the market so much with its OTP mantra that the average passenger still trusts the airline when it comes to being on-time.

As the Directorate General of Civil Aviation (DGCA) published the monthly summary for August, GoAir claimed the top position for On-Time Performance (OTP). What is the big deal, you may wonder.

What makes GoAir’s achievement exceptional is also that except for these 12 months, the airline has not had a shot at the top in any of the other months for the data, which was analysed for the past five years.

OTP, or punctuality,  charts is measured at the four metro airports. It is a coveted metric and ergo, has always been hotly contested. Market leader IndiGo spent tons of money and lots of efforts to take the concept to the market – which involved full-page advertisements and its first television commercial putting the sole focus on On-Time. But IndiGo – in its 14th year of operations — seems to not have had a dream run at the top in the last couple of years.

In IndiGo’s defence, it must be said it has five times the fleet of GoAir’s 51 planes. While aircraft rotations can be isolated to not touch a particular station, planning rotations, which do not touch any of these four metros where OTP is measured, is an arduous task.

That said, IndiGo has had a similar run at the top when it was a smaller player than its present self. It needs to be seen if Go Air can maintain this when the airline has plans of rapid expansion.

The last one year has seen a lot of upheaval in the Indian skies and at airports. Go Air benefited from having single terminal operations at New Delhi, while rivals Spicejet and IndiGo had their domestic operations split between two terminals. All three of them also operate international flights, which operate from Terminal 3 at New Delhi. Having all its operations at one place helps with swapping aircraft, having a higher ratio of staff to passengers and quickly turning around the aircraft in case of delays or groundings.

The airline also had some spare aircraft in its fleet. While not all the spare ones were in operation (with few being stored at Kannur), the slack in the schedule of existing aircraft and ability to rotate the aircraft due to non-daily international flights helped the airline climb up the charts to lead them for an entire year.

While a lot of flights by various airlines have buffered block times, leading to extended ground times at arrival airport – helping turnaround, this does not seem to be the case with GoAir across the board. An analysis shows that most of its flights from the four metros are within the average block times. 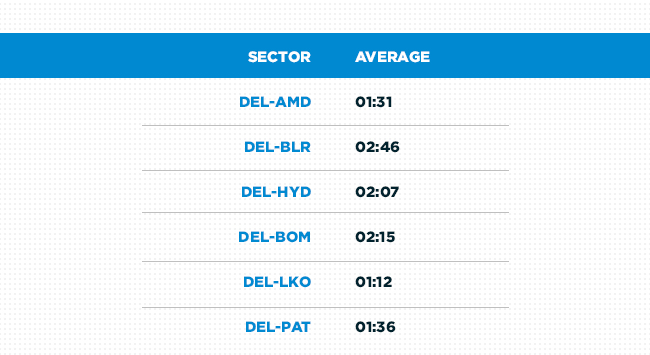 Globally, OTP is measured based on arrivals. In India, it is measured at departure and restricted to departures from four airports only – Delhi, Mumbai, Bengaluru and Hyderabad. The rules also have been vague, at best.

After starting to declare OTP for AirAsia India, the regulator stopped declaring the OTP since it did not fly to all the four airports. The numbers were back when the airline started operations to Mumbai. Likewise, GoAir was not flying to Hyderabad for a very long time, yet had its OTP declared by the regulator.

While the OTP is linked only to four airports, it leads to cases like one in April 2015 when AirAsia India had an OTP of 100%. The airline had just four aircraft back then and flying from a single base – Bengaluru.

A major revamp is needed not just in the measurement of the OTP but also in publishing the details, in a manner that help the travelling public.

IndiGo has convinced the market so much with its OTP mantra that the average passenger still trusts the airline when it comes to being on time. The airline, though, has far outgrown its dependence on OTP to attract passengers. It now relies on its network and at times, lack of other options to attract people.

For GoAir, the airline is exploring opportunities to list on the bourses. A successful listing could catapult the position of the airline and the Wadia group. The airline which has seen umpteen changes in its top management needs to show its operationally sound and strong to take on the competition which IndiGo has presented in the Indian market and OTP is one metric which might cut teeth with the investors.

While the last twelve months may have been bad for IndiGo, the airline has been on top of the charts for 22 of last 60 months, followed by Vistara and Go Air. 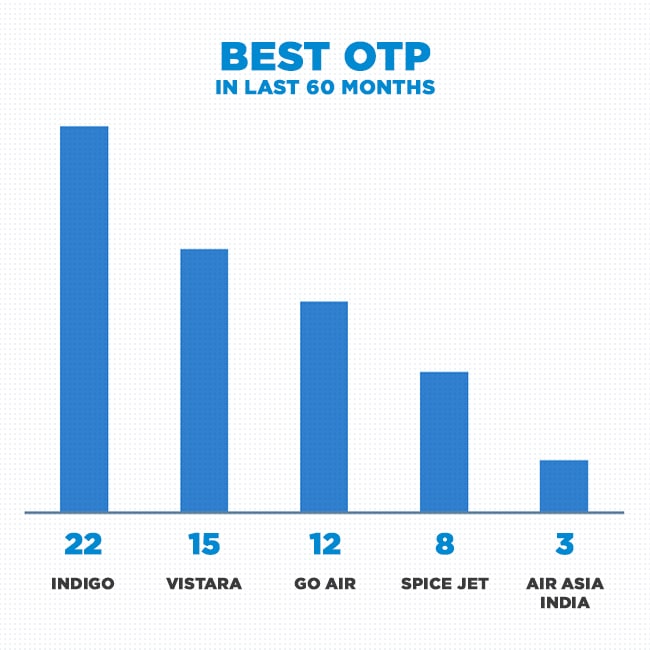 Interestingly, GoAir, which is known for frequent changes at its top management, has been without a fulltime CEO since February.  This happens to be the better part of the period for which it has topped the OTP charts.

While the schedule planning and buffer built-in is just the initial game, achieving this is no miracle and would have needed a concentrated and coordinated effort across multiple teams comprising pilots, cabin crew, airport teams and operations control on a daily level.

Data suggests that what GoAir has achieved in unparalleled in the last five years, but has this helped the airline attract high yielding traffic, the financials are in the wraps since the airline is privately held.

GoAir has almost doubled its fleet in the last one year and has seen the stored planes back in operations. With an increased utilisation, expanding the international network and higher passenger numbers – can Go Air continue topping the OTP charts like how Spicejet has kept leading the load factor metric? The airline has started advertising its achievement and that's when it will attract the attention of competition, who will try and pounce to get a fraction higher than GoAir and claim the top.