These are the most connected foreign destinations from India

Updated : December 18, 2018 12:06 PM IST
A growing number of airlines are flocking to connect other part of India like never before.
India also has a burgeoning middle class, whose incomes are growing in tandem with their aspiration to travel to foreign destinations.
The foreign travel plans of Indians have also been boosted by easier visa norms from countries in ASEAN and the Gulf.

What is common between Kozhikode, Trichy, Thiruvananthapuram, Kochi and Gaya? These five airports have been recording higher international passengers than domestic ones in recent years. These are air traffic outliers, recording a stunning growth of international traffic each year, in a country whose passenger numbers have been growing at more than 20 percent over the past three years.

To be sure, Mumbai and Delhi remain the central international airports of India, but a growing number of airlines are flocking to connect other part of India like never before.

But note that there is significant traffic beyond Mumbai and Delhi. For example, Trichy to Kuala Lumpur has flights 38 a week. Chennai to Colombo sees 56 flights a week. Today the country sees some direct flights unheard of in the past: Vijaywada to Singapore, Nagpur to Doha, Gaya to Bangkok or Vizag to Kuala Lumpur.

Indeed, though air travel predominantly spawned from metro cities in the past, it has increased leaps and bounds from the tier-II cities of the country. This kind of traffic is poised to grow even further, if the government’s plans to provide subsidy for airlines willing to start international routes from unconnected cities go well. There are many explanations for this diverse connectivity. Unlike domestic traffic, where an airline mounts flights when there is demand, international flight routes for most countries are governed by complex bilateral agreements known as Air Services Agreements (ASA). The ASAs dictate the seats on offer between the two countries and could limit the number of cities where airlines can fly to including listing of those cities.

The interesting part is how airlines decide to expand. The ASA between India and Dubai stipulate a capacity of 65,000 seats a week for each side while that with Sharjah is restricted to around weekly 18,000 seats for each side. But the destinations connected from both Dubai and Sharjah stand at 18 each.

Take the case of Jet Airways. The airline recently launched its seventh daily flight between Mumbai and Dubai, choosing to have one strong sector over multiple thin sectors. Air Arabia follows a different tactic. It flies to 13 destinations in India from Sharjah.

Indian ASAs with the South East Asian countries cap the seats to major metros in the country and give unlimited access to 18 destinations like Trichy, Aurangabad, Jaipur and more. That explains why one sees so many frequencies from Singapore even when the seats allotted are less than half of what are allotted to Dubai.

The answer is simple. India is now the fastest growing aviation market in the world, overtaking China. India also has a burgeoning middle class, whose incomes are growing in tandem with their aspiration to travel to foreign destinations.

The government estimates the Indian middle class has 50 million people. That is more than the population of Spain or Canada. Complementing these mammoth numbers are the large Indian diaspora spread across the world. Both these sections have been lodestars for airlines to start flights aggressively to India. The size of the country has led to the spread of these flights.

India has another story. A raft of long-haul flights connects the country to some of the largest Indian settlements abroad. If you fancy being in the plane for long hours, reaching your destination non-stop and having multiple airline meals, you can fly to Vancouver, Toronto, Chicago, San Francisco or New York. All these flights take 15+ hours and are operated by modern aircraft. 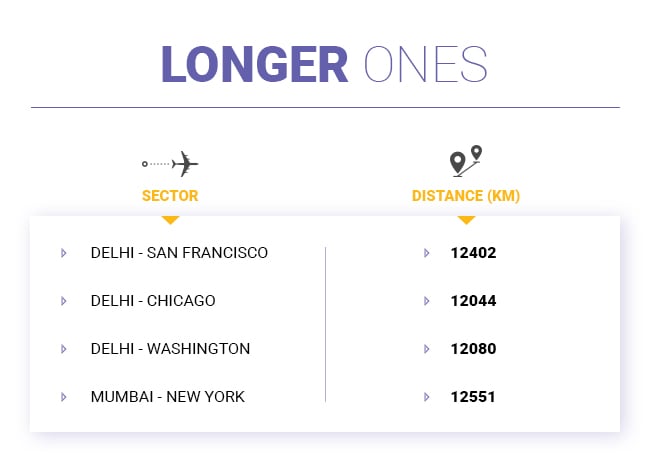 The foreign travel plans of Indians have also been boosted by easier visa norms from countries in ASEAN and the Gulf. No surprise that the most connected destinations from India are also the ones that allow you to get a visa quickly or at times free or on arrival.

There are new entrants to foreign destinations connected to India with every passing day. Ukraine International Airlines started non-stop flights between Delhi and capital of Ukraine, Kiev. The “stans” of Central Asia – Kazakhstan, Uzbekistan, Kyrgyzstan, Turkmenistan and Tajikistan — have their respective airlines fly non-stop to Delhi. Najaf and Basrah in Iraq are connected to Ahmedabad and Mumbai. You can even fly to war-torn Yemen from Mumbai! 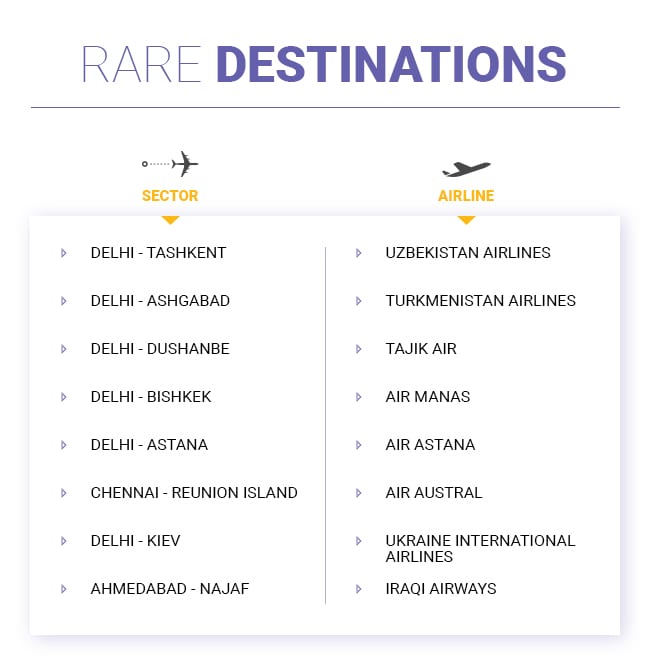 The near ones, rare ones and longer ones. You are finally spoilt for choice in terms of air traffic from India. So where are you off to next?