Updated : February 19, 2019 12:12 PM IST
The RDGs came into effect in 1994, along with liberalisation of air travel in the country.
The intention was to connect the remote and less accessible areas.
IndiGo, the largest domestic carrier in India, flies to Agartala, Badgodra, Dehradun, Dibrugarh, Dimapur, Guwahati, Imphal, Jammu, Jorhat, Port Blair and Srinagar. Vistara a full-service carrier with premium offering flies to Jammu, Srinagar, Port Blair, Bagdogra and Guwahati.

As Jet Airways withdrew from multiple stations across the country, the attention quickly shifted to a flight between Guwahati and Dehradun which the airline had announced. Many times, nonstop flights between two cities are a result of traffic building up on one stop flights. That’s what happened for Bengaluru-Lucknow or Delhi-Kochi. At other times, it is opening of new airports like Shirdi, and the third unique case is where the scheduled airlines have to adhere to the Route Dispersal Guidelines (RDG), which is probably the reason for the start of Guwahati-Dehradun flight.

The RDGs came into effect in 1994, along with liberalisation of air travel in the country. The intention was to connect the remote and less accessible areas and airports in Jammu & Kashmir, the North East along with Bagdogra (Which is in West Bengal), Andaman & Nicobar Islands (Port Blair is the only commercially operational airport) and Lakshadweep islands (Agatti) were part of the group of airports categorised as remote. The RDGs were modified in 2016 when the National Civil Aviation Policy was announced and further amended to include more airports (From Himachal Pradesh and Uttarakhand) and today form a complex mechanism in Indian Aviation Industry.

How are routes categorised?

The government has published a list of 20 routes which form the Category I. Flights connecting stations in North East Region (including Bagdogra), Jammu and Kashmir, Himachal Pradesh, Uttarakhand, Andaman & Nicobar and Lakshadweep form the Category II routes and routes within this area i.e. the flights which originate and terminate amongst these stations are classified as category IIA.

How is the calculation done?

What gets asked many times is - can’t an airline deploy the bigger planes on the metro routes and smaller planes on the non-metro or RDG routes? The answer is No. The capacity is not judged by seats but by ASKM (Available Seat Kilometers). ASKM calculates an airline's passenger carrying capacity by multiplying the seats available by distance flown.

Let’s take some routes for example. The distance between Mumbai and Delhi is 1,135kms and if an airline is flying a 150-seater aircraft between these two cities, the Available Seat Kilometers is 42,56,250. Similarly, the distance between Delhi and Guwahati is 1,457kms and that between Guwahati and Bagdogra is 331kms. For every 25 flights which an airline flies between Delhi and Mumbai, it will have to fly two flights between Delhi and Guwahati and 1 between Guwahati and Bagdogra to satisfy the RDG. Similarly, the airline will require eight flights between Delhi and Bhubaneshwar to satisfy the Category III requirements. These cities are just examples and the airlines have to also look for commercial viability. Theoretically, the longest flight under Category IIA would be from Srinagar to Port Blair – a distance of 3,074 kms, but the airlines would not want to operate such a flight for lack of viability. 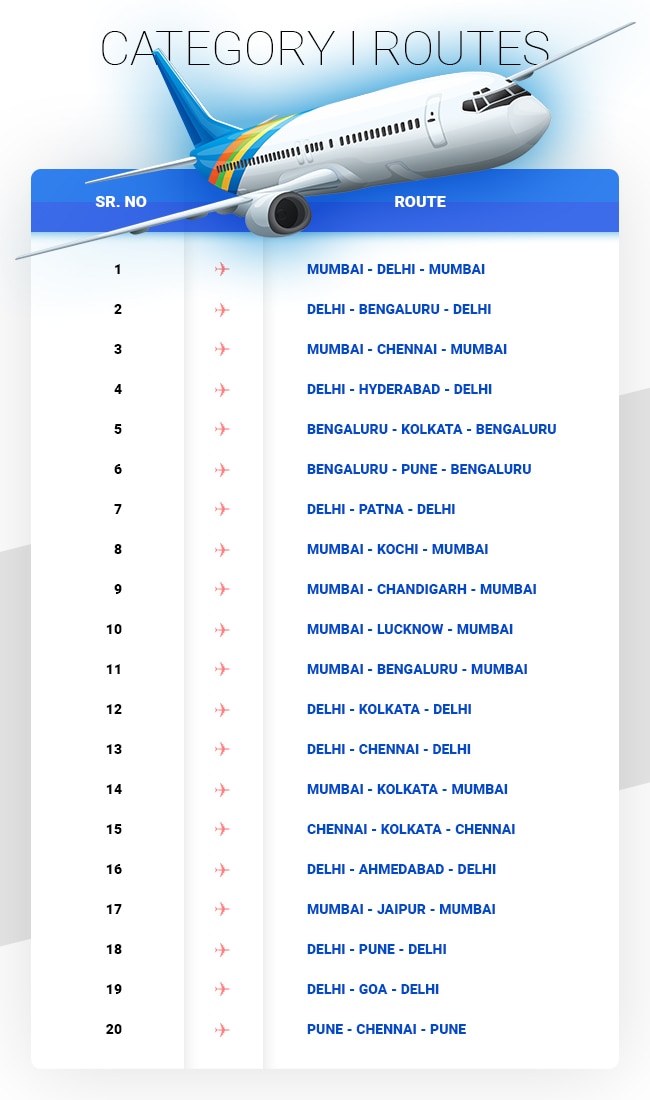 Where are the airlines flying?

Every airline tries to fit in the network and business model with the destinations in areas which serve as Category II airports and help get the required ASKMs. If you do not fly on metro routes, then you are not needed to fulfil the criteria. For the initial period, AirAsia India did not operate between the metro routes and it did not have to fly to the routes which would help it fulfil the Route Dispersal Guidelines. However, the airline did fly to Guwahati soon thereafter and also between Guwahati and Imphal which is a category IIA route.

How big is the impact?

As Jet Airways pulled out from multiple routes in the North East, it once again got to the fore the issue related to the viability of Route Dispersal Guidelines. With the new rules, additional flights are needed to fulfil the guidelines, since the Category I routes have gone up.

Traffic in India is seasonal beyond the metros. Srinagar airfield saw snow and related closure in January and February this year on certain days. This led to airfield closure and cancellation of all flights. While this impacts the RDG for airlines, a bigger issue is the lack of traffic on such routes in certain seasons but the airlines still having to ply on such routes.