Updated : June 18, 2019 01:52 PM IST
The Airbus A321XLR would enable airlines to fly a 9-hour mission and back, and still leave time for a domestic round trip using the same aircraft.
After their initial arrogance, the tone and demeanour of Boeing about the cockpit issues of 737 MAX have changed.

If anyone was expecting a lot from the Paris Airshow this year, they were sure in for a surprise. The airshow, which was predicted to be subdued for many reasons, indeed is. There was a glut of orders that was announced in 2017 and 2018 anyways, and then there is the MAX troubles which is taking the focus away from new planes to safe return into service of existing commitments. But even then, there is a lot more that Airbus is winning at this Airshow.

Airbus launched the A321XLR with 31 orders

The Airbus A321XLR, which was speculated for a while, was finally announced yesterday. Two orders were placed, one from Air Lease Corp and another from Middle East Airlines.

The importance of the A321XLR can't be stressed enough. As the world moves from full-service to low-cost flying, airlines around the world are scrambling to get more bang for the buck from their fleets. The XLR would enable airlines to fly a 9-hour mission and back, and still leave time for a domestic round trip as well using the same aircraft. All that with over 200 passengers in one go. While the A321XLR will give airlines such as IndiGo the range they desire to do non-stop flights between Delhi and London without having to go for wide-body aircraft, the plane is due to be delivered only by 2023. Expecting more orders for this plane type in the coming week ahead. The interesting thing is that it pushes Boeing to do something about the NMA project, and they just can't do it right now.

The A220 gets more widespread

The A220 got 50 firm orders yesterday. The small jet, which is the new focus for Airbus to cover the lower end of the market, over the A318s, is selling like hotcakes, if I may use the term. The 50 orders came from Air Lease Corporation, which means eventually, the aircraft will be placed with many new operators, which is a good thing for Airbus to get its foot in the door with many more operators of this airframe type.

The A330neo is receiving more traction 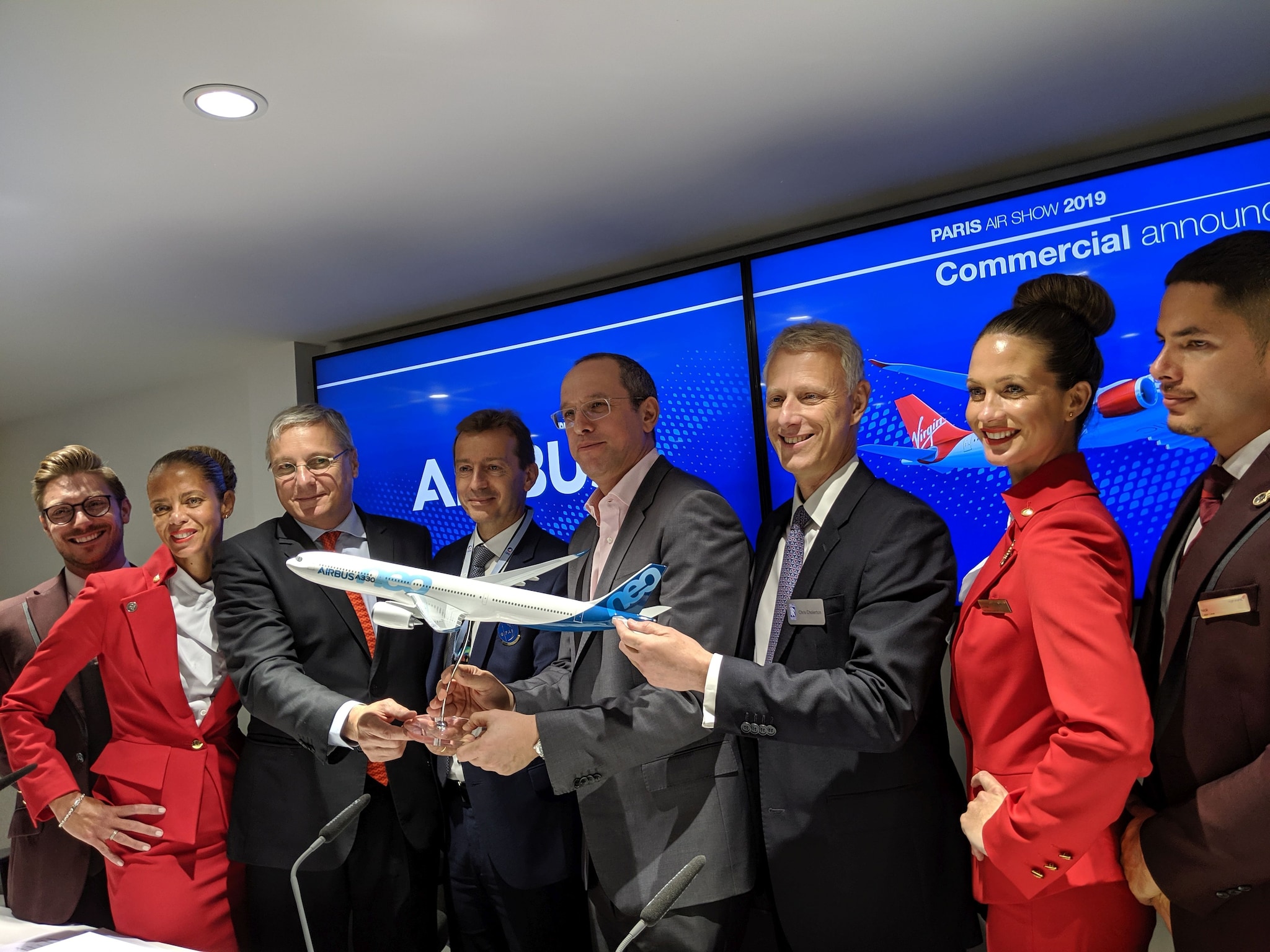 The Airbus A330neo, for which you could have a common cockpit type rating with the A350, won itself a new client in Virgin Atlantic who placed an order for 14 of these, and held on to six options. On the other hand, Airbus is displaying an Air Asia X A330neo which is ready for delivery after the airshow, and it has a 100 of these on order. The aircraft has some great capabilities, and overall, will serve well for customers who want to operate on shorter routes as well as longer routes using the same aircraft given its route economics.

Boeing concedes it made a mistake with the 737 MAX handling

Boeing brought over their CEO, Dennis Muilenburg, over to PAS to concede publicly that they made a mistake with how they handled the whole cockpit issues of the 737 MAX. And they are trying to make it right. The tone and demeanour of the Boeing company have changed after their initial arrogance, and it is a good thing that they are focused on making things right before announcing any new projects. They have a lot on their hand anyways, including getting the 777X and the 737 MAX projects back on track. Boeing is also talking about renaming the MAX family, but no decision has been made on this so far.

IndiGo moves to CFM International engines with a $20 billion order

One of the less discussed newsbyte at Paris was IndiGo's historic order for 600 jet engines from CFM International, switching over from existing supplier Pratt & Whitney. The largest engine order ever, the engines will power 280 Airbus A320neo and A321neo aircraft for IndiGo in the coming years, starting 2020. The LEAP engine has logged nearly five million engine flight hours in less than three years of commercial service.

Mitsubishi drops its hat in the regional jet contest Mitsubishi, which just before the airshow renamed their MRJ programme to SpaceJet, did a media-reveal of the cabin product yesterday. Mitsubishi hopes to have the attention of the US carriers when they start delivering on this product. SpaceJet goes all the way down to the 65-88 seater market with this product.

Stay tuned for more coming up from the Paris Airshow Day 2.