On Time was a wonderful thing. IndiGo’s famed punctuality mantra has gone for a toss since last July

Updated : July 16, 2019 06:50 AM IST
The data released by aviation regulator Directorate General of Civil Aviation (DGCA) shows that IndiGo last led the charts in July 2018.
IndiGo’s OTP has been only better than Air India in three of the last twelve months.
On-Time is no doubt a wonderful thing, but sadly for IndiGo, the competition is also singing the same tune.

As the feud between the promoters of IndiGo became public, the airline’s CEO wrote to the employees to continue focusing on on-time, courteous and hassle-free experience. Since inception, the airline has touted its on-time performance as one of the pillars of its marketing and operational strategy. So much so that in 2009, the airline came up with a TVC focused on being “on time”. The TVC, in which the airline tried to portray that it runs like a well-oiled machine, got plenty of traction. “On-time is a wonderful thing” was the central message of that commercial.

Well, things have changed since then. IndiGo is no longer the airline it was. It is a massive airline now, India’s largest, with a large number of planes, departures and destinations. It has cornered nearly 59 percent of India’s airline industry’s market share.

All this has been possible thanks to a break-neck expansion strategy as it inducted capacity and launches new stations across the country. So how has its famous on-time performance (OTP) fared amid the raft of changes?

Well, OTP hasn’t been the same since last July. 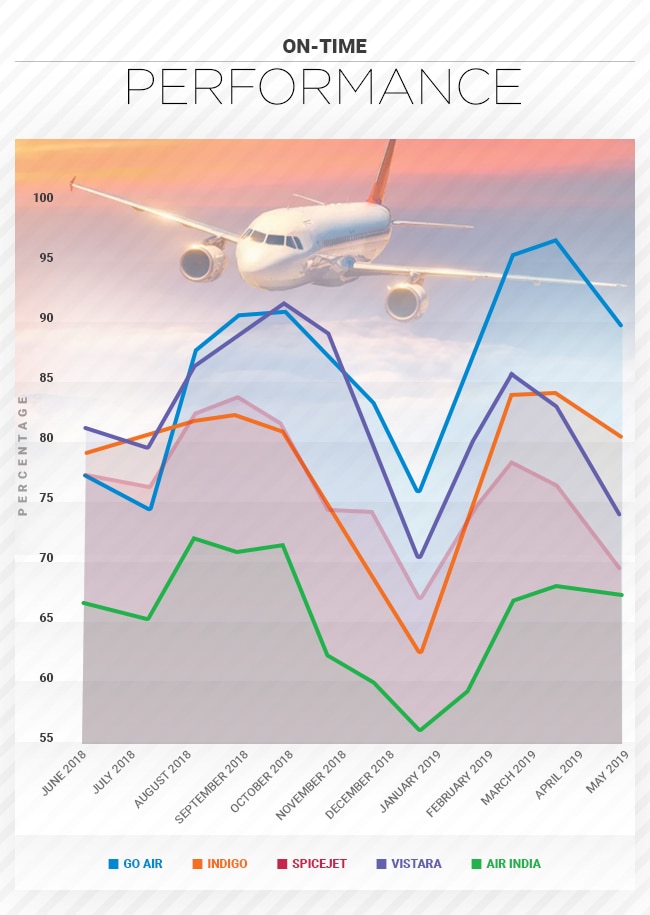 The data released by aviation regulator Directorate General of Civil Aviation  (DGCA) shows that IndiGo last led the charts in July 2018. IndiGo’s OTP has been only better than Air India in three of the last twelve months. Data for July is not yet released. Since AirAsia India data was aggregated and released post-March and Jet Airways is no more in operations, the data for these two has been left out in the analysis.

How is the data measured?

While India has over 90 operational airports, the DGCA releases the data measured at four private airports – Mumbai, Delhi, Bengaluru and Hyderabad — to arrive at an average before releasing it to the public. The flip side of the data is that flights which neither originate nor terminate at any of these four airports are not measured and since the data is based on departure, the arrival OTP is not published.

Based on presence at these four airports, airlines see a huge variance in the number of flights which are tracked but gets balanced considering the scale of operations of each airline and the percentage of flights which touch the four metros.

As operations grow, so do the complexities. OTP with 10 planes and 20 destinations is certainly easier to manage than IndiGo’s 236 planes, 73 destinations in total and roughly 40,000 departures a month.

But the trick for IndiGo has long been to manage and maintain the balance growth and operations. Is it the break-neck growth that it desires? Or operational excellence? Improvement in operations and growth ambitions by competitors, especially SpiceJet, have meant that IndiGo can longer take its numero uno position for granted.

In recent years, IndiGo has effected several changes in top management and induction of expats at key positions. While this was to get the expertise of people who have experience of handling large operations, unlike the previous team which built the airline from grounds-up, it has unfortunately coincided with the shortage of pilots and drop in position on on-time performance charts, both of which are under the direct control of the airline operations team.

The “On-Time is a wonderful thing” advertisement ends on a nationalistic mode – “When we get our work done on time, we become the world’s most powerful economy “on-time”. The promise of an on-time landing continued in its next advertisement in 2011, when the airline launched a broad-way style musical at the time of starting international flights.

Back then, the airline was yet to climb the ladders of success and was growing one step at a time. Things have changed today. Two competitors are out of business and IndiGo is the domestic market leader with sight set firmly on international skies.

On-time is no doubt a wonderful thing. But sadly for IndiGo, the competition is also singing the same tune.