Nepal plane crash: A look at 9 fatal air accidents in the country since 2010

Nepal plane crash: A look at 9 fatal air accidents in the country since 2010 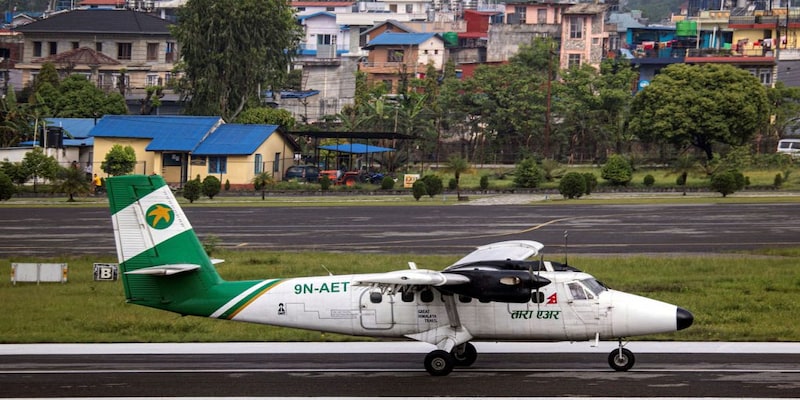 The crash site of Tara Air-operated aircraft, which went missing on Sunday with 22 people onboard, including four Indians from Thane, has been “physically located” by the Nepal army

The Nepal army has located the crash site of the Tara Air-operated aircraft which went missing on Sunday with 22 people onboard, including four Indians.

The crash site is believed to be located in Sanosware, Thasang-2 in Mustang district, Nepal Army spokesperson Brigadier General Narayan Silwal tweeted on Monday and posted a photo of the wreckage.
There is no information on the passengers yet, news agency PTI reported.
The Canadian-built turboprop Twin Otter 9N-AET plane lost contact minutes after taking off from the tourist city of Pokhara around 10 am on Sunday. The plane was flying to Jomsom.
Apart from the four Indian nationals from Thane, there were two Germans and 13 Nepali passengers along with three-member Nepali crew on board the crashed Tara Air flight.
This is the third crash of a Tara Air-operated aircraft in 13 years. Although a famous tourist destination, Nepal’s aviation industry is plagued by poor safety standards resulting in several crashes since 1949, when Nepal witnessed its first plane landing.
Here’s a look at the major plane crashes since 2010:
Air Dynasty helicopter crash (2019):
Seven passengers, including Nepal’s tourism minister and civil aviation minister Rabindra Adhikari and Tara Air-owner Ang Chhiring Sherpa, were killed when a helicopter operated by Air Dynasty crashed into a hill on its way to Kathmandu. Apart from Tara Air, Sherpa owned Yeti Air and Himalayan Airlines in partnership with Tibet Air. The crash occurred due to poor visibility. A report by Kathmandu Post later said there was ‘undue pressure’ on the pilot to fly VIP passengers in poor weather conditions.
ALSO READ: 14 bodies recovered from wreckage of Tara Airlines plane in Nepal
US-Bangla Airlines Flight 211 (2018): On March 12, 2018, the 76-seat US-Bangla Airlines Bombardier Q400 aircraft, travelling from Dhaka to Kathmandu, crashed while landing at Tribhuvan International Airport. Of the 71 people onboard, 51 died. The crash occurred due to the “pilot’s error and loss of situational awareness", officials said.
Tara Air Flight 193 (2016):  Tara Air Flight 193, travelling from Pokhara to Jomsom, crashed near Dana village. The plane, carrying 23 people, went missing on February 24, 2016, eight minutes after take-off. No one survived the crash.
Sita Air Flight 601 (2012): A domestic passenger flight by Sita Air crashed while making an emergency landing at Kathmandu on September 28, 2012. All 19 people onboard were killed in the crash. The plane, which was going to Tenzing-Hillary Airport from Kathmandu, was trying to make an emergency landing due to some technical issues.
Agni Air Dornier 228 crash (2012): The Dornier 228 aircraft of Agni Air crashed near Jomsom Airport. The plane was flying from Pokhara with 21 people onboard. Of the 21, 15 passengers lost their lives, including the pilots.
Buddha Air Flight 103 crash (2011): Twenty-two people onboard a Beechcraft 1900D aircraft of Buddha Air were killed when the plane crashed near Lalitpur on September 25, 2011. Ten Indian nationals were among those killed in the crash.
Tara Air Twin Otter crash (2010): A DHC-6 Twin Otter aircraft of Tara Air crashed on December 15, 2010, while flying from Lamidanda to Kathmandu, killing 22 people onboard.
Agni Air Flight 101 crash (2010): An Agni Air Flight 101, flying from Kathmandu and Lukla, went missing after take-off and was later found to have crashed, killing all 14 passengers onboard.
ALSO READ: Nepal plane carrying 22 people including four Indians goes missing; bad weather hinders search operation
(Edited by : Sudarsanan Mani)
Check out our in-depth Market Coverage, Business News & get real-time Stock Market Updates on CNBC-TV18. Also, Watch our channels CNBC-TV18, CNBC Awaaz and CNBC Bajar Live on-the-go!