Naresh Goyal, wife Anita Goyal to step down from Jet Airways board

Updated : March 25, 2019 07:42 PM IST
Etihad holds 24 percent stake in Jet Airways and was widely expected to be a major helping hand for the beleaguered airline while Goyal holds 51 percent stake in the airline.
Jet Airways has more than Rs 8,000 crore in debt and is looking for urgent liquidity infusion to pay its pilots, engineers and make payments to its lessors.

Jet Airways chairman Naresh Goyal and his wife Anita Goyal will step down from the board of the debt-laden airline, he founded nearly two and a half decades ago.

Other than the Goyals, one nominee of Etihad Airways will also resign from the board, the company said in an exchange filing. Goyal would also cease to be the chairman, it said.

The decision was taken at the airline's board meeting held on Monday.

Abu Dhabi-based Etihad is a strategic partner with 24 percent stake in Jet Airways. However, SBI chairman Rajnish Kumar said after the completion of the deal Etihad will own 12 percent and Goyal will have a stake of 25 percent in the airline. 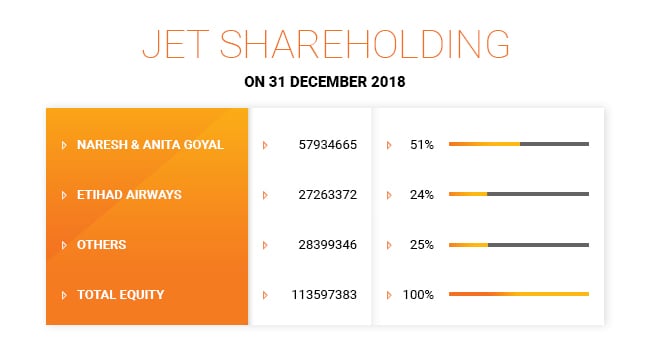 Jet Airways said the lenders will infuse up to Rs 1,500 crore in the airline by way of issue of appropriate debt instrument against the security of its assets which will restore normalcy to the company.

"Lenders are getting 51 percent stake, which itself is worth over Rs 1,500 crore," said Kumar.

The Rs 1,500 crore interim priority funding will be used to pay lessors, vendors and delayed salaries of the employees of the company.

The lenders will sell equity by the first quarter of the financial year 2020 and convert the debt to equity of Re 1 and issue 11.4 crore shares, it added.

The company also said they will constitute an interim management committee that will manage and monitor the daily operations and cash-flow of the airline. The lenders will initiate a bidding process to find new investors by June quarter.

According to the lenders, the interim management committee will have five members and it will directly report to the board. Of the five members, two will be bankers, a senior Jet Airways management person and one each from McKinsey and Alvarez & Marsel.

Goyal, after stepping down from the board, said that no sacrifice is too big for him to safeguard the interest of Jet Airways.

"For the sake of my family of 22,000 employees and their respective families, I have today taken the step of stepping down from the board of Jet Airways. I became the Chairman on 1st April, 1992 and my family is behind me and with me in this decision and I hope you will support my decision too. I will miss you one and all. Thank you for your brilliant dedication and loyalty down the years” Goyal added.

Jet Airways, which has been operating for more than 25 years, is looking to restructure its debt, estimated to be more than Rs 8,000 crore, as well as raise fresh funds.

The airline has suspended operations on at least 14 international routes till end-April and over 80 planes are on the ground. As many as 54 aircraft have been grounded due to non-payment of lease rentals.

Kumar had last week said that the lenders would make every effort to keep Jet Airways flying and that all stakeholders were in the unanimous view that the airline is a good aviation property.