Updated : September 18, 2019 08:54 PM IST
The Mumbai airport faced a severe capacity crunch after the grounding of Jet Airways.
The return to normalcy is an impact of airlines deploying more seats per departure than what Jet Airways did.

Remember the capacity crunch in Mumbai after the grounding of Jet Airways? Turns out that the Mumbai airport now has more seats on offer on domestic routes than it had when Jet operated its complete schedule. This is despite the fact that the airport has not given away all the slots of Jet Airways – be it domestic or international.

There is no surprise then that last week, the government held talks with airlines on sustainability. Airline pricing is a function of capacity in the market and demand. And while there were fears of higher fares immediately post suspension of Jet Airways in April, the government-led mechanism with airports to give away slots for temporary period has not only matched the gap, but now exceeded the seats deployed. By June, the difference was down to only 11 departures a day and while there continues to be a slight lag in departures now versus when Jet Airways operated, the interesting turn of events have led to higher seats in the market.

How did this happen?

The slots of Jet Airways were divided amongst incumbent airlines. However, the slots were linked to induction of capacity and airlines weren’t allowed to pull out of existing sectors and deploy the capacity to these newly acquired slots at Mumbai. In a scramble to add capacity, SpiceJet became the biggest beneficiary of the slots as it inducted aircraft which earlier flew for Jet Airways and also recruited B737 pilots. While the pilots and crew were absorbed across airlines, the A320 operators will take time to operationalise the pilots and crew as they undergo type rating and training. Vistara followed SpiceJet in inducting the B737s and adding capacity at Mumbai.

SpiceJet started deploying the aircraft previously operated by Jet on the additional slots which were on offer. Vistara re-deployed its A320s for the initial additional flights, but followed it up by inducting B737s operated by Jet. These aircraft were configured in 168 seats and with little time at hand, the airlines deployed in the same configuration and most of the times without even a full change in livery.

However, IndiGo, GoAir and AirAsia India did not opt for another aircraft type and instead added flights by inducting additional A320 family aircraft or operationalising some or all of its grounded fleet. These aircraft were either 180 or 186 seats, which is 7 percent more seats per departure.

So while SpiceJet and Vistara outnumbered the others in the number of slots, IndiGo, GoAir and AirAsia India had more seats per slot than the other two – due to the aircraft configuration of their aircraft.

This has resulted in an overall impact of 2 percent increase in seats at Mumbai on domestic departures.

What do the numbers say?

Data shared by OAG — an air travel intelligence company — shows that Mumbai has 17,96,572 domestic seats on offer for October 2019. This is “ From our experience, such a rapid recovery in total capacity is almost unprecedented in such a short period of time; it would normally take around a year for a full recovery to occur” said Mayur Patel, Head of JAPAC for OAG.

An analysis by Network Thoughts, based on the OAG data, shows that Vistara has nearly tripled its seats at Mumbai while Spicejet would operate 2.5 times the seats it did last October.

Jet Airways group had 5, 53,408 seats on domestic routes from Mumbai in October 2018. A bulk of these are now operated by Spicejet which got 2, 20, 197 additional ones, followed by IndiGo and Vistara. 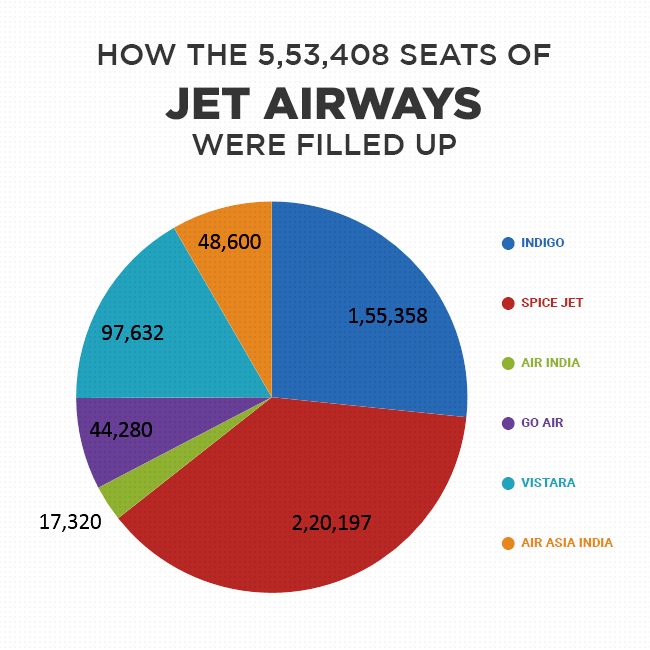 With the re-distribution done, IndiGo deploys 39% of all seats at Mumbai, with Spicejet coming in next at 21 percent. If Mumbai, the biggest business market in the country and the second largest airport in the country is an indicator – 75.2 percent of all domestic capacity is operated by low-cost carriers. 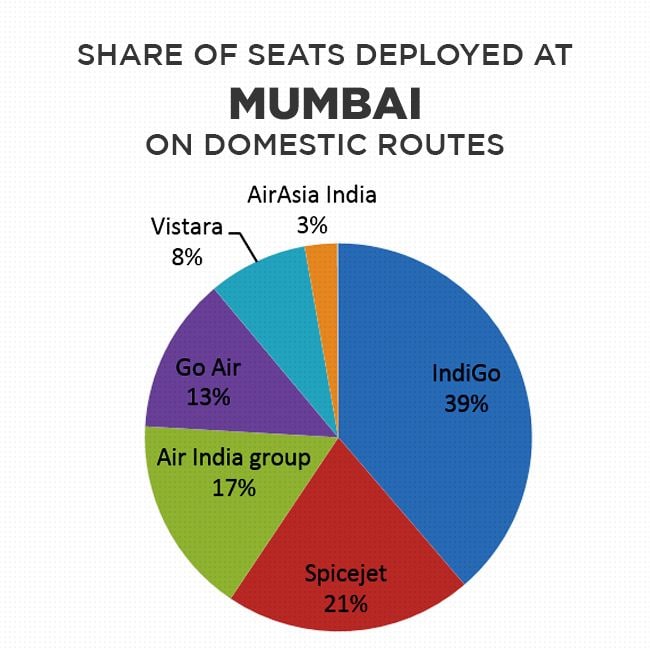 Capacity can be measured in ASK or seats deployed but while for international routes, the capacity by ASK significantly changes due to the stage length, for domestic the route networks of airlines have seen fairly average stage lengths across airlines and the impact is minimal.

For an airport which is congested, had not given out slots to airlines for long and has little hope for expansion, this has come as a surprise. This also took away the possible impact on fares due to scarcity and instead has led to further pressures on airline yields in the weaker second quarter of the financial year.