Let’s face it — unless govt breathes life into UDAN urgently, it will die

Let’s face it — unless govt breathes life into UDAN urgently, it will die

With a dismal performance of 24.7 percent routes being in operation, the government has little choice but to look at why the performance is so poor and how to get it back on track, writes Ameya Joshi.

The Regional Connectivity Scheme (RCS) was first mentioned in the National Civil Aviation Policy (NCAP) in 2016. Subsequently it went through some iteration before being launched in October 2016. The scheme has the best intentions in mind with the thought of Hawai Chappal in Hawai Jahaj predominantly aiming at subsidised travel from Tier-II and Tier-III cities helping grow trade, boost air traffic and connect cities to towns.
First jolt
The first round of RCS-UDAN saw bids from Air Odisha and Air Deccan – both of which were bidding without aircraft in fleet. While both of them couldn’t sustain the operations for more than one reason, Zoom Air lost the plot mid-way. That left Alliance Air – the regional arm of Air India, Spicejet and to a small extent Trujet – the Hyderabad-based regional carrier to take the UDAN scheme to success. However, a large percentage of routes were won by Air Odisha and Air Deccan which led to the success percentage being on the lower side.
While the scheme couldn’t come out of the first jolt, there was some hope when IndiGo placed an order for the ATR – turboprop aircraft and participated in the subsequent rounds of UDAN.
Scheme changes
The original idea of the scheme was to connect the underserved and unserved airports. The government had declared a long list of airports which it intended to operationalise in due course of time and these airports were open for bidding. Airlines were free to ask for subsidy – which has a maximum cap depending on the number of seats the airline intended to deploy on a route and the airline asking the least subsidy (in some cases, nil) would win the rights to ply that rule. When an airline won the route, it had a monopoly on that route.
By the time the next rounds of UDAN were being bid, rules had changed. More than one airline could bid for a route and if both did not want subsidy, both could win the route! Spicejet and IndiGo battled it out on Chennai-Hubli route, after which Spicejet threw in the towel and withdrew from the route. Recently, Spicejet withdrew its operations from Hubli completely.
From underserved and unserved, the scheme also became route-centric! Instead of airports, now routes were available for bidding. For example, routes like Hubli-Ahmedabad or Hubli-Goa were bid and won by airlines. One wonders why the government subsidy be doled out to fly between Hubli and Goa, a distance of 150 km by road and less than an hour by flight! Similarly for routes like Hubli-Chennai, which can be offered one-stop by airlines via Bengaluru! 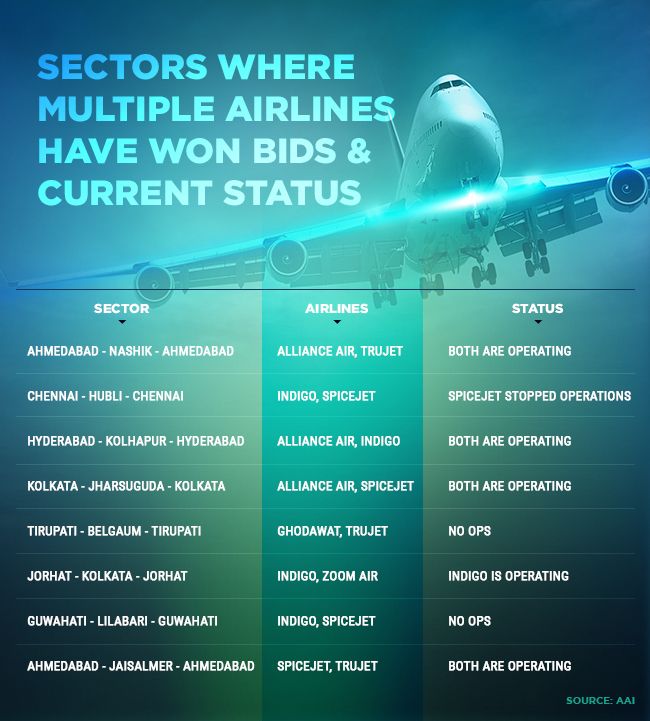 Wouldn’t it make more sense to offer these subsidies to hitherto unconnected airports like those in the northeast or in other parts of the country than to select an airport and connect it to multiple places by doling out subsidy, to an extent that bigger city have lesser connectivity than those under UDAN!
Getting it back on track?
Is the intention good? It definitely is! Has the scheme lost its way? It has! Does it need a course correction? It does!
The government has stopped accepting bids for new routes after UDAN 3.1 bidding was done. While it stopped allotting routes on domestic circuit, the scheme has now gone international! To ensure that airlines do not stop operations on routes like Spicejet did on Chennai-Hubli or a significant portion of money under UDAN is not spent in connecting two cities which are not remote, have sufficient connectivity on its own and the routes can be part of commercial planning for airlines – it is important to get back to basics and see how can there be a push to operationalise more and more airports and connect them to the nearest metro as was envisioned in the early days of UDAN.
With Jet Airways out of action – there is some availability of slots at major metro airports which could be used to cater to UDAN flights. The civil enclave at Hindon will soon see flight operations and could cater to additional flights in the northern region.
UDAN has its success stories – Salem, Kishangarh, Bikaner and many more have seen flight connectivity for the first time or after many years due to RCS-UDAN. The scheme needs more of such airports to be a success rather than have one airport and multiple flights from there which probably is a case of subsidy going in wrong direction.
With a dismal performance of 24.7 percent routes being in operation, the government has little choice but to look at why the performance is so poor and how to get it back on track.
Ameya Joshi is the founder of aviation analysis blog NetworkThoughts.
Read Ameya Joshi's columns here
Check out our in-depth Market Coverage, Business News & get real-time Stock Market Updates on CNBC-TV18. Also, Watch our channels CNBC-TV18, CNBC Awaaz and CNBC Bajar Live on-the-go!