Updated : May 29, 2019 01:04 PM IST
The collapse of Jet Airways has often been partially blamed on too much capacity being dumped in the Indian market.
The strategy of stimulate the marketing and attracting passengers by selling seats at low fares is not sustainable for airlines.
• Capacity is rising leaps and bounds again and by June, the trajectory will again be upwards, putting pressure on airline yields.

From hyper growth to negative growth, the last eight months have been a rollercoaster for Indian aviation. Capacity induction, led by IndiGo, had fuelled a 20 percent growth in passenger numbers, commensurate with the Available Seat Kilometers (ASK) growth each month. Buoyed by cheaper fares, airline after airline pushed for greater occupancy. 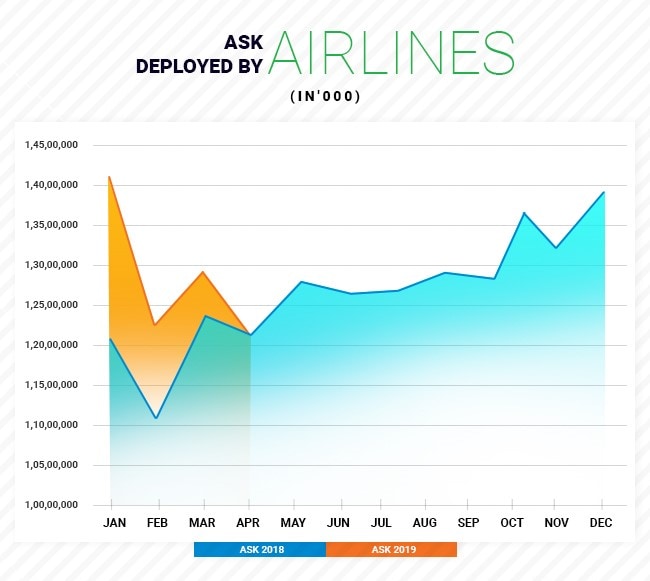 The collapse of Jet Airways has often been partially blamed on too much capacity being dumped in the Indian market. It has become a vicious cycle where quick induction of aircraft leads to over capacity in the market. This capacity has to be filled and to stimulate the market and attract passengers, airlines at times sell seats at low fares. While this generates demand and helps fill up the planes and increase load factors, seldom are such mechanisms profitable in the long run.

The double whammy of Jet Airways operating bare minimum flights in April leading up to its eventual suspension on April 17 and the grounding of B737 MAX8 of Spicejet a few weeks before that created a capacity crunch. Capacity deployed by airlines in March was 8 percent lower than January and the gap widened to 10 percent in April, show data released by Directorate General of Civil Aviation (DGCA). There was a sudden drop in capacity for 50 days spanning March, April and May.

Against this backdrop, the fares increased and passengers stayed away leading to a drop in passenger numbers. However, by the end of April, Spicejet had started inductions of aircraft that previously belonged to Jet Airways and Vistara increased utilisation. IndiGo had recruited pilots to get over its own internal issues and the industry was back on its way to recovery in terms of capacity.

However, it is this very recovery that could create trouble for airlines in the future as the market inches closer to over capacity once more. Vistara has stated that it would operate six additional aircraft soon – a mix of 4 B737s from erstwhile Jet Airways and 2 A320neo. That will be a growth of 27 percent to its current fleet of 22 aircraft.

On May 28, 2019, Spicejet confirmed that it had added 25 aircraft to its fleet in April and May and would add 35 more until March 2020. A day prior, IndiGo said in its analyst call that the airline is looking to add 64 aircraft until March 2020, though not all of them will be net additions because a few existing planes are scheduled for re-delivery.

These numbers have not gone unnoticed by the managements. Rononjoy Dutta, chief executive officer of IndiGo, spoke about capacity during the analyst call on 27th May. He stated that the positive impact on yields due to the Jet Airways crisis was restricted to March and April. “By May, the industry has added capacity to Jet Airways and the Jet Airways effect has started to dissipate,” he said. Dutta added that by June he thinks that the effect will disappear in the domestic segment.

How will the scenarios play out? If Jet Airways is resurrected and returns in a much leaner operation with lesser planes, along with deliveries of the B737 MAX8 for Spicejet and a longer closure of Pakistani airspace, it may trouble IndiGo’s international plans and push them to deploy the higher capacity A321neos in domestic skies. Or say, Jet Airways does not fly again, then Spicejet and IndiGo would battle it out for the domestic slots which are available. 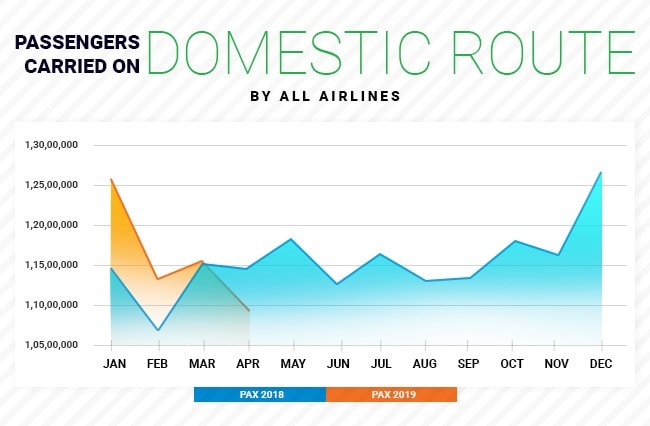 Either way, capacity is rising leaps and bounds again and by June the trajectory will again be upwards putting pressure on yields and possibly a need to drop fares to attract passengers because the increase in capacity will coincide with weaker quarter and monsoon season. This is bound to put pressure on balance sheets of airlines and when even IndiGo can have red ink on its balance sheet in the past year, one can only imagine how much this would hurt the others that have significantly higher cost of operations than IndiGo.

As the Modi led government takes oath this week, the last thing that the government would want is another airline going down. While “Hawai Chappal in Hawai Jahaj”, 20 percent growth in domestic air traffic, one of the fastest growing markets in the world and 100 operational airports have been catchy taglines, the first six months after assuming office had seen Spicejet face a near-death experience and the last six months saw the collapse of Jet Airways.

With the “too big to fail” rhetoric for Jet Airways not having worked, no matter how many policy reforms are initiated, what will matter in the end is pricing discipline. Sadly, that has been lacking from the market. With the onus on capacity driven growth, a spike in fares leads to drop in passengers and that’s when the risk of overcapacity raises its heads again.