How the slots in Mumbai have given Spicejet an unprecendeted boost

Updated : May 27, 2019 06:53 PM IST
Growing too fast too soon could be dangerous for any airline and Spicejet has a sizable amount of debt.
When the B737MAX8 starts coming in, the airline will be saddled with additional capacity in a short interval.

Even before Jet airways suspended operations on April 17, a few airlines had got additional slots, temporary in nature, to start flights out of Mumbai. The ad-hoc arrangement to rein in high fares with the peak season just around the corner saw Vistara announce the first set of flights and everyone followed. The rules were soon changed with additional slots were linked to additional capacity being inducted and not re-deployed from existing routes.

The massive shortfall of capacity in Mumbai and sudden availability of slots led to Spicejet inducting ex-Jet Airways aircraft in quick succession, along with the crew which was available to fly the B737 series aircraft almost immediately, unlike competition where the mainstay is the Airbus A320 and the crew requires conversion training and type rating on the new type. This has given a boost to Spicejet like no other. Post its near death experience in 2014, the airline had been sustaining on finding routes with little competition to survive and have higher yields. The strategy, while largely successful, did not stand ground at all times when IndiGo upped its ante and led to Spicejet vacating markets.

Two things changed since the fall of Jet Airways. The first was the ready availability of additional traffic, especially business travellers who flew Jet Airways.  If Spicejet had to tap into this, it needed presence on metro routes, and over the last few years, it had kept its presence on metro routes from Mumbai to the minimal. The second was availability of slots. Spicejet has not been able to get back the slots which it had to let go during its own crisis. Sample this; the airline operated 940 departures from Mumbai in January 2019, still about two flights a day less than what it operated before the beginning of its crisis in 2014. 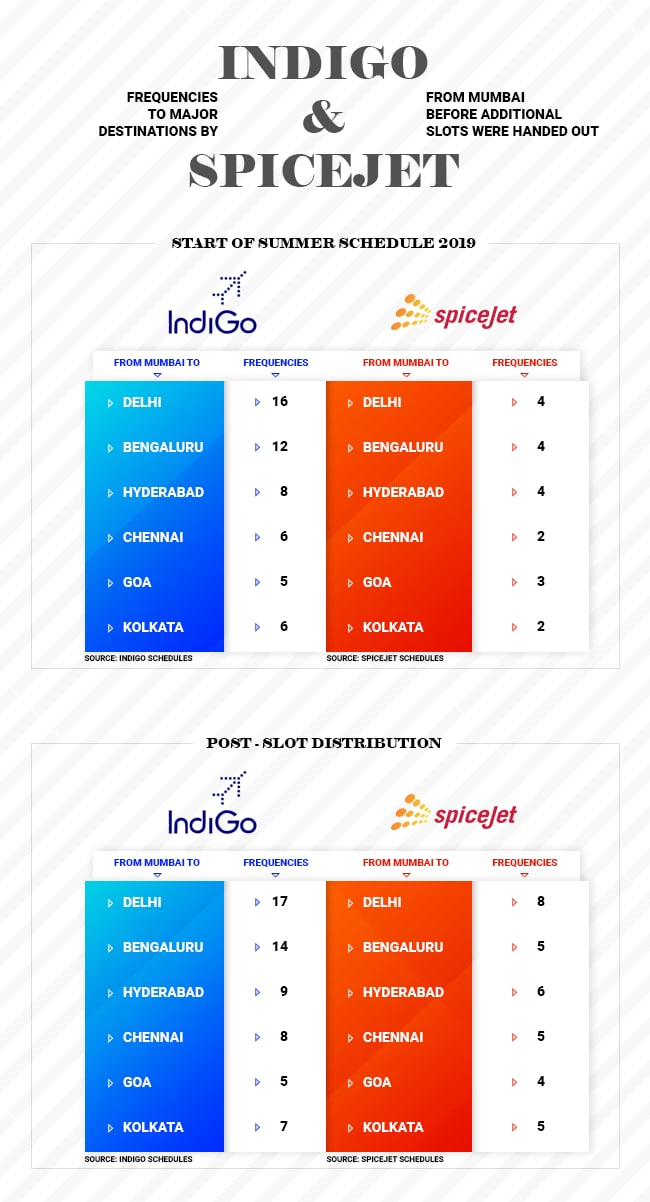 With availability of slots and the air traffic almost on the platter, it was time to regain foothold in the market, and not only the markets in which it hold sway once upon a time but also those where it now wants to make inroads. The favourable rules, ready availability of aircraft, cockpit and cabin crew -- there was no better time to grow and take on IndiGo – albeit partially.

IndiGo flew to 21 destinations from Mumbai as compared to 15 of Spicejet when the summer schedule began in 2014. Spicejet, not comparable to IndiGo in fleet size, flew three frequencies to Goa, same as IndiGo. On routes to Chennai and Kolkata, Spicejet operated three as compared to five of IndiGo.

Then came the slots! Slots which helped Spicejet up the ante and not only take on IndiGo but have a sizable capacity and frequency share in the market. Spicejet, in the last two months, has seen the frequency go up drastically. The airline will have 8 frequencies to Delhi in June and five each to Chennai and Hyderabad – an increase of three each. Indeed this does not compare well with IndiGo which is way above the mark of Spicejet, but Spicejet is now within striking distance!

How does it help?

The strategy of higher frequencies helps in two ways. Firstly, the corporate traveller who is looking to juggle flights can be snatched away. Hitherto fliers who stayed away from the airline for lack of frequencies can now be approached and signed up to ensure that they travel with Spicejet. Corporate deals have contributed a large amount of sustained revenue for airlines all across the world.

Secondly, a higher frequency share, which translates into a higher capacity share, also helps improve pricing. An airline as big as IndiGo would be willing to chase a rival when there is duopoly. However, on routes where there is oligopoly or presence of all players, competing by dropping prices may not always work. While that is a good weapon against competition in duopoly routes, when you have a sizable frequency and capacity share, you also have some say in the pricing.

Growing too fast too soon could be dangerous for any airline and Spicejet has a sizable amount of debt. While the market presented opportunity, the margins were as thin as a boarding pass all along so the renewed opportunity doesn’t translate into ready profitability. If at all it translates into something, then it is higher cash burn. No organisation is ready to grow 30 percent to 40 percent overnight and the manpower which has come in along with the planes will have to be handled with care.

When the B737MAX8 starts coming in, the airline will be saddled with additional capacity in a very short interval. However, till then if it has to take on IndiGo at some point of time, it has to keep inducting quickly and getting the slots vacated by Jet Airways to make the most of the current opportunity.