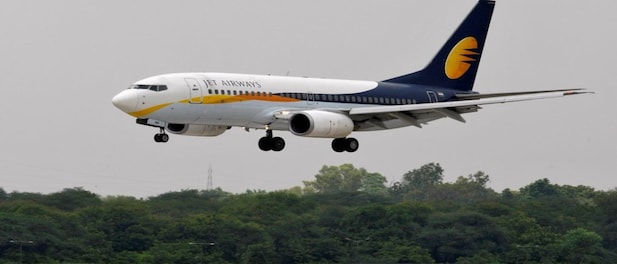 Senior Congress leader Anand Sharma on Sunday said the collapse of Jet Airways appears to be a "scam" being executed in the run-up to elections, and demanded intervention of the supreme court in the registration of an FIR in the matter.

Weighed down by huge debt and falling revenue, Jet Airways recently announced the suspension of its entire operations, leaving thousands of employees jobless.
A State Bank of India-led consortium of lenders is now running the airline under a debt recast plan.
"I can smell and see that it is a big scam. The collapse of Jet Airways appears to be a scam which was well thought out and being executed in the name of elections so that nobody will ask questions," alleged Sharma in a press conference.
He further demanded that the apex court take note of the issue and direct registration of an FIR in the "entire scandal".
Sharma also demanded that the matter be "re-investigated" and criminal responsibility and accountability be fixed for "ruining thousands of jobs".
"Since this is election period, nobody has talked about it," the Rajya Sabha MP said.
Referring to the lenders' consortium's refusal to infuse emergency funds in the airline, Sharma claimed that the debt burden of Jet Airways was "much smaller" compared to other businesses which were rescued by the Centre.
The over 25-year-old airline had sought a Rs 400-crore emergency fund from its lenders to whom it already owes over Rs 8,500 crore, but was refused as the airline was not ready to offer more collaterals.
"The Central government had rescued other businesses by re-structuring debts to the tune of Rs 30,000-40,000 crore.
Compared to this, the amount (debt) of Jet Airways was much smaller. Moreover, there was a resolution (accepted) by the lenders to save jobs and to save the airline," Sharma said.
"Once the resolution plan was accepted then the management and promoters moved out (but as) banks did not put money the fleet was grounded," he said, adding that the brand value of running the airline stood destroyed.
The Congress leader alleged that the consortium of banks has failed to adhere to the resolution plan accepted by it, and is responsible for "ruining" the lives of thousands of employees of Jet Airways.
"We are now told that the Airlines was registered in India and it has been deregistered and re-registered again.
Who are the people who are re-registering it so that the value would be brought down. You will find out that they are close to the ruling establishment," the Congress leader claimed.
SBI-led banks had invited bids for selling anywhere between 31 and 75 percent stake in the airline and have already received four initial bids from Jet Airways' foreign partner Etihad Airways, the sovereign wealth fund NIIF, and two private equity funds--TPG Capital and Indigo Partners.
Jet Airways founder Naresh Goyal, who, along with his wife Anita, was forced out of the airline late last month by the banks, had also put in bids, but was asked to withdraw after the four bidders threatened to walk out. The banks hope to complete the sale process by May 10.
Taking a dig at Prime Minister Narendra Modi over the issue, Sharma said, "finally, the so-called job-creating PM has reconfirmed during his last few weeks that he is a job destroyer".
Check out our in-depth Market Coverage, Business News & get real-time Stock Market Updates on CNBC-TV18. Also, Watch our channels CNBC-TV18, CNBC Awaaz and CNBC Bajar Live on-the-go!