Gangwal said for a company of the size and relevance of IndiGo, the composition of independent directors on the board should be more than the one-third currently. “The airline should not be run as a personal fiefdom.”

Rakesh Gangwal, the billionaire co-founder of IndiGo, said he is seeking a meeting with Prime Minister Narendra Modi to request him to intervene and straighten out suspect corporate governance issues at the parent company that he raised in a letter to market regulator Sebi.
“I am trying to see if the Prime Minister would ask the government to intervene and fix the issues that I have raised at IndiGo because it is a security and economic matter and the airline is part of the national fabric,” he said. The PM’s mediation would send an important message to other errant businesses that India has changed and his regime is not going to tolerate such governance lapses, especially in critical companies, he said.
On Tuesday, Gangwal asked Sebi to examine violations of corporate governance rules and questionable related part transactions (RPTS), escalating his simmering differences with co-founder Rahul Bhatia into a bitter public quarrel.
InterGlobe Aviation, the holding company that runs IndiGo, lost Rs 8,300 crore, or 13.75 percent, of market value since July 8 as investors began to worry that the acrimonious dispute will potentially affect the running of the airline.
IndiGo is the brightest star in a constellation of failed or struggling airlines in India. Since its launch in 2006, it has grown aggressively, consistently made profits and today carries nearly one in every second airline passenger in India.
InterGlobe shares closed flat at Rs 1,354 while those of competitor SpiceJet rose 3.7 percent at Rs 124.5 on Friday.
Not Looking At Control
In a three-hour sit-down interview with CNBCTV18.com in New Delhi on Thursday, Gangwal said he is not looking to gain control of InterGlobe Aviation. “But I believe that it is important that no one group or individual or promoter should have such significant control over a critical infrastructure as the airline.”
Gangwal said for a company of the size and relevance of IndiGo, the composition of independent directors on the board should be more than the one-third currently. “The airline should not be run as a personal fiefdom.”
Bhatia and his group companies control about 38 percent of InterGlobe while Gangwal and affiliates own around 37 percent.  A little above 25 percent is held by public shareholders, including global investors and funds.
“Indian corporate history is littered with carcasses of companies roiled by bad governance,” Gangwal said, referring to failed airlines such as Kingfisher Airlines and Jet Airways as well as other large companies. 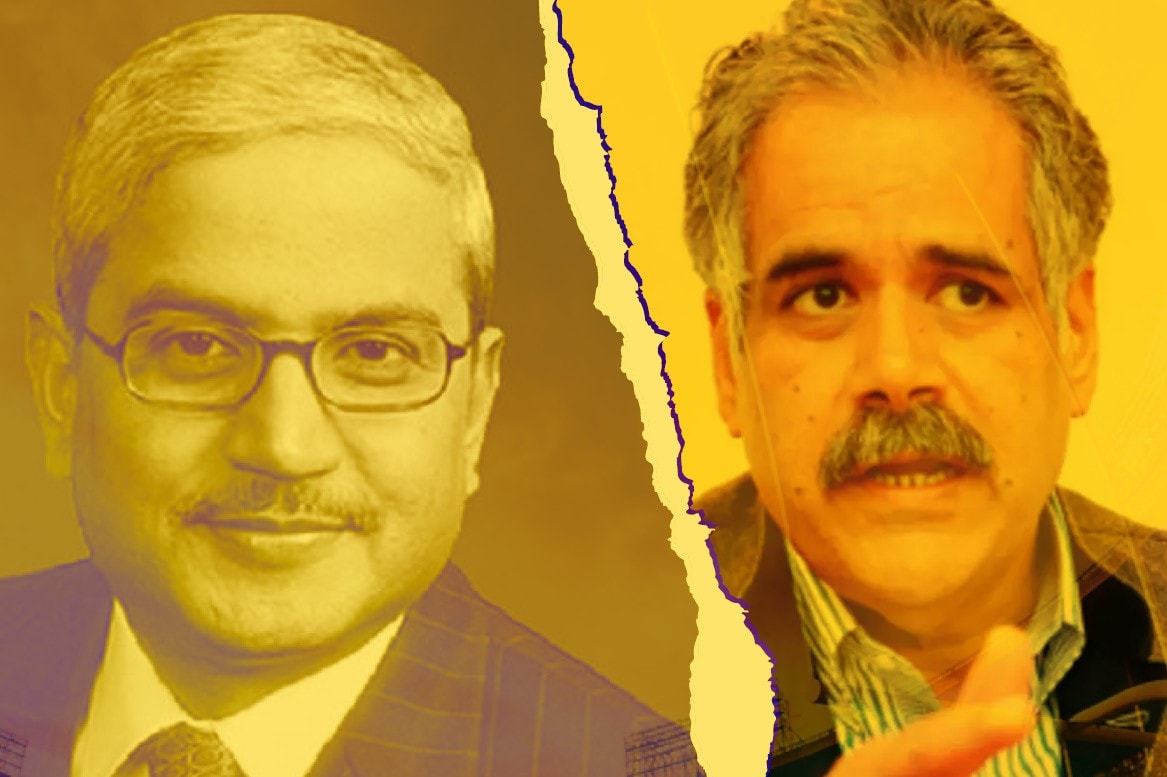 Though IndiGo has hastened with expansion on foreign routes, it has been unable to exploit Jet’s collapse in April as it did when Kingfisher went bust in 2012. One reason could be that the airline’s co-founders, who have long influenced its operations, no longer see eye to eye.
Gangwal, an aviation veteran of 30 years, said he is not interested in selling his stake — as is widely speculated — in IndiGo. “It is a great company.” He also said he is no longer involved in the operations of the airline, focusing instead on corporate governance issues.
The attempt to catch the attention of the PM and authorities are aimed at preventing the fate of other companies that suffered from lax adherence to corporate governance rules and weak board oversight, according to Gangwal, who was dressed in a red shirt and loose-fitting jeans for the interview.  The unusual rights of Bhatia’s holding firm IGE Group and the lack of independent directors at InterGlobe are at the root of the questionable RPTs and violation of governance norms, he said.
The IGE Group’s rights are drawn from a shareholders’ agreement between the co-founders. Though the agreement expires in November, the rights have been retained in IndiGo’s Articles of Association.
Bhatia’s IGE Group can appoint three out of six directors, name the chairman and decide on senior executives at IndiGo. The Sebi letter illustrates that Gangwal is unhappy with the appointment of both InterGlobe chairman M Damodaran, a former chairman of the regulator, and Ronojoy Dutta, chief executive of IndiGo.
Gangwal said government and regulatory intervention have been necessitated because the vote of shareholders holding more than 75 percent shares is required to amend the Articles of Association to effect these changes. The IGE Group with its 38 percent stake can defeat such an attempt, according to him.
Sebi has asked InterGlobe to reply by July 19.
Gangwal, an American citizen who spends his time between Washington DC and Miami, said in May 2019, he proposed to Bhatia that the board strength be increased to eight. IGE Group’s three nominees would now become four, there would be three independent directors, including a woman to comply with a Sebi requirement, instead of two, and Gangwal would continue to have the remaining seat, under the proposal.
In return, Gangwal said he demanded that the process of how IndiGo enters into RPTs must be overhauled.  He recommended three vital changes:
Gangwal recommended that if the IGE Group wants to dilute the above process, it must get shareholder approval. Gangwal said he also asked that last provision of the SHA that binds him to vote with Bhatia to appoint executives be repealed.
The IGE rejected the proposals, said Gangwal, who flew to London on Thursday night to watch Sunday’s World Cup cricket finals.
“If I wanted control, why have I sought the induction of more independent directors and retaining my nominees (self) in the board to just one,” he said. “Time to allow truly independent directors become stewards of this national asset.”
When contacted, Bhatia said a press release that he would issue on Friday would answer most of the questions.
A spokesman of IGE Group said on Friday night the company has been willing to discuss the expansion of the board but it is Mr Gangwal who has made that also a part of his ‘package deal’. "Further, Mr. Gangwal has not hidden his desire for dilution of IGE Group’s rights and his desire to walk away from the mutual obligations between the parties," he responded to CNBCTV18.com's questions by email.
IGE Group also said the materiality of the transactions for InterGlobe Aviation is not significant as it is only 0.53 percent of the consolidated turnover for 2018-19.
The RPT Quarrel
Gangwal said the value of RPTs has reduced in recent years after he put his foot down on these arrangements. He asked if these RPTs were in the best interests of IndiGo as IGE Group claims, then why was the company’s appointment as a general sales agent in the passenger and cargo segments not renewed.
“If one allows these things, where does one draw the line?” he asked.
CNBCTV18.com asked Bhatia about why the GSA contracts were not renewed, but got no response.
During the interview, Gangwal made a startling disclosure. He said he came to know of the existence of IGE Group's GSA arrangement only at the time of IndiGo’s IPO in 2015.
The IGE spokesman said this is not correct.
Many analysts find it hard to believe how Gangwal, a tough-as-nails aviation negotiator who has won lucrative billion-dollar plane and engine orders, entered into a shareholder’s agreement (SHA) that gives him little power.  “I allowed the SHA during inception because Rahul (Bhatia) was a great friend who I had known for decades and I gave him blind trust.”
CNBCTV18.com asked Gangwal if he indeed wanted more independent directors, why had he proposed in May that the board appoint only one such additional director.  He replied that it was a compromise to see if Bhatia and he could find a middle ground and, in return, the company would need to put in proper RPT protocols.
“I would like to not have to vote with Rahul after the SHA expires this November.”
Gangwal said he stopped the operation meetings he used to hold every month from August 2018 after he became frustrated with how things have become so wrong in the area of corporate governance. “I decided to get step out of operations and focus on corporate governance.”
IndiGo, he said, was built on two foundations — one, business model and two, corporate governance. “Without good corporate governance, IndiGo will become just another airline and may or may not exist somewhere down the road.”
Check out our in-depth Market Coverage, Business News & get real-time Stock Market Updates on CNBC-TV18. Also, Watch our channels CNBC-TV18, CNBC Awaaz and CNBC Bajar Live on-the-go!
Tags