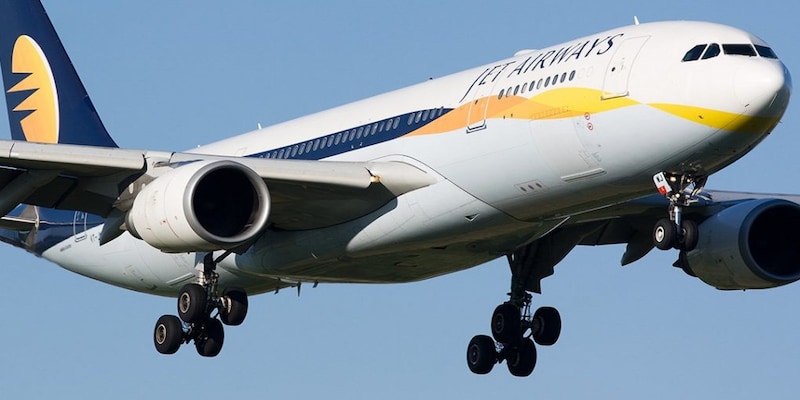 Sahara Airlines was acquired by Jet in 2007 to kill competition triggered by the emergence of low-cost airlines like IndiGo, SpiceJet and GoAir, and the competition is said to have contributed in its downfall.

Jet Airways was finally grounded for now when its last flight, a Boeing 737, touched down at the Mumbai airport early Thursday after departing from Amritsar, almost 26 years after it took off from here for Ahmedabad as an air taxi operator.

The aircraft VT-SJI (flight no. S2 3502), belonging to the erstwhile Sahara Airlines, departed from Amritsar at 10.24pm on Wednesday and touched down at Chhatrapati Shivaji International Airport here at 12.22 am on Thursday, ending the "Joy of Flying" for its millions of customers.
Sahara Airlines was acquired by Jet in 2007 to kill competition triggered by the emergence of low-cost airlines like IndiGo, SpiceJet and GoAir, and the competition is said to have contributed in its downfall.
"I generally fly Jet Airways. But when I boarded it from Amritsar on Wednesday night, we were told this is the last flight the airline is operating as it is shutting down for the time being," said Amarjit Singh, who hails from Ludhiana.
Singh, a transporter by profession who frequently visits Mumbai for business, said he is hopeful of the airline "resuming" operations soon.
Set up by Naresh Goyal on April 1, 1992, Jet Airways's first flight took off from Mumbai for Ahmedabad on May 5, 1993, as an air-charter operator, which does not require a published schedule.
However, more than a year later, it was granted the scheduled operator permit on January 14, 1995.
Another passenger, Shareef Abdullah, who runs a hotel chain and is a frequent flyer with the carrier, said it was painful to know that the airline is shutting down.
"They announced it both on departure from Amritsar and after landing here that this was the last flight. It is really painful," he said.
The abrupt cancellation of the airline's services, for the time being, have left thousands of passengers stranded.
"I, along with my wife and children, had to travel to Ahmedabad early this morning. I had booked five tickets a month in advance. But when I reached the airport here, I was informed they have cancelled the operations," said Madan Lal Imali, who was travelling to his native place Pali Killa in Rajasthan for a family function.
He said his wife and children were very disappointed as it was to be their maiden flight.
"I had also booked train tickets in an AC coach and paid Rs 2,500 each for five seats to travel to Pali from Ahmedabad. Now I have been forced to cancel that journey as well, besides losing money," said Imali, who was to board the airline's flight 9W2929 for Ahmedabad from here post-midnight.
Struggling for months, Jet Airways chief executive Vinay Dube last evening announced the carrier was shuttering operations as his last-ditch attempt to get Rs 400 crore was rejected by lenders.
The decision leaves 20,000 jobs at stake and over Rs 8,500 crore of public funds, that the banks lent to the once-leading airline, at the risk of going down the drain.
The airline also owes lakhs of rupees to passengers and its vendors.
The lenders have put the airline for sale and four companies have shown preliminary interest.
Check out our in-depth Market Coverage, Business News & get real-time Stock Market Updates on CNBC-TV18. Also, Watch our channels CNBC-TV18, CNBC Awaaz and CNBC Bajar Live on-the-go!