Jet Airways: These are the airlines that benefitted the most from its demise

Updated : November 19, 2019 04:57 PM IST
The Indian growth story has long been driven by capacity, but cut to April 2019, one sees capacity growth taking a dramatic turn.
India is still 4.5 percent short of the peak departures numbers recorded in the last three years.
The Jet group – Jet Airways and Jetlite — carried 52,39,311 passengers in Q3-CY18.

What a turbulent year this has been for Indian aviation. The death of Jet Airways in April, another set of quarterly losses in the second quarter by the only two listed airlines and stagnated growth in passenger number — 2019 has been Annus Horribilis for India’s airline industry.

The overwhelming belief after Jet’s collapse was that as India is undergoing overcapacity, capacity will be rationalised. That has not happened. IndiGo, India’s biggest airline, actually  declared another loss for the same quarter this year.

The July–September quarter has traditionally been a weak quarter and airlines have struggled financially and operationally in the past. But this year was different because July–September was the first full quarter that had no Jet Airways. Remember, by then Jet’s competitors had lapped up its slots and aircraft.

The Indian growth story has long been driven by capacity. But cut to April 2019, one sees capacity growth taking a dramatic turn. The MAX8 which Spicejet was hoping to induct in large numbers were grounded following two fatal crashes. The A320neo family aircraft which both IndiGo and GoAir ordered in large numbers continue to face engine troubles leading to delays – three years after induction. Vistara was almost a year away from additional aircraft in fleet.

But the melee led to Spicejet and Vistara taking up former Jet Airways aircraft and starting operations. Yet, at the end of this quarter, the capacity has returned, but not exceeded. Which is why passenger growth is in low single digits and not the 20 percent expansion that we were used to not long ago. However, while every year there has been stagnation or dip in passenger numbers in the July –September quarter, this time around the numbers remained stable, primarily due to the fact that the numbers did not balloon in the previous quarters like in the past.

The Jet group – Jet Airways and Jetlite — carried 52,39,311 passengers in Q3-CY18. The traffic this quarter has been up only 2 percent, which gives a good benchmark to see which airline got a majority of the 52 lakh passengers that belonged to Jet. The industry carried a little over 7.5 lakh passengers more this year versus the last for the same quarter with majority of it coming from the mainstream airlines.

Clearly, there are multiple winners with each airline trying to corner whatever was possible. In terms of absolute passengers, IndiGo added 21 lakh passengers, cornering a major share of what was left behind by Jet Airways. But due to its size, this translates into a growth of 14 percent for the airline.

The highest growth was with Vistara and AirAsia India – the Tata Group-owned airlines, growing at 57 percent and 42 percent, respectively in terms of passengers carried. Spicejet, which took the maximum aircraft from Jet Airways, had a modest growth of 28 percent in passenger numbers, even when its capacity by ASK (Available Seat Kilometers) grew by 43 percent. 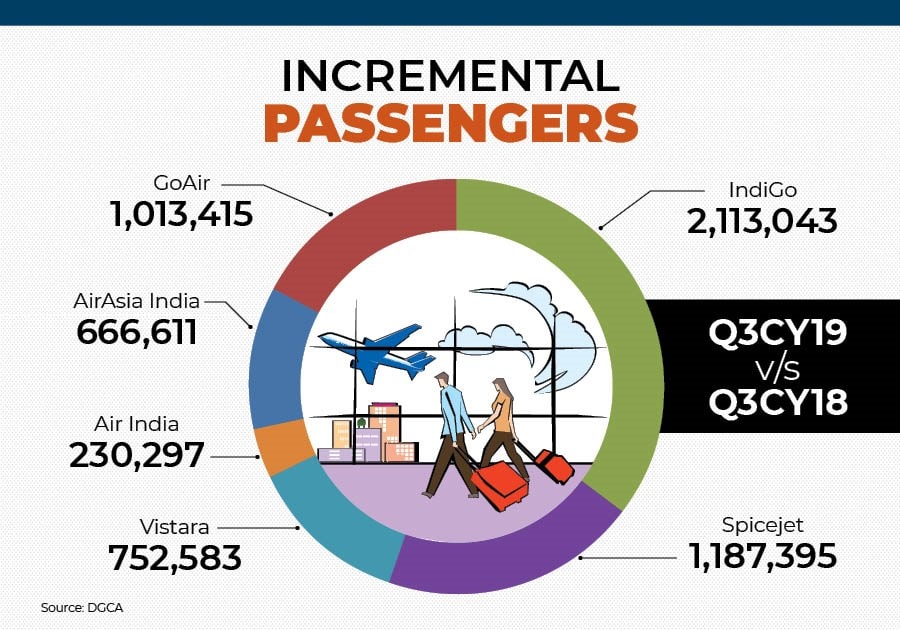 However, growth follows capacity and has largely been in sync in recent years. A comparison of capacity deployed in the market over the same quarter the previous year against the passengers added for the same period shows that AirAsia India and Vistara have added far more passengers than the capacity added, while GoAir and IndiGo have also been on the positive side. 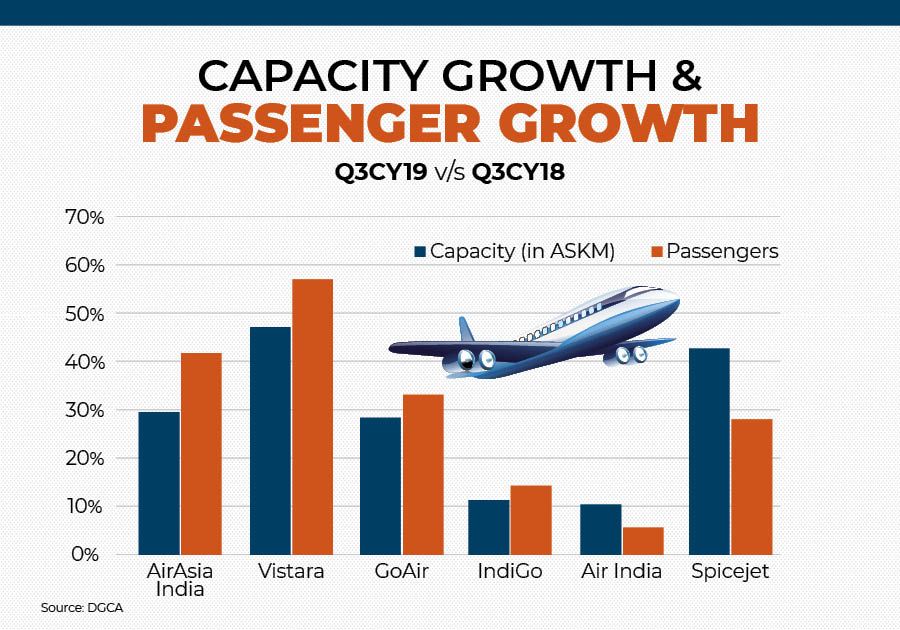 The surprising numbers come from Spicejet, which added 42.8 percent capacity by ASK but could add only 28 percent of passengers. An indication that the airline has to look at its route network seriously and possibly look for shorter hops than longer flights to create the balance.

While IndiGo complained that it had not got its due in terms of re-allocation of slots, the airline has carried 21 lakh additional passengers. This period has turned out to be a blessing in disguise for AirAsia India and Vistara, which would have otherwise found very difficult to grow in Mumbai. The unprecedented growth for Vistara and AirAsia India is what defined the market after the fall of Jet Airways. The good news is that the market has  now stabilised and saturated again in terms of slots and capacity. How it turns out from here on is anybody’s guess.

Now only if the PW engine issues are fixed and the MAX8 in back in the air again and capacity at airports continues to increase.

Is that asking a lot? But isn’t aviation about soaring dreams?