The passenger growth for the January-March period remains higher than that of the growth to the same period last year. The passengers carried this year amounted to 453.03 lakhs as against 364.13 lakhs last year for this period, the report said.
One of the major reasons for this mild slip in the air passenger growth could be that flyers were facing issues in dealing with the airlines. Most passengers, 63.9% to be exact, complained of the airline's customer service.
The complaints due to the unsatisfying customer service increased from 19.3% in February to 33.6% in April. In March, the complaints on the same were recorded to be 27.2%. (Source: DGCA)
Recently, Saurabh Rai, a cardiologist, had accused the IndiGo staff of manhandling and deboarding him from a Lucknow-Bengaluru flight after he complained of mosquitoes onboard.
The airline claimed however that Rai was offloaded at Lucknow for unruly behaviour. It alleged that he even attempted to instigate other passengers to damage the aircraft.
Right after the news broke out, the airline stated it will use electronic mosquito bats to deal with mosquito menace onboard flights.
Not only IndiGo, but Vistara faced its own share of problems.  A passenger onboard a Vistara flight complained of spotting a cockroach in his food and took to Twitter. The airline, however, rejected the claim and said, "the insect was not on or from the meal and we are fumigating the aircraft regularly."
Apart from complaining about the hostile customer service, more than 20% of the passengers have complained of flight problems - be it technical or otherwise - it was not mentioned in the report.
The technical issue in aircraft was the second largest reason, 20% in numbers, for the airlines to cancel their flights. (Source: DGCA)
During this 18-month period, IndiGo faced three cases of engine shutdown and three other cases of flight cancellation, after it was identified that the engines had serious technical issues.
Faulty engines of Pratt&Whitney were not only seen in IndiGo but also in GoAir.
The main reason for airlines to cancel their flights, however, was put under the miscellaneous category, which can include weather issues, among other reasons. Air Odisha reported the highest number of cancellation in flights, more than 45% of the airline's flights were cancelled.
Recently, a dust storm with wind speed exceeding 100 kmph brought operations at the Indira Gandhi International (IGI) airport to a halt during the evening rush hours, with close to 70 flights being diverted to other places.
The operations at the airport had to be shut down for close to two and half hours, sources at Air Traffic Control (ATC) at the airport said, adding that the magnitude of the disruptions in traffic was more than what was anticipated.
The flights have mainly been delayed because of the late arrival of the incoming flights, which the report categorises under the term 'reactionary.' A total of 57% of the flights have been delayed due to this reason, which consequently causes inconvenience to flyers and fall in the air passenger growth., making it a vicious cycle.
The other major reason for the delays in flights, the report said, is because the Air Traffic Control (ATC) had ordered to do so. The ATC is likely to have taken the step due to congestion or due to the incompatible weather for flying. A total of 20% of the flights were delayed due to this reason. 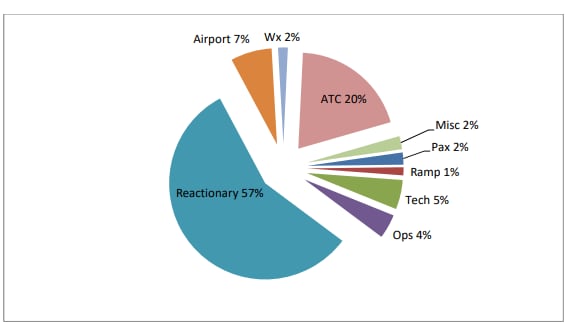 (Source: DGCA)
The report, however, shows that the airlines had a higher passenger load last month. The increase in the load is reasoned as April is the beginning of the 'tourist season,' or in simpler words, it is the beginning of summer holidays and holiday season for most in the country.
Check out our in-depth Market Coverage, Business News & get real-time Stock Market Updates on CNBC-TV18. Also, Watch our channels CNBC-TV18, CNBC Awaaz and CNBC Bajar Live on-the-go!