Air India was due to be operationally profitable the coming year. So what happened?

Updated : December 11, 2019 02:13 PM IST
Air India has reported a loss of Rs 8,640 crore for the 2018-19 financial year despite a domestic marketshare of 12.9 percent and an international marketshare of 68 percent.
Because of the ownership and accountability structure, in spite of key assets and advantages, the stakeholders at Air India have not been aligned towards a single outcome.
Air India’s leaders have been responsible for the airline but accountable to the political executive.

Air India has reported a loss of Rs 8,640 crore for the 2018-19 financial year. This, despite a domestic market share of 12.9 percent and an international market share of 68 percent. The balance sheet continues to be extremely weak with Rs 29,000 crore of debt (the debt has been halved, from the previous 58,000 crores, thanks to the creation of a special purpose vehicle).

While the government has signalled clear intent of divesting its stake in the airline, owing to the adverse economic climate, sharp global slowdown and severe liquidity crunch, the divestment is likely to be challenging. Until that time, the airline has to stay aloft.

Can it? There are no easy answers there.

But there are plenty of answers to why a once-proud carrier today stands crippled. And an analysis of how the state of affairs came to be — due to a confluence of factors — offers valuable insights for business and government.

Because of the ownership and accountability structure, in spite of key assets and advantages, the stakeholders at Air India have not been aligned towards a single outcome. Over the years, as the airline bled cash, the demands for additional equity infusions and for writing off the debt increased.

Equity was infused time and again. Yet, on the turnaround front, the airline was found wanting and the balance sheet spiraled from bad to worse. The issue of incentives was never addressed. Eight leadership changes since 2003 – with no leader from a core aviation background – only proves this point. 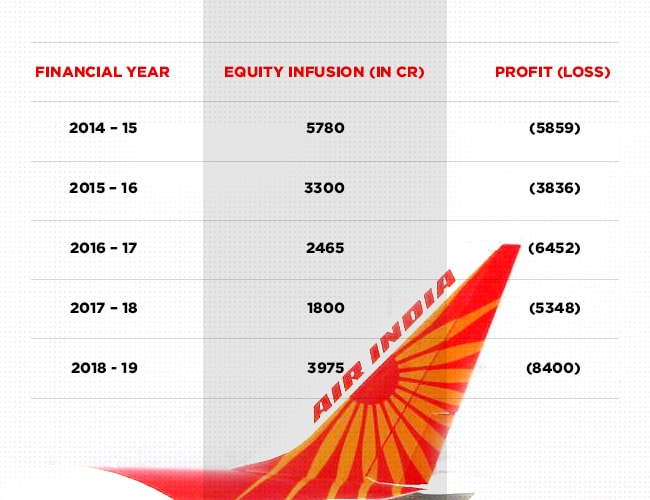 Several opportunities presented themselves where Air India could have brought in a seasoned chief executive. And given the state of aviation markets, there was no dearth of professionals. Indeed, most of the private Indian airlines had and have expatriate talent running the airlines. But this was not to be for Air India.

The usual refrain was and is that the losses are driven due to decisions in the past, due to outstanding receivables, due to the forced flying of unprofitable routes and due to a host of other factors. But a closer look at the numbers and correlation to perks, promotions and payouts indicates the incentives have simply not been aligned.

Even as the airline reported the recent loss which was in excess of a billion dollars, it was accompanied by a forecast that Air India expects to be operationally profitable in the coming year. The assessment is based on several assumptions including stability in the price of oil. The core issue of cost has been glossed over. Air India’s cost per available seat kilometre continues to be 18-22 percent higher than competitors. As such, they can simply discount and take traffic from Air India or match prices and be profitable while Air India bleeds.

In any business, performance at a net level is what counts. For airlines, EBITDA numbers are good towards showing efficiency or towards decision making on routes. But overall the focus cannot be on EBITDA. As Warren Buffett put it, “people who use EBITDA are either trying to con you or they’re conning themselves”.

The reality is that the FY19 loss of Rs 8,640 crore was reported during a year where there were several opportunities to exploit competitor challenges and weaknesses both in India and overseas. Over the last seven years, the government has infused Rs 30,520 crore into the airline, majority of which has been used up in working capital. If one goes back only to the last three years, a total of Rs 8,240 crore was infused into the airline. Yet the results are yet to be seen. In product, in people and in performance.

As such speaking of potential operational profitability is at best narrative distortion.

Anecdotes of Air India and complacent employees are quite prevalent. And due to confirmation bias, as one seeks evidence of this, it is sure to be found. At the ticket offices, at the airports and on airplanes. Yet ask private airlines where they like sourcing talent from — especially in technical ranks — and it is almost always from Air India. This apparent contradiction is quite telling.

In spite of challenges with firm culture, the institutional knowledge contained within Air India cannot be replicated. It continues to be the only airline with a large captive maintenance facilities, the only airline to fly an expansive international network, and the only airline that works to government mandates including transporting the President and Prime Minister (on Air India One) and conducting sensitive operations such as operations Raahat (evacuation of Indian citizens and foreign nationals from Yemen) when required. As such it provides for exposure that is simply not available elsewhere. And thus it makes for an excellent ground for honing talent. And for poaching talent.

Within the airline, a culture change is a distant dream. As such clashes continue. Some are inevitable. Others are fuelled by management action and inaction. For instance, management continues to blame political interference for the woes.

Yet, the simple exercise of quantifying the damage caused and then asking for a waiver of that amount (whether via debt reduction or other means) has not been undertaken. Rather, in looking to pin the blame, inadvertently a culture of non-accountability continues. And for an airline with ~20,000 employees, 13 unions and a fleet of 124 aircraft this simply cannot be the case.

The term preference falsification was coined by Professor Tim Kamur of Duke University. It captures the fact that while stating preferences there is a tendency to gravitate towards what is socially acceptable or least risky reputationally even while this may be in contradiction to true belief.

After all 20,000 employees equates to more than 40,000+ votes; an airline failure is almost certain to make headlines for several years (much like the Kingfisher and Jet Airways debacle); and the Air India brand continues to be one of the strongest and easily recognisable brands so no one wants to be responsible for killing the brand.

Thus while speeches and memos often indicate that several actions will not be tolerated, when it comes to affecting deep structural changes in the airline, there has been no action. Quantitatively this is reflected in the financials, qualitatively in the customer perception and operationally metrics such as on-time performance and fleet utilisation.

The misaligned incentives, narrative distortion, culture issues and preference falsification have led to a state of inaction and malaise. The airline is cruising along losing a billion here and another billion there. And with the most recent loss of Rs 8,640 crore, the total losses over the past five years now add up to a whopping Rs 29,895 crore. (To put that number in context, compare it to the budget for the entire state of Delhi in 2019 at Rs 60,000 crore).

Over the years, intervention required tough managers who were not afraid to address the issues head-on, whether with government or with suppliers or with unions. But no such action was seen. No one had the wherewithal or appetite for intervention. And thus emerged the general malaise and perilous non-intervention.

Air India, a once-proud carrier, stands crippled due to a confluence of factors. The contention is that it will likely be sold off in parts. A turnaround is out of the question.  And with no more funds coming, a sale is the only option.

As the government prepares for divestment, one is reminded of the novel The Sun Also Rises by Ernest Hemmingway. There is a line where Bill asks Mike how he went bankrupt. The response, “Gradually and then suddenly.”

Air India has been a similar story.