5 lessons for entrepreneurs from the Jet Airways saga

Updated : May 27, 2019 12:34 PM IST
Jet Airways’ rise from a few aircraft to a 119 aircraft behemoth has lessons for entrepreneurs the world over.
Even now, the Jet saga is still unfathomable to many. But in hindsight, there were several factors that contributed to this.

India’s oldest private airline, Jet Airways, suspended operations after 26 years. With cash-flow dried up and no additional credit lines, it was an outcome that was inevitable. A vibrant venture that at times set the bar for service and hospitality was severely crippled. Investors, owners and customers alike suffered. Even now, the Jet saga is still unfathomable to many. But in hindsight, there were several factors that contributed to this. A study of how this came to have critical lessons for entrepreneurs the world over.

Consumer preferences change over time. And for B2C businesses, especially those that have witnessed success in the past, changing and adapting is a very tough sell. The usual pattern with successful ventures is that management starts to become complacent and believe in its own narrative, costs spiral and hubris sets in. Indeed, this was the case with Jet.

From 1992 to 2004, the airline had a good cumulative performance with strong growth, cash-flows and profits. The capital market listing in 2005 was over-subscribed at 1.8X and helped the airline raise Rs 1,899 crore. Expansion followed.

But importantly at this time, the market dynamics were such that the only other competition was the state-run airline. The total addressable market was much smaller with a total of 1.52 crore domestic passenger taking to the skies. The nature of demand was different with air travel catering largely for business elite.  Pricing margins were healthy and concepts like “rail-air” parity were unheard of.  Smaller airlines came and went while Jet continued to soar higher.

But markets are dynamic entities. And sure enough in 2005 a revolution began which disrupted the very nature of the market. Namely: low-cost carriers (LCCs).

The LCC revolution began with a number of carriers launching in quick succession. The business model was based on efficiency, simplicity and driving a high return on assets – all towards offering a lower price to consumers.

The LCCs operated on a philosophy that stared squarely in the face of the Jet Airways business model. Summed up in one sentence: for an LCC, success meant offering even lower fares. The elements that enabled this were a single aircraft model, simple route networks, a no-frills offering, no sales on credit and a volume-based strategy. This not only started stimulating additional traffic but also gradually ate into Jet’s profits and marketshare.

To be fair, Jet did attempt to respond. But not in a manner that struck at the heart of the disruption. The environment demanded a complete revisit on strategy and costs. Rather it played defense. It created barriers for low-cost carriers often influencing policy towards creating a competitive barrier; made an uneconomic acquisition in buying Air Sahara for Rs 1,450 crore; failed to focus on its balance sheet; flew a mixed fleet with cost and revenue impacts; and continued aggressive international expansion in spite of mounting debt levels. The results showed in the numbers.

Jet Airways failed to recognise that the new business model was highly disruptive and the response required adjusting its own business model – not introducing new products.

3. Any venture with a cost base that is not covered by revenues will eventually falter

For any sustainable business, revenues must be higher than its costs. This is especially true for consumer-facing businesses where price is the prime consideration. The business plan may incorporate strategies like loss leadership or discounts towards establishing marketshare but eventually, the revenues have to cover costs. Not doing so is a recipe for disaster.

For Jet Airways, costs were more than 35 percent higher than its nearest competitor. But it was pricing at levels similar to competitors. Thus on the same fare levels, competitors could make money while Jet could not. Or in cases where Jet made money, the margins for competitors were much higher. Jet attempted to get its cost in line – but the difference was so great that even attacking the cost structure with a hacksaw would not get the desired results. The focus would have to be on the revenues. But here too the disruption didn’t help.

Jet’s business model included in the ticket ancillary streams such as buy-on-board meals, strict baggage allowances, cancellation fees, seat-selection fees and special services. Competitors unbundled this offering and marketed it as giving the consumers choice and a lower price. And behavioral dynamics soon had consumers gravitating to competitors.

A former CEO of Aer Lingus — a carrier that successfully reinvented itself to compete with the low-cost revolution — once said, “Costs are similar to jogging. You have to focus on it regularly else you get fat.” This is exactly what happened to Jet. 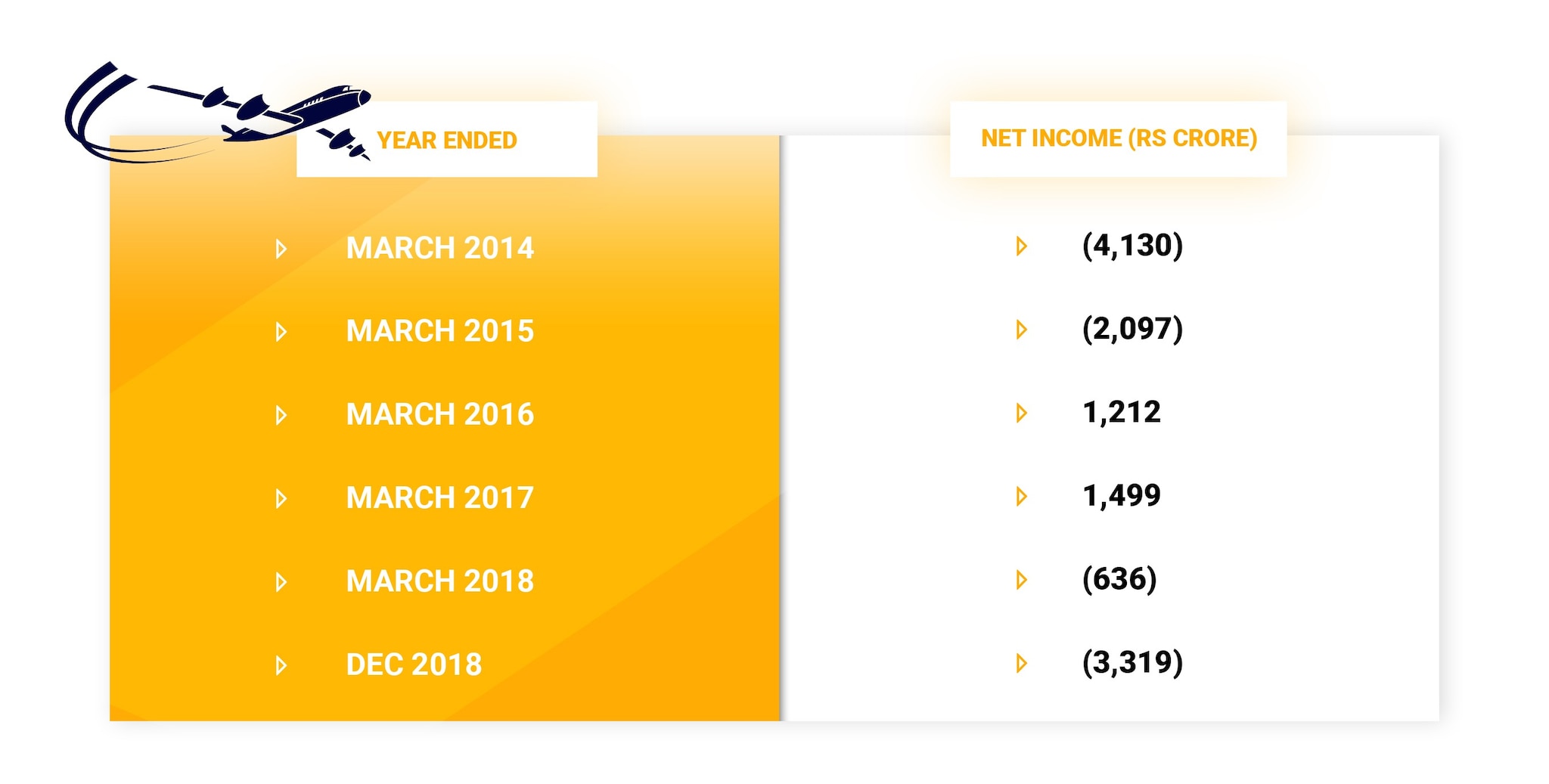 4. Regardless of company size a focus on the balance sheet is essential

Some ventures like airlines are capital intensive. And they are exposed to a variety of risk factors due to the very nature of business. Thus, adequate capitalisation and ensuring balance sheet strength is critical for success. It also positions the business to withstand black swan events which depending on risk exposure can have significant impacts.

In the case of Jet, one did not see this discipline. For instance, despite IPO proceeds of Rs 1,899 crore, the airline’s debt doubled and then grew exponentially reaching Rs 14,280 crore by 2010. The year 2014 brought some respite when Etihad acquired a 24 percent stake in Jet Airways for Rs 2,060 crore. The infusion was to help Jet bring down to roughly Rs 9,000 crore. However, only 24-26 percent of the equity infusion was utilised towards debt repayment with the rest being taken up by the enormous working capital requirements of the company. Reasons for this were many including short-term targets, lack of accountability and short management tenures and warrant further examination.

To continue, there was a requirement for additional financial structuring. This was done and it did help. Actions included the sale of redemption points from the frequent flyer programme, secondary leases of aircraft, sale and leasebacks, selling of a land parcel and additional credit lines. But the cash-drain continued because operations were not profitable and the balance sheet was weak.

Consequently, loan quality, liability structures, liquidity, capital structure and unencumbered assets – all were in question. The firm did not have adequate assets for financing even current operations let alone for future growth. A shutdown was inevitable. 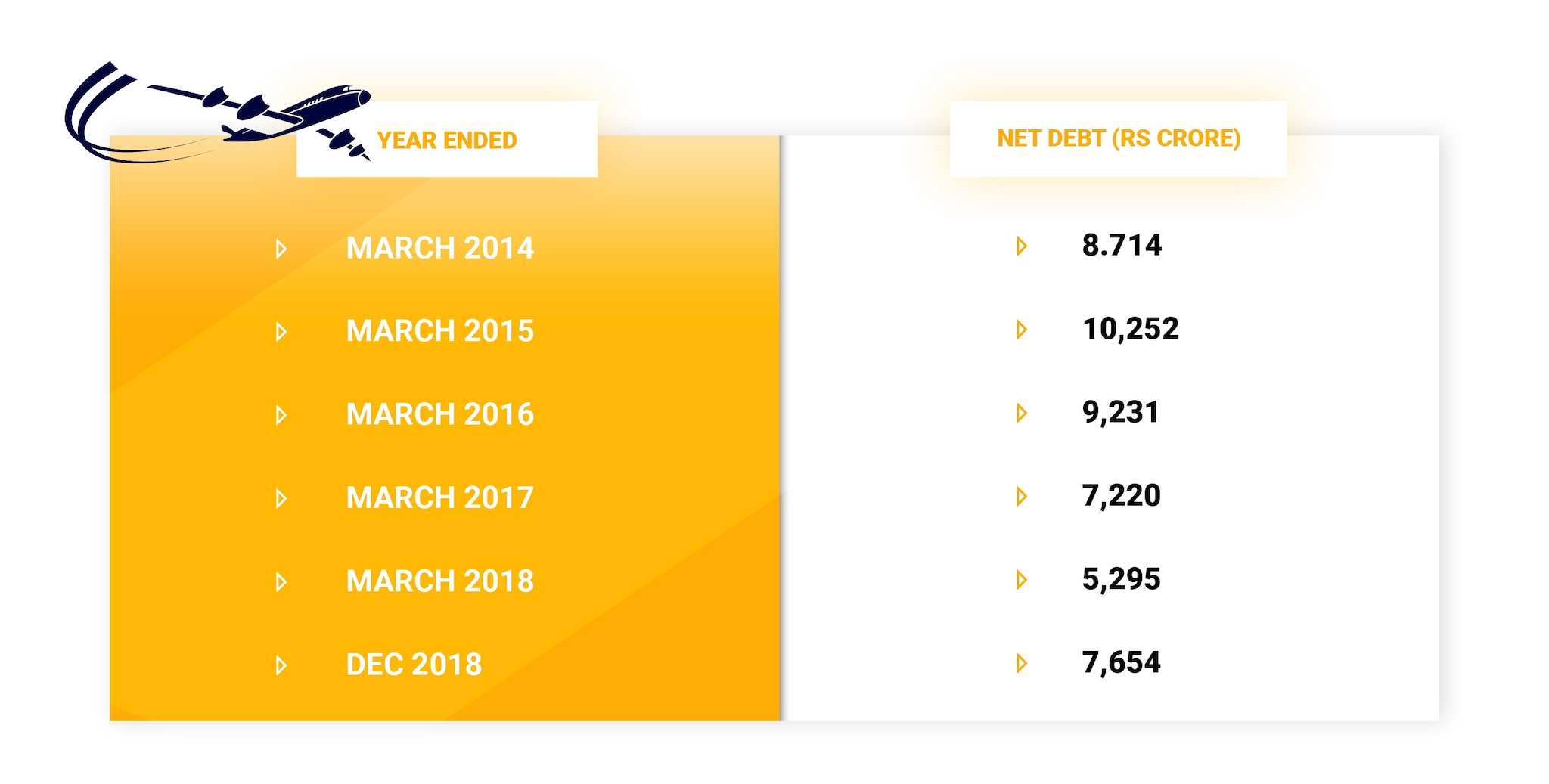 5. A coherent strategy and a clear compelling vision is critical to success

Until the suspension of operations, Jet was operating in one of the most lucrative markets. The total addressable market and potential was and is enviable. With a 300 million strong middle class, low air travel penetration and an increasing propensity to spend, India is targeting 500 million passenger trips in the next 20 years.

Forecasts estimate that India will be the third largest aviation within the next 6–7 years. Yet, as the legendary investor Peter Theil states, “All credit is given against positive claims on the future.” And the fact that bank lending never came in spite of Jet Airways being a significant and established player in the market indicates that the claim on the future as it pertains to Jet was not positive. Even now the fact that Jet is still waiting for investors is quite revealing on the size and depth of the challenges.

As Jet faced challenges on all fronts, it was found wanting for a clear coherent strategy. Whether this was on business model, on aircraft, on financing, on value proposition or on costs. At various times Jet positioned itself for various segments. It priced as a low-cost provider while offering a full-service product. It inducted different aircraft types complicating its cost structure. It partnered with Etihad but reallocated capacity to a competing alliance. It flew on routes to compete with Singapore Airlines and Emirates but used a smaller aircraft which led to a vastly different product experience. The strategy was confusing – to say the least.

Jet’s rise from a few aircraft to a 119 aircraft behemoth has lessons for entrepreneurs the world over. In that, a clear coherent strategy is as much as what not to do as it is on what to do. And in that, a clear compelling vision aligns stakeholders towards a singular goal. In this case, neither happened.

In trying to be all things to all people Jet Airways ended up as just another airline albeit with a much higher cost base which was not covered by revenues. A clear, compelling strategy and a compelling vision may have made for a smaller airline – but one that would still be flying.

Satyendra Pandey has held a variety of roles within the aviation business. Most recently was the Head of Strategy & Planning at a fast growing airline. Previously he was with the advisory firm CAPA where he led the Advisory and Research teams. He has also advised several startup ventures. Having lived and worked across four continents, he is an alumnus of the University of New South Wales and the London Business School. He is also a certified pilot with an Instrument rating.
Tags aviation Entrepreneurship Etihad Airways jet airways Startup Views