From SUVs to e-scooters, Indian EV sector grows over three times in 2022

2022 was truly an electric year for the auto industry. From hatchbacks to SUVs to bikes there was no stopping the electric vehicle (EV) boom, as Indian roads witnessed a nearly three-fold rise in this fast-growing segment. 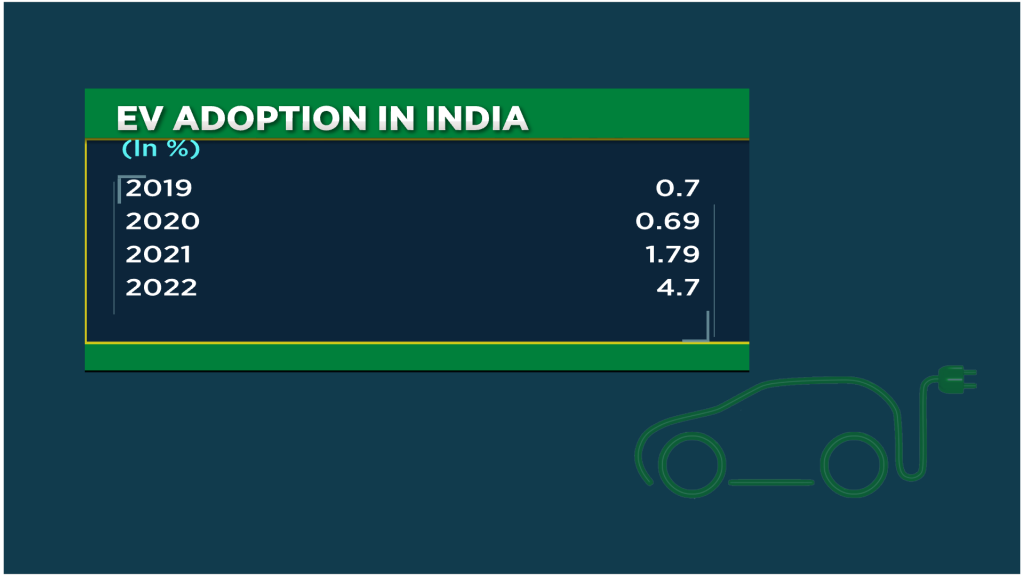 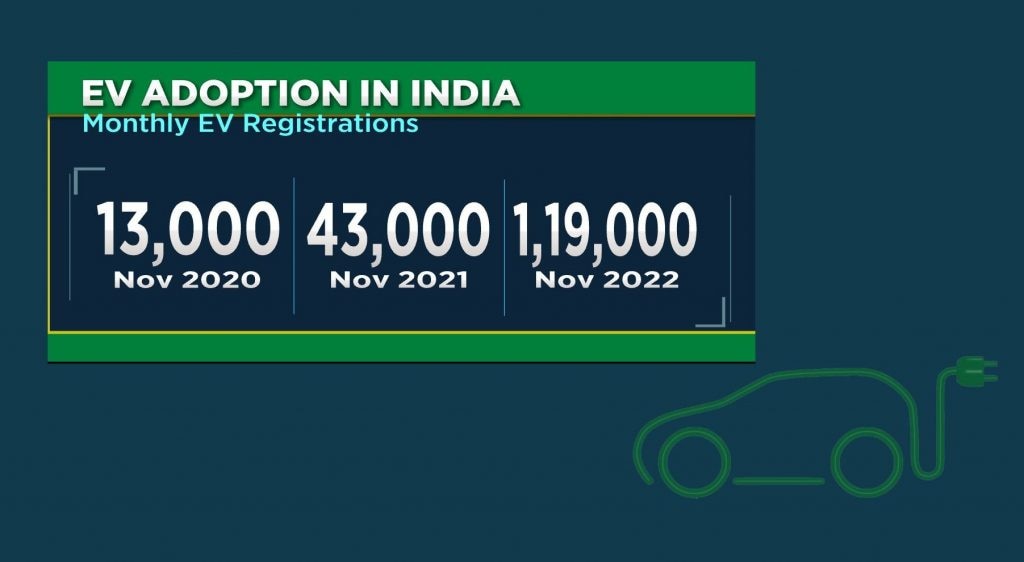 According to the FADA report, cumulative retails in the first six months of FY23 stand at 18,142 units, registering a 268 percent year-on-year growth as against 4,932 EVs in H1 FY22. Importantly, the report also suggests that there’s continuous month-on-month growth as the sales figures in July-September 2022 were at 10,015 units, up 23 percent against 8,127 units in April-June 2022.

“The buoyancy seen in auto sales also rubbed off on the electric vehicle industry this year. November saw a 186 percent growth to 1,20,660 EVs while the year is expected to close at nearly a million units sold. Just in Q1 and Q2 of FY23, we have seen a 290 percent increase in research for EVs on CarWale, Banwari Lal Sharma, CEO Of Consumer Business, CarTrade Tech told CNBC-TV18.com

Among states, Delhi is leading the way with 10 percent of all vehicle registrations for EVs. When it comes to EV adoption, Karnataka is at 6.1 percent, Maharashtra at 5.6 percent and Tamil Nadu at 3.8 percent. 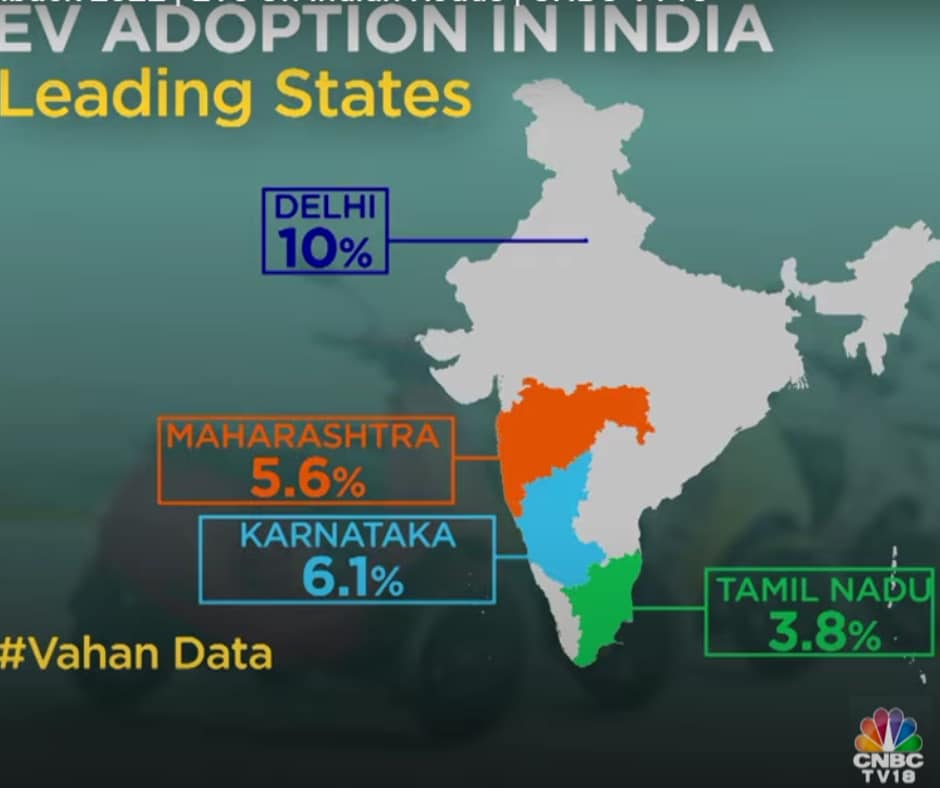 Interestingly, over half of the EVs in the country are three-wheelers, largely used for commercial transport, followed by nearly 8 lakh two-wheelers. As on December 9, around 64 original equipment manufacturers (OEMs) of EVs have been registered and 7.47 lakh EVs under FAME India Phase II have been sold.

Nitin Gadkari, Ministry of Road Transport and Highways (MoRTH), while replying to the Rajya Sabha said, that over 18 lakh electric vehicles (EVs) have been registered in India as of December 8, 2022.

The two wheeler sector in EV on a rise
The electric two wheeler industry is growing month-on-month in India.  In the festive month of October sales of electric two wheeler crossed the 75,000 mark for the very first time and in November the sales stood at 76,148 as per data from  government website Vahan, which tracks vehicle registrations.
If we look at the numbers, nearly over 4,30,000 units were sold in the first eight months of the ongoing fiscal year. This means that over 1,500 electric two wheelers were sold each day from April-November 2022.
According to data by Society of Electric Vehicle Manufacturers (SMEV) a total of 4,9563 electric two-wheelers have been sold till December 25, 2022. This marks an increase of 99.6 percent from 245660 units in 2020-2021.
“Electric two-wheeler sales have seen a spike of 328 percent in YTD Nov-22, over YTD Nov-21. The Indian consumers are realising the benefits of switching over to EVs and as a result, currently we see a 4 percent penetration of electric scooters, as against the 1 percent penetration last year. The positive consumer sentiments have also seen an increase in the number of OEMs selling electric 2 wheelers from 44 as of March ’22 to 97 as of Nov ’22,” company’s spokesperson  from Greaves Electric Mobility told CNBC-TV18.com.
Here are some cars and two-wheelers that will definitely hit the roads next year.
2023 is set to be packed with new electric vehicle launches. For the first time at least 30 pure EV companies will showcase their products at the Auto Expo in January along with electric vehicles from established OEMs.
Tata Motors has launched the Rs 10 lakh Tigor.EV, which will begin sales in January. According to reports, you could see the Altroz and the Punch in electric avatars as well.
Hyundai will be launching the premium electric car the IONIQ5, which is based on the same platform as the Kia EV6. Hyundai's this new EV will give you a range of 631 kilometres and could be priced around Rs 50 lakhs.
MG Motor, once a chunk of the mass market EV segment, will be launching the Air EV. The company claims that this compact vehicle is most suitable for intra-city travel and gives you a range of 200 to 300 kilometres will be the smallest electric car in India.  MG Air EV will be priced between Rs 10 to 15 lakhs.
Read Here: The insurance coverage and cost for EVs differs from fueled vehicles — here's why
Mahindra and Mahindra's EV offering XUV400 will also be commercially launched in January. Promising a range of more than 450 kilometres, this electrified EV is likely to be priced at around Rs 15 to 20 lakhs.
French carmaker Citroen will be launching its electric hatch eC3 to compete with Tatas' Tigor.EV and Tiago.EV. This hatchback will offer a driving range of at least 300 kilometres and could be priced between Rs 10 to 12 lakhs.
In the two-wheeler space, you can expect Bajaj Auto to launch multiple products two EVs, one for micro-mobility, and one for the B2B segment for Bajaj-backed Yulu and more than one new scooter under the Chetak brand.
Ather 450 X upgrade will be launched in January and an all-new e-scooter from the company can be expected in August-September next year.
Bharat Forge-backed Tork Motors will be launching a facelift of the Kratos in January, followed by one new electric motorcycle platform in the upcoming year.
The world's largest two-wheeler manufacturer Hero MotoCorp will focus on expanding sales of the Vida V1 Pro and the Vida V1 Plus to more cities. But we do hear the company will launch at least one new electric scooter under the Vida brand in 2023.
Read Here: Buying electric vehicle can help save income tax — here's how
What's in for the EV industry in 2023?
Overall in 2023, EV makers will be increasing volumes and launching new products. According to industry estimates, the market share of electric two-wheelers could go up from 15 percent to 25 percent next year.
"We can foresee the future of Vehicle mobility being Electric and E-mobility being one the most popular automotive trends in 2023. I believe there is no electric vehicle revolution without EV charging. So these are key trends in the EV space to look forward to in the EV space; Plug & charge, Smart EV Charging , Parallel Charging, Battery Chemistry & technology, Swappable Batteries, Non Swappable batteries, A shift to renewable energy. We will also see a transition in EV getting fueled by Hydrogen Cells,"  Pankaj Gupta, CEO- Mufin Green Finance told CNBC-TV18.com
The market share of electric cars could go up from 1.4 to 3 percent that is from 50,000 electric cars in annual volumes this year to 1.2 lakh cars. Pricing pressures could impact the growth of the sector, battery costs have been going up by 7 to 8 percent and are currently around $160 per kilowatt hour. This could impact sales, any COVID disruptions in China may also impact production and prices.
Also read: Electric 2-wheeler sales hit all-time high in Oct — here's company-wise breakup
(Edited by : Abhishek Jha)
Check out our in-depth Market Coverage, Business News & get real-time Stock Market Updates on CNBC-TV18. Also, Watch our channels CNBC-TV18, CNBC Awaaz and CNBC Bajar Live on-the-go!