Indian companies' quest for lithium could land them in Canada

Indian companies' quest for lithium could land them in Canada

India's Lithium-Ion battery market, which is currently sized at 2.6 Gigawatt hours (GWh), is projected to grow by a whopping 4.362 percent by the 2029-30 financial year.

Lithium is often referred to as the new oil – mainly because it is an important component used in batteries manufactured for electric vehicles. Lithium-ion batteries are used in electric vehicles (EVs), which are gaining traction thanks to the government's push for greener mobility.

India's competition regulator may make a big change to clear deals worth $1.3 billion

This has led to a growing ecosystem in India — from manufacturers EV components to EV makers forming a part of the supply chain. According to Institute for Energy Economics and Financial Analysis (IEEFA) and JMK Research & Analytics, India's Lithium-Ion battery market, which is currently sized at 2.6 gigawatt hours (GWh), is projected to grow by a whopping 4.362 percent by the 2029-30 financial year. 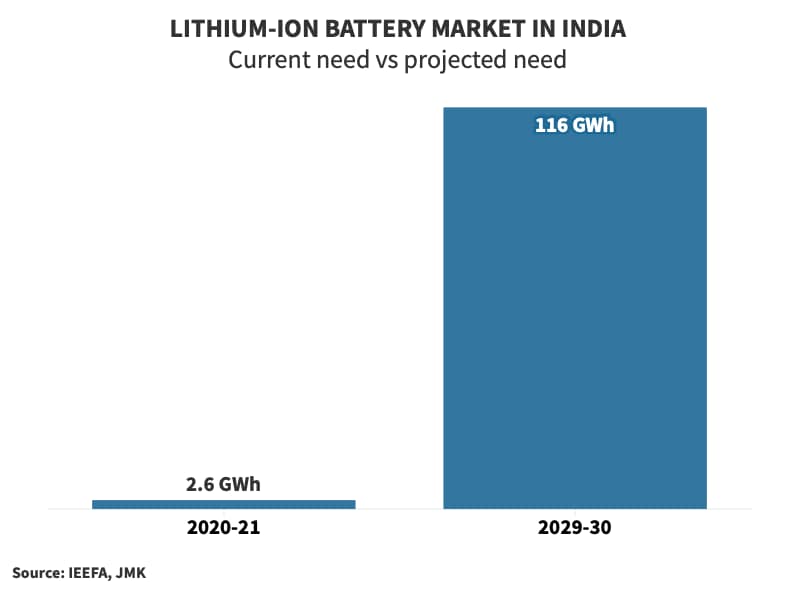 The joint report further stated that EVs account for 90 percent of the overall market for this battery demand. To meet India’s lithium needs, the government has been increasingly looking at other countries for the mineral. Lithium-ion batteries are also used in all manner of electronic devices, including laptops and smartphones.
Recently, India and Australia even agreed to jointly undertake due diligence on lithium and cobalt (a key component in Li-ion batteries) mineral assets in Australia. At present, based on a commissioned study and selection criteria, India has shortlisted source countries like Australia, Argentina, Bolivia, Chile etc to explore the possibilities of mineral asset acquisition abroad.
INDIA’S LITHIUM EXPLORATION QUEST
(Source: Government data)
As per the reserves identified, Bolivia, Argentina, Chile, and the United States have over 10 million tonnes of lithium resources. India, like other countries, would prefer to go to countries with large reserves but if there are some mutual benefits then India may explore other countries with some amount of reserves too, government sources said. 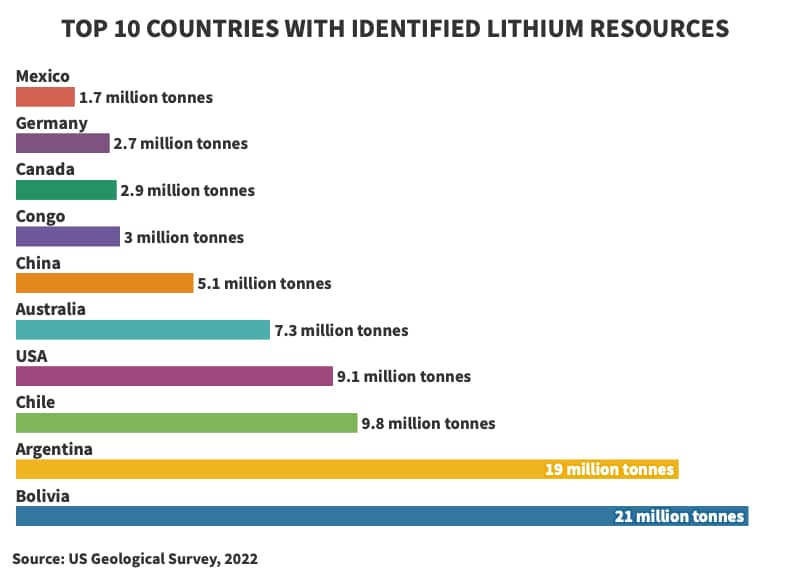 Sources told CNBC-TV18 that a couple of Indian mining companies are in talks with Canada to mine lithium and manufacture batteries in Canada. At first, the plan could be to address Canada’s needs. Despite having 2.9 million tonnes of lithium resources, Canada has not been able to tap into the reserves.
Meanwhile, in April 2022, Avalon Advanced Materials signed a binding letter of intent with RenJoules International, an Essar Company (Essar), to become a strategic partner and co-developer in support of Avalon's plans to establish a regional lithium battery materials supply chain to serve the needs of future EV and battery manufacturers in Ontario and elsewhere. Avalon and Essar established a new subsidiary, Avalon Lithium.
For Canada alone, the lithium demand is projected to increase by 500 percent by 2050 due to the growing domestic battery manufacturing and future-oriented transportation ecosystem. Canada’s;Lithium imports totalled $161 million in 2020, up from $149 million in 2019.

At present, Canada has been engaging with India to see if both countries can actively indulge in research and development jointly in the EV space.
It needs to be noted that Canada plans to invest $13.5 million to expand natural resource ties with Indo-Pacific partners — in trade, investment, and science, technology and innovation, under its latest Indo-Pacific Strategy.
Meanwhile, the Indian government approved a Production-Linked Incentive (PLI) scheme for manufacturing advanced chemistry cell (ACC) batteries at an estimated outlay of Rs 18,100 crore (around $2 billion). According to management consulting firm Arthur D Little, India needs to invest about $10 billion to boost cell manufacturing and raw material-refining to meet domestic demand for lithium-ion batteries for electric vehicles by 2030 — four times the current investment.
Also read: Ather Energy announces expansion in Tamil Nadu, plans to set up 150 power grids in state
According to officials, India is even looking for lithium reserves in its territory. In 2021, the Department of Atomic Energy discovered the country’s first lithium reserve of 1,600 tonnes in Mandya, Karnataka. As of January 2022, research is on at 20 different sites across the country to discover more reserves.
Meanwhile, the Union Mines Ministry formed a joint venture (JV) company Khanij Bidesh India (KABIL) — with National Aluminium Company (NALCO), Hindustan Copper (HCL) and Mineral Exploration Corporation (MECL) — for identification, acquisition, exploration, development, mining, and processing of strategic minerals overseas especially, lithium. 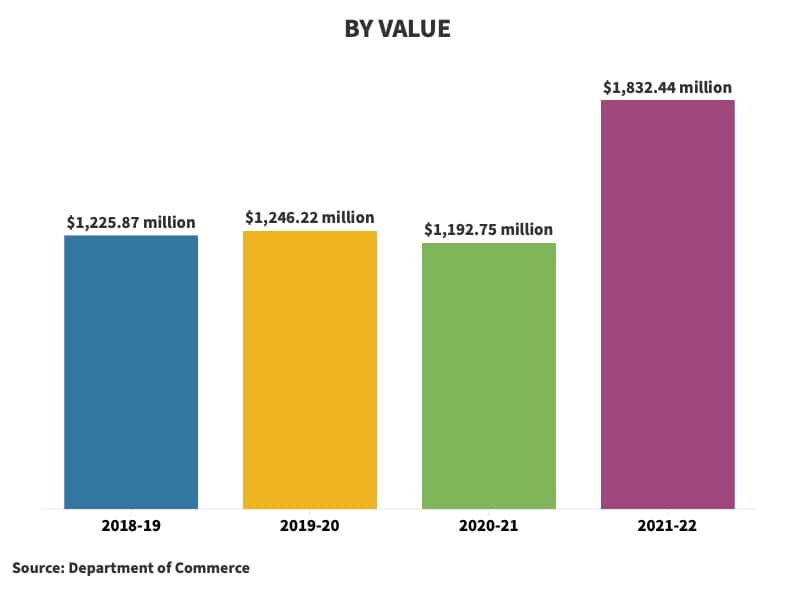 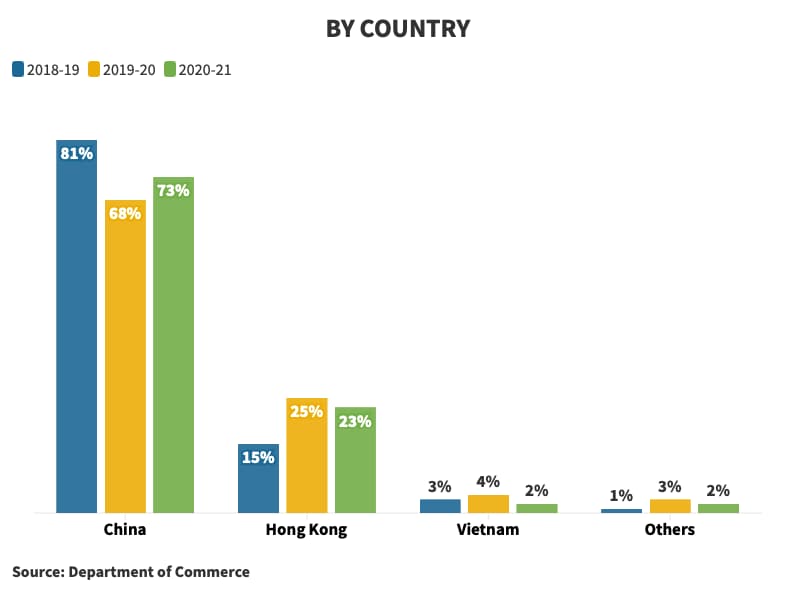 At present India's Lithium needs are largely addressed by China, followed by Hong Kong — which consists of over 90 percent of lithium-ion imports. According to a report, India has to increasingly diversify its lithium imports in the long run to support its EV plans.
Also read: Exports revival will start from fourth quarter, says Steel Strips Wheels
(Edited by : Vijay Anand)
Check out our in-depth Market Coverage, Business News & get real-time Stock Market Updates on CNBC-TV18. Also, Watch our channels CNBC-TV18, CNBC Awaaz and CNBC Bajar Live on-the-go!