Why these affordable hatchbacks are available on huge discounts

Updated : August 06, 2018 04:23:12 IST
The numero uno position in sales for Alto has been taken by Dzire and Swift.
The car is currently available at an effective discount of around 55,000 which includes cash discount as well as exchange bonus.

India is known for being an attractive destination for affordable and low cost cars. At a time when premium hatchbacks have huge waiting periods, affordable cars are running at a huge discounts.

Let’s have a look at the discounts available on these cars due to various factors, with decline in sales being the main reason:

Maruti's “India Ki Pehli Sawari” seems to be losing its sheen. The numero uno position in sales for Alto has been taken by Dzire and Swift. The car is currently available at an effective discount of around 55,000 which includes cash discount as well as exchange bonus.

WagonR has always remained in the top 5 selling cars of the country. However, despite that, the sales for the car have declined with other more expensive cars taking over the “Tall Boy”.

Celerio made its impact felt with the first ever AMT car in the country. But with soon others picking the trend, sales of Celerio went down.

Both these cars currently are running at discount levels of Rs 60-65,000. 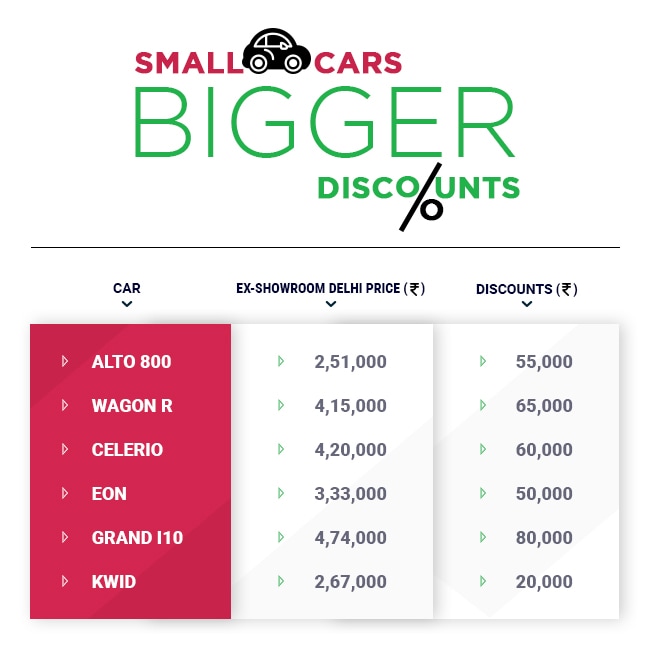 Hyundai Eon is the cheapest car from the Hyundai stable. With the company not upgrading the car for a while now, the sales have seen a downward trend. Precisely why the discount levels on the car are as high as Rs 50,000.

This is an unexpected entry in this list. Grandi10 continues to deliver volumes for the Korean car maker. Grand i10 has remained as one of the top 10 cars from a long time. The car maker is currently giving an effective discount of around 80,000.

Even though Kwid has not entered the 20 percent discount regime like most of the car makers, it did suffer from decreasing sales in the segment. The car once clocking above 10,000 sales is now down to below 5000 sales.