Updated : November 23, 2018 12:36 PM IST
India has a shot at becoming a digital hub for automotive R&D services globally.
But the highly profitable sector is unlikely to spawn new innovative companies from India.

I recently asked a venture capital investor in India why he hasn’t looked at an industry, which is at the beginning of an innovation cycle, and is still yielding 35 percent gross profit margins because global customers are spending to survive! We were talking about ‘engineering R&D services’, whose exports from India clocked $24 billion last year.

“Anything that is offshore services is no longer an investable area for us,” replied Sudhir Sethi, founder and chairman of Chiratae Ventures in Bengaluru.

“Design and engineering services went away eight years ago. A firm is developing solutions for somebody else. So, growth patterns are arithmetic—not geometric. We now look for IP (intellectual property) assets,” he explained.

There is a more obvious reason to strengthen his point: the competitive landscape. More than 1,000 multinationals have their software development centres in India, referred to as GICs (global in-house centers). Each of these helps their mothership carry out engineering R&D (ERD) programmes at a lower cost out of India.

Even a decade ago, homegrown firms like SmartPlay and publicly-listed companies like Cyient and KPIT were in the ERD reckoning. Is the run over for entrants? According to trade body Nasscom, there is hope in the automotive sector. Global automakers are upping their R&D budgets to compete with the Teslas and Ubers of the world. They count shared mobility, digital services and new technology/ software as priority areas, with collective ERD spends likely to touch $225 billion by 2022.

Automotive already contributes 26 percent, or $6.2 billion, of the ERD exports from India. But it is highly competitive even among the local pack because of large IT companies such as Tata Consultancy Services (TCS), HCL Technologies, and TechMahindra. The top-tier IT companies are helping auto and manufacturing clients in converging mechanical and electrical technologies with electronics and software.

“If you are buying a car today, you’re paying a lot for software in it than the mechanical parts you see,” Ratnaparkhe said. “The sharing economy is possible when the systems are intelligent, connected and autonomous.”

Entrepreneurs or external service providers (ESPs) have the opportunity to innovate, as global automakers begin to invest in areas like connected and self-driving technologies, electric vehicle programmes, and the sharing economy. As Sethi said, it has to be IP assets: so, products or apps in areas like motion sensor and telematics for autonomous driving projects, and cybersecurity for connected technologies need to be built from India. The Scope Is Getting Bigger

The ability to generate 35-40 percent gross margins was in no small measure because of the availability of skilled engineers—people in numbers. “Typically, an ERD project first comes at a modest margin,” said a former GIC head, on the condition of anonymity because he isn’t authorised to speak to the media. “But as we scaled up to the full vehicle program, and brought more work offshore, the margin would sweeten as we put more people to solve the problem. Now, it has become about building IP-based solutions to help customers meet defined outcomes.”

Traditional models accounted for 98 percent of revenue, which dropped to 82 percent last year, and is expected to decline to 72 percent by 2022, according to the Nasscom ERD report. That’s good news for India, the leader in offshore R&D services, now vying to become a digital hub. 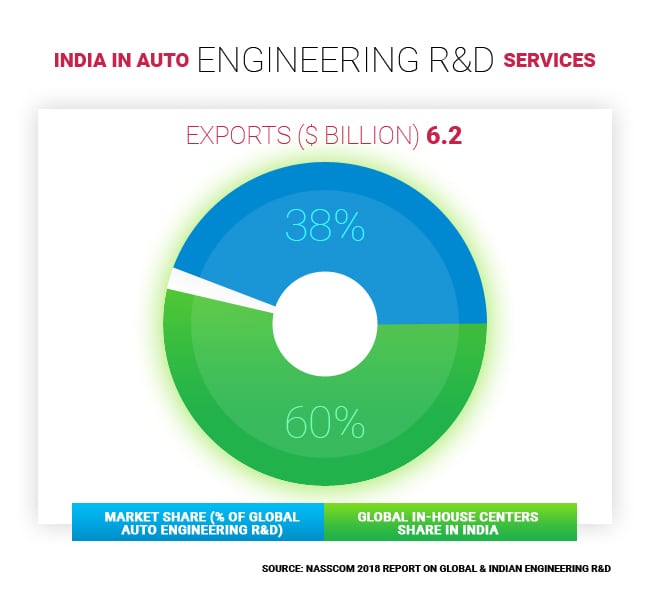 Kunal Talgeri is a journalist based in Bengaluru.