Retail vehicle sales grew 26% when compared to the corresponding period a year ago as per data from the Automobile Dealers Associations. Two-wheeler sales, however, remain a worry.

November was a month of rejoicing for automakers in India as the total vehicle retail sales grew 26 percent and came to 23, 80, 465 units as compared to being at 18,93,647 units in the corresponding period a year ago.

View | Budget 2023: Hope sees the invisible and feels the intangible

According to data released by Automobile Dealers Associations (FADA) on Friday, the strong sales in October which were aided by the festival season were carried forward in November on the shoulders of the Great Indian wedding season.
Data by the Confederation of All India Traders (CAIT) corroborates this. As many as 32 lakh weddings are expected to be solemnised between November 14 till December 14.
Also read: Are big fat Indian weddings back? Vendors rejoice as post-pandemic sales soar even as inflation pinches
“November 2022 has clocked the highest retails in the history of the Indian Automobile Industry with March 2020 as an exception when retails were higher due to BS-4 to BS-6 transition,” said Manish Raj Singhania, FADA President. 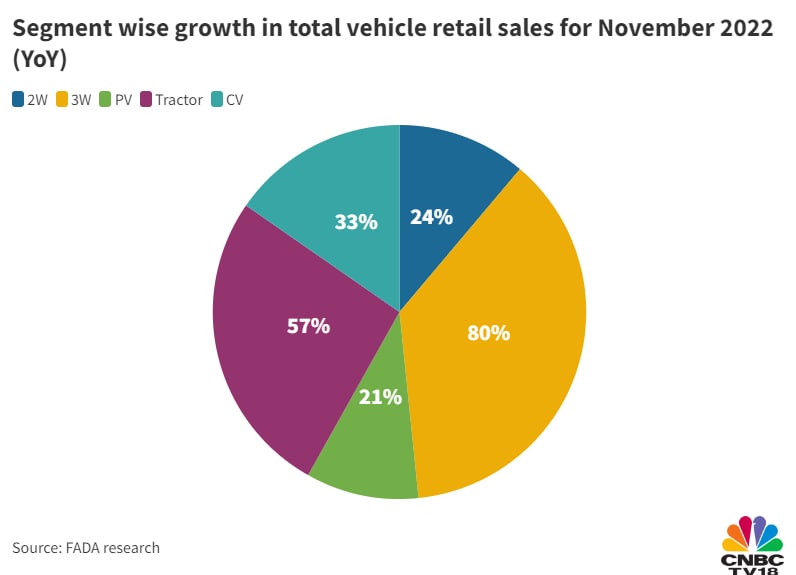 When compared to the number of vehicle retail sales in October the number in November saw a growth of 13 percent. When compared to 2019 the pre-pandemic time overall retail sales grew 1.5 percent in November 2022.
Two-wheelers fail to ride the party
Two-wheeler (2W) sales however did not see a similar pickup. In fact, November sales saw a marginal dip of 0.9 percent when compared to last year.
Market analysts too have not been bullish on two-wheeler stocks in recent times. Krishna Kumar Karwa of Emkay Global today told CNBC-TV18 that he was not bullish on the two-wheeler segment because he was unsure of the demand itself picking up.
Apart from the two-wheeler blip though, all the other categories - three-wheelers (3W), Personal Vehicle (PV), Tractor and Commercial Vehicle (CV) - grew by 4 percent, 5 percent, 61 percent and 6 percent respectively. 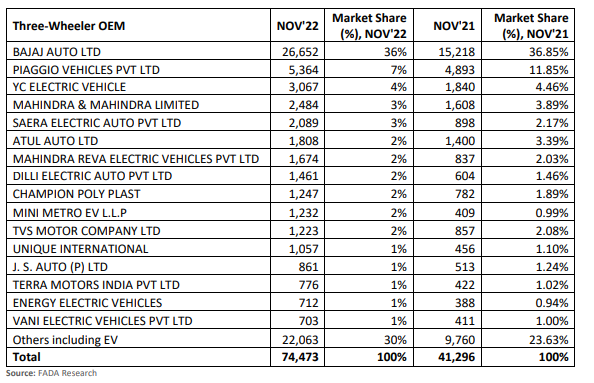 According to data by FADA, better model launches and an increase in rural demand have aided the PV segment to recover from the losses during the pandemic. The compact SUV and SUV category coupled with higher variant models continues to rule.
Meanwhile, the CV sales witnessed are going on strongly supported by the Government’s continued focus on the infrastructure space and new mining projects.
“Replacement demand continued to pour in along with healthy inter-state passenger movement enabling bus sales,” said Singhania.
What will benefit and what will be the challenges
According to data released by the Reserve Bank of India (RBI) in its September 2022 consumer confidence survey, most households in India reported higher spending levels, mainly due to an increase in essential item prices, and expect these levels to rise further over the next year. The FADA report also expects this to keep on aiding the auto sales.
Apart from that spending cycle in rural India is expected to increase after the harvest season.
As OEMs are gearing up for price hikes going forward, discounts for the slow-moving products to clear the year-end stocks are expected to make the year-end sales look healthy, FADA pointed out.
Although the 35 basis points repo rate hike by RBI which was announced on December 7 can hinder the growth according to FADA as the loans will become expensive.
Price hikes by OEMs may dent consumer confidence, especially in 2W and entry-level PV segment. Semiconductors supply can also be an issue due to increasing Covid-19 cases and lockdowns in China, the report read.
Also read: Nov auto sales: Car sales sees a record high, 2-wheeler wholesale still lower than retail numbers — see how auto firms fared
(Edited by : Abhishek Jha)
Check out our in-depth Market Coverage, Business News & get real-time Stock Market Updates on CNBC-TV18. Also, Watch our channels CNBC-TV18, CNBC Awaaz and CNBC Bajar Live on-the-go!