Renting a cab versus owning a car: It is more than just numbers

Renting a cab versus owning a car: It is more than just numbers

You might have seen forwards on WhatsApp and other social media in the form of an analysis, where the comparative cost of hiring a cab versus buying a car is shown, with the conclusion that renting a cab makes more sense. Personal finance strategist Rishabh Parakh helps us understand the calculations.

Renting versus buying is a very common debate these days, especially after the emergence of Ola and Uber. You might have seen forwards on WhatsApp and other social media in the form of an analysis, where the comparative cost of hiring a cab versus buying a car is shown, with the conclusion that renting a cab makes more sense. Let me help you understand this calculation. So, here is a sample calculation that I recently came across which is widely circulated across social media. 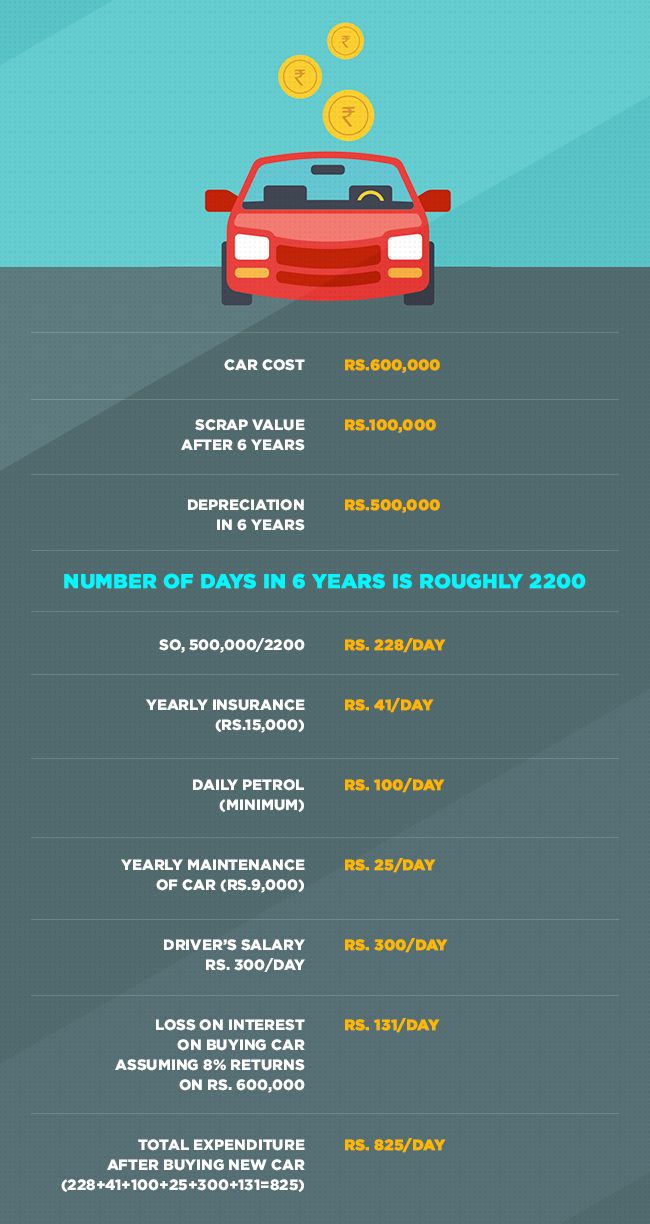 The first point to be noted here is that nothing is right or wrong about any decision, be it financial or otherwise, provided you have factored in all the aspects. Let’s consider the pros and cons of hiring a cab versus renting a car.
As far as the pros are concerned, we have already seen the analysis above. If we look at this working only from the point of view of numbers, then there is nothing wrong. However, there are other factors to consider that do not come out through numbers. This analysis is done in isolation.
Let’s look at the other side of the story
First, let’s talk about the assumption of spending Rs 100/day on petrol. Let’s say the said car gives a good average of 20 km/litre, which results in a rough daily usage of around 25 km given the current petrol prices. Now, this Rs 100/day may or may not be true because the distances in metro cities between your office and your house could be far more than this. What about going out with your family for long distance, maybe a couple of times a year? If both of these hold true, then the number of kilometres will be more, and taking a cab for longer distances will make it a more expensive affair.
Even if you don’t seek the aspirational value from owning a car, having a car brings lots of convenience. The mathematical calculation has not factored in a medical emergency. What if you encounter one? Can you depend on a cab at such times? What if there was an important client meeting or an interview that you needed to attend which you missed because you could not get a cab? Can you quantify the loss in such a case? Someone might say that they do not face such situations in terms of client meetings, or that they can borrow a neighbours’ car for a medical emergency if required. That’s fine, as long as these factors are being accounted for in your decision.
Similarly, it is difficult to get a cab if you have to go somewhere close by. During rains and also peak hours or festive times, cab companies suddenly think that the users have become rich and put surge pricing in place, which adds to the expense. Most of the time, you won't even get a cab for travelling to a nearby place.
What about security issues, or problems with unclean cabs? There are arbitrary cancellations from drivers as well at times.
One more factor to consider is the driver’s salary. Someone owning a car worth Rs 6 lakh is unlikely to hire a driver. That cost doesn’t need to be added in the calculation.
Now, if we look at owning a car from these angles, it suddenly make great sense to own one. There are people who would be okay to compromise on these issues and prefer to use a cab to save on purchase and maintenance costs, while there are many who might not be ready to make these compromises.
As far as my personal perspective is considered, I believe it’s good to have a basic car if you can afford it because life decisions can’t be made only keeping math and numbers in mind. Other factors including emotions and convenience as mentioned above need to be considered as well. A good balance can be to buy a basic car to serve these needs, while still using a cab as and when required. But as said before, there is no right and wrong about renting v/s buying decision, and everything is fine as long as you are making a thoughtful and informed decision on the basis of comprehensive financial planning. The key is to focus on making and growing money rather than worrying about spending or cutting down on your expenses, which is not possible beyond a point. So, look at things holistically and not in isolation, and without depending on what others are saying. Decide what suits you best.
Rishabh Parakh is a personal finance strategist and Chief Gardener of Money Plant Consultancy, an established firm providing tax and wealth management services across Maharashtra, Singapore and the UK.
Check out our in-depth Market Coverage, Business News & get real-time Stock Market Updates on CNBC-TV18. Also, Watch our channels CNBC-TV18, CNBC Awaaz and CNBC Bajar Live on-the-go!