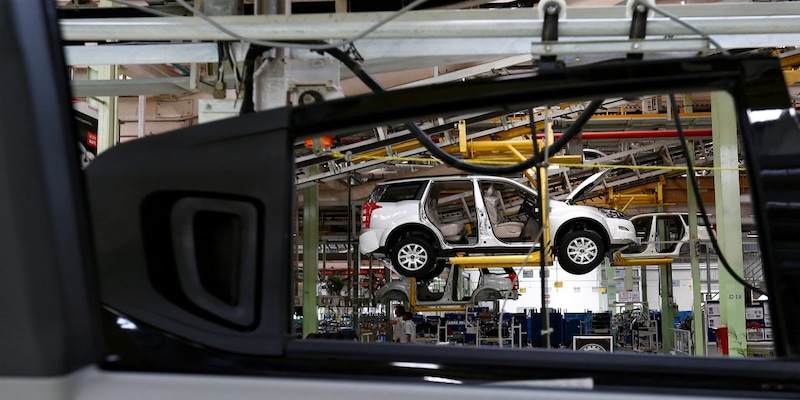 Mahindra & Mahindra, which manufactures commercial vehicles, passenger vehicles and farm equipment, will not be able to restart operations at its automotive factories from next week, sources in the know have told CNBC-TV18.

Even as the Ministry of Home Affairs has offered relaxation to certain industries to resume operations from April 20 in a phased manner, most automakers cite multiple operational challenges and will be unable to do so.

Mahindra & Mahindra, which manufactures commercial vehicles, passenger vehicles and farm equipment, will not be able to restart operations at its automotive factories from next week, sources in the know have told CNBC-TV18.
While the company's automotive plants have not been permitted to restart operations yet, its tractor division does have permission to resume operations by the company, but many of these plants lie in containment zones.
Only two of the company's seven plants in the country lie outside of containment areas and can be opened for operation next week.
However, sources told CNBC-TV18 that resuming production in these locations will be a function of the availability of supplies. The company, sources say, will need to evaluate its supplies and the status of its suppliers before full-scale operations can begin.
Automakers have been engaging with their district administrations to seek clarity on how and under what restrictions can production be restarted. However, since auto dealerships will not be allowed to open vehicle showrooms until after May 3, OEMs will find it imprudent to manufacture vehicles only to store them in factories and block cash flow.
Many vendors supplying components to OEMs have also had to shutter operations over the past month, and a significant number fall in red or orange zones.
Another important challenge that OEMs are addressing is to adhere to MHA norms which say that factory staff must be housed either in or adjacent to the premises. Additionally, many blue collar and white collar workers also reside in or around containment zones, and hence, will be unable to commute to and from the factory location.
Mahindra and Mahindra's Farm Equipment Sector has factories in Zaheerabad, Nagpur, Rudrapur, Jaipur, Rajkot and Mohali.
The three locations where M&M's automotive division holds operations are a Greenfield facility in Chakan in Pune, Zaheerabad in Telangana and Haridwar in Uttarakhand, in addition to its facilities in Nashik and Kandivali in Maharashtra.
Check out our in-depth Market Coverage, Business News & get real-time Stock Market Updates on CNBC-TV18. Also, Watch our channels CNBC-TV18, CNBC Awaaz and CNBC Bajar Live on-the-go!