BOTTOMLINE: Motherson Sumi is a success story, but a chequered one at that

Updated : August 17, 2020 11:27 AM IST
Whether money invested in the other businesses could have been better deployed is not the only concern;  more worrying is the way the businesses are structured.

After a strong run of many years, the Motherson group stands at the cusp of a reorganization, which threatens to expose some of the chinks in its armour.

The story of Motherson Sumi Systems--the $9 billion India listed company of the $11.3 billion Motherson group--is one of grit and determination. These qualities have transformed the company from a supplier of wiring harnesses for the Maruti 800 in 1983, to a global tier-1 supplier to the best automobile brands in the world, including the likes of Daimler, Audi, Volkswagen, Renault and, of course, Maruti Suzuki.

Today, the company operates over 270 facilities across 41 countries, boasts 33 joint ventures with marquee names, employs over 135,000 people and supplies lighting systems, shock absorbers, moulds & toolings and sheet metals, besides wiring harnesses. Shareholders too have had a good run with Rs 2500 invested in the company’s IPO in 1993 now worth Rs 40 lakh.

Behind its startling 3200-fold growth in revenues—a heady ~35 percent compounded growth—has been a strategy of stitching suitable alliances and acquiring productive assets across the globe. In fact, the company itself is a joint venture between the Sehgal family (and controlled entities—36.4 percent stake) and Sumitomo Wiring Systems (25.1 percent). In fact, the proposed reorganization of businesses that will see the domestic wiring harness (DWH) operations separated into a separate (demerged) entity, Motherson Sumi Wiring India, is being undertaken at the behest of Sumitomo, which wants to exit the other, larger businesses. And this, more than anything else, draws attention to Motherson’s “other” businesses.

While the growth in revenues for Motherson has been remarkable, the pace of growth in the company’s profits and operating cash flows have lagged significantly. In fact, the company hasn’t generated free cash flows in 5 out of the past 10 years. While a lot of its money has been deployed towards capex, the results from such investments haven’t been very impressive. Note this: while revenues have grown about 189 times for the company since 2002, net profits have risen less than 117 times, the company’s investments in plant and machinery (gross block) have increased 118 times but operating cash flows have grown less than 77 times. And that’s the worry. 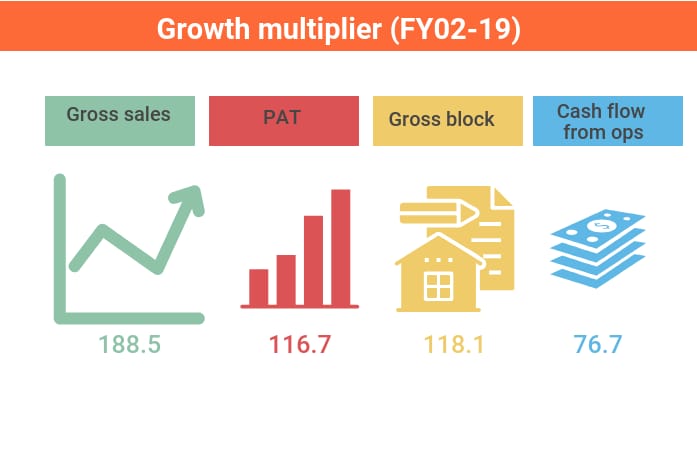 In fact, if you strip away the standalone performance of Motherson Sumi Systems, the picture looks even more concerning. Of the company’s over Rs 63,000 crore revenues in the fiscal ended March 2020 (FY20), about Rs 57,000 crore accrued from other businesses in which over Rs 22,000 crore has been invested since 2002. But the other businesses contributed only Rs 950 crore to the total consolidated profit before tax of about Rs 2,100 crore for FY20. The debt-equity ratio for these other businesses also stood at ~2.7x (for FY19) compared to a consolidated 1.1x and a standalone 0.2x.

And the cumulative free cash flow generation of the large other businesses from 2002 till 2019 has been a negative Rs 1500 crore plus compared to over Rs 3,600 crore of positive flows for the standalone business.

The number for other businesses turns positive if you include FY20, but given the company’s volatile performance on this front, predicting this to be the start of positive flows in the future requires a leap of faith. It also poses the question not everyone is willing to ask: has the money pumped into other businesses all these years, which has driven revenue growth, been really worth it?

Whether money invested in the other businesses could have been better deployed is not the only concern;  more worrying is the way the businesses are structured. Not many would know that SMRP BV, the entity that controls much of the other businesses, is owned 51 percent by Motherson with the remaining 49 percent being held by Sehgal family-controlled entity, SAMIL?

So, if you disregard the accounting norms for consolidation and slice the business into near half, to reflect the shareholder interests, the claim to revenues and profits before tax for Motherson’s shareholders would drop to about Rs 28,500 crore and Rs 475 crore, respectively. And this, after leveraging the balance sheet and cash flows of Motherson Sumi to grow the business.

What adds to this discomfort is the proposed reorganization plan, which shall see the Sehgal family acquiring a controlling 50.4 percent stake in the entity that will house all the non-domestic wiring harness businesses, as well as SAMIL’s business post-merger (See: The Reorganisation Plan charts below). 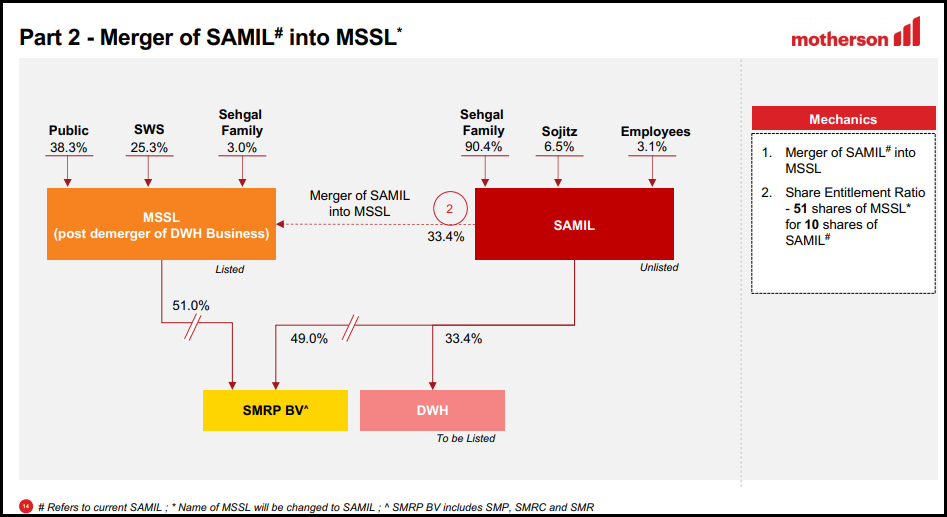 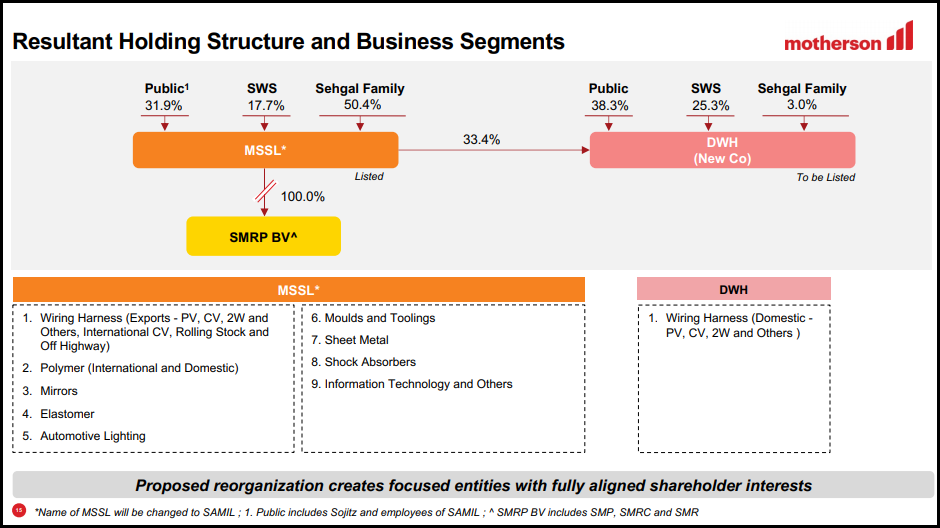 For more details of the presentation by the company on its restructuring plan, click here:

The point of contention here is the valuation, which magically results in a ratio that offers controlling interest to the promoters. A closer look at the financials shared by the company in a recent presentation reveals that, but for its share of profits in what seems like mostly SMRP BV, the company had incurred a loss in FY20 (EBIT of Rs 32 crore).

And if we consider earnings per share (EPS) as a basis for valuation, the ratio of Motherson’s standalone EPS of Rs 1.88 when compared to SAMIL’s consolidated EPS of Rs 5.93 (including SMRP BV equity share of profits) implies a swap ratio of 3 shares of Motherson for every one of SAMIL for a merger.

However, the independent valuers have accorded a higher valuation to SAMIL leading to a less favourable 5.1 ratio for the swap. 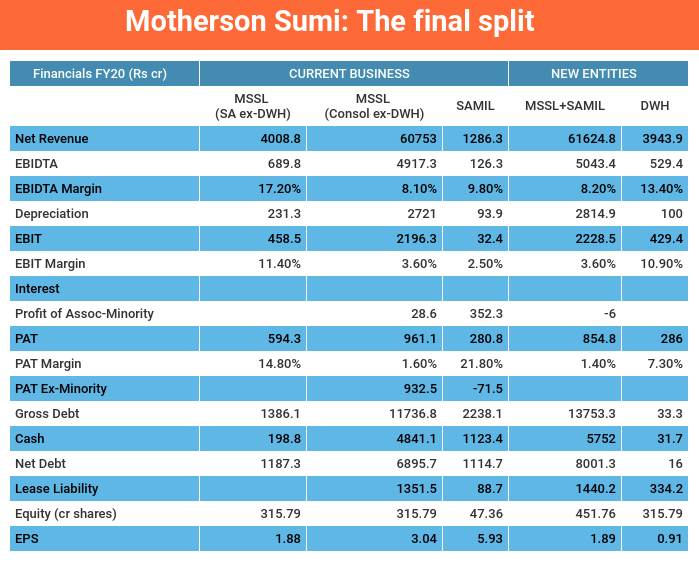 What’s also a ticklish issue is that post-merger, there will be sourcing and shared services agreements between the two listed entities to “address existing interdependencies”, which the management assures will be “on an arms-length basis”. There is also an innocuous statement in the company’s presentation “MSSL retains exposure to the fast-growing India auto market and share of cash flow”, which can be read into in many ways.

To cut a long story short, the reorganization plan has some pluses, some minuses and grey areas, but if I were to take a call on investing in either of the two businesses, I’d root for domestic wire harnessing, which is the cash generator.  The bigger question, however, is should you remain invested. Here, as always I prefer looking at the spectrum of other opportunities. As an indication, we picked a sampling of other auto component players, auto OEs and IT services companies—high cash generating engines. And it appears that if you were to look at just trading multiples based on expected FY22 earnings, two-wheeler leaders Bajaj Auto and Hero Motocorp and tech giants Infosys and HCL Technologies clearly look less pricey. So, why settle. 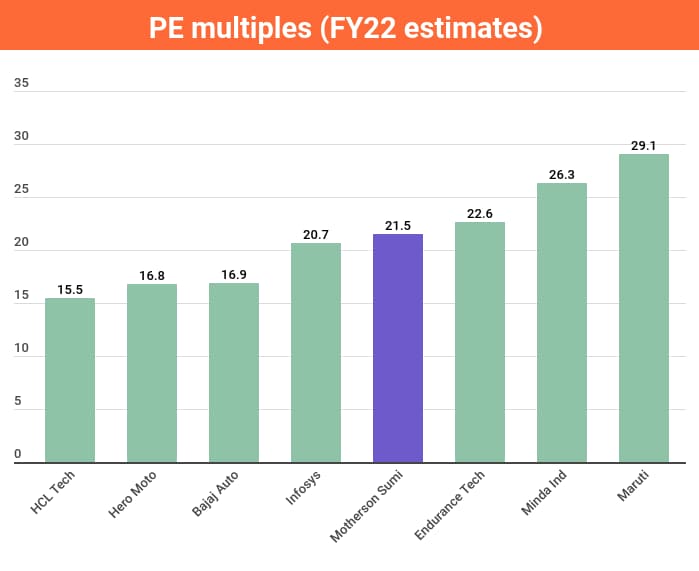