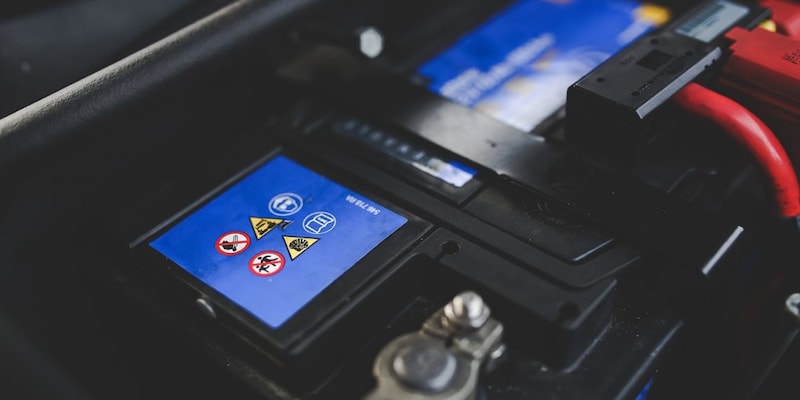 The ongoing COVID-19 crisis, the decline in the auto OEM and telecom segments, and weakness in the overall economy have led to a first revenue decline for the battery industry in FY20 in the last 20 years.

The ongoing COVID-19 crisis, the decline in the auto OEM and telecom segments, and weakness in the overall economy have led to a first revenue decline for the battery industry in FY20 in the last 20 years.

The two major battery players, Exide Industries and Amara Raja Batteries have seen their revenue hurting by loss of sales due to the lockdown in the latter half of March 2020.
The revenue decline may continue in FY21, given 2-3 months of lockdown in the early part of the year. But, this decline has been mostly captured in Q1FY21, according to IIFL Securities.
“Battery industry revenue (using Exide + Amara Raja, as a proxy) had not declined even once in the past 20 years. About 40-50% of revenue comes from the auto aftermarket segment, which is driven by growth in vehicle population. Vehicle population has continued to grow, even in years of weak OE sales. As a result, overall revenue growth has stayed resilient, even during times of an OE slowdown,” IIFL Securities noted.
But, FY20 marked a departure from the norm, with a sharp decline in revenues of these companies for the first time in 20 years. Although, the management of these companies expect to register a surge in replacement demand in the immediate near-term, given that replacement of old/discharged batteries cannot be postponed. 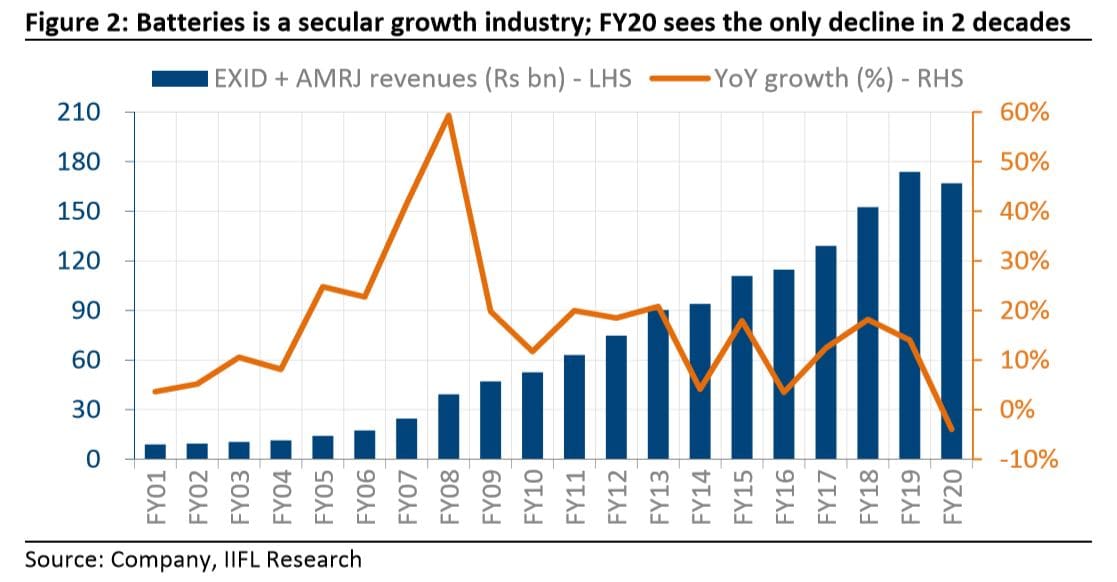 Amara Raja Batteries management also mentioned that the Telecom segment is seeing green shoots of recovery after years of considerable turmoil. As a result, industrial batteries used in Telecom and data centres are expected to register a healthy growth this year.
Further, vehicle sales reported by auto OEMs have largely normalized which bodes well for battery players.
However, the year also witnessed a margin expansion and cut in the corporate tax rate.
Industry Ebitda margin has been in the 13-18 percent range over the past two decades. The only exception was FY10, where margins spiked to 22 percent, following a sharp fall in lead price during the global financial crisis. Industry margins were at the low-end of the 13-18 percentage range in FY19. Despite revenue decline, industry margin improved YoY in FY20, the brokerage said. IIFL Securities notes that both companies have made early moves into Lithium-ion batteries, with assembly of battery packs. Volumes may be small to start with. The early start means that by the time demand picks up, they would be ready with manufacturing capability.
Further, Exide has, over the years, generated high gross margin compared to Amara Raja. This is partly due to the later’s trading business (batteries and Home UPS), which is inherently low margin. Both, Exide and Amara Raja have been in a high capex phase which has hurt cash flows and the return ratios.
However, Amara Raja has the advantage with respect to operating costs (main heads: employee costs, battery charging costs, warranty expense, etc). The shortfall in gross margin is more than made up for by Amara Raja, resulting in its clocking a much higher Ebitda margin of 220 bps than Exide Industries, the brokerage said.
IIFL Securities reiterated Buy recommendation on both companies as it believes that auto replacement demand may surprise positively in the coming quarters.
“Auto OEM and Telecom segments have largely normalised, while other industrial segments may also rebound, as the economy becomes fully functional. Exide is trading at 23% discount to Amara Raja. If Exide matches Amara Raja on growth, it may see a re-rating. Exide’s investment in Exide Life has been viewed negatively by the Street, but it is worth noting that Exide has infused cash into Exide Life only once (Rs 1 billion) in the past 5 years,” the brokerage said.
Check out our in-depth Market Coverage, Business News & get real-time Stock Market Updates on CNBC-TV18. Also, Watch our channels CNBC-TV18, CNBC Awaaz and CNBC Bajar Live on-the-go!