The sales by Bajaj Auto for the overseas market for the month of October came at 1.52 lakh units, down 31 percent from 2.21 lakh in October 2021.Rakesh Sharma, Executive Director, Bajaj Auto told CNBC-TV18 that it will take a couple of quarters before normalcy returns in export markets.

Bajaj Auto released its auto sales in October data today and the company saw a 10 percent decline in total sales which came to 3.95 lakh units as compared to 4.39 lakh units in the corresponding period a year ago. The company’s sales were primarily impacted by the decline in exports. 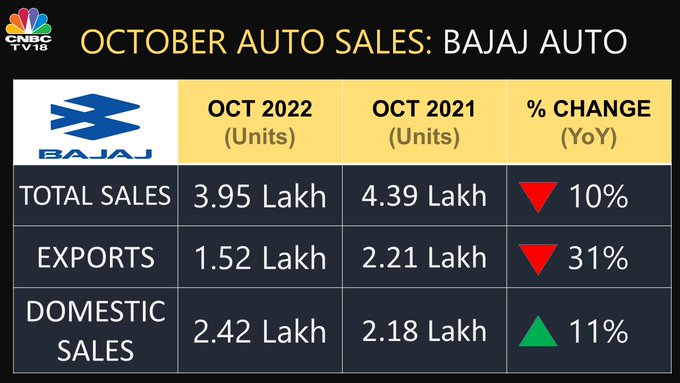 The sales by Bajaj Auto for the overseas market for the month of October came at 1.52 lakh units, down 31 percent from 2.21 lakh in October 2021.
Rakesh Sharma, Executive Director, Bajaj Auto told CNBC-TV18 that it will take a couple of quarters before normalcy returns in export markets.
Also read: October auto sales: M&M sold 54% more than last year — check details of other auto firms
“I guess, given that all these issues are the root cause of the macroeconomic environment, particularly the strengthening of the dollars and the lack of availability of currency, US dollars for international trade, I guess it will probably take another couple of quarters before normalcy starts to return. That has been our experience in the past when we've gone through these cycles,” said Sharma
He further added that the numbers show an increase every month hence markets are digesting the price increase which is taking place because of inflation. It is happening at a slower level but it shows that the market will soon return to normalcy. 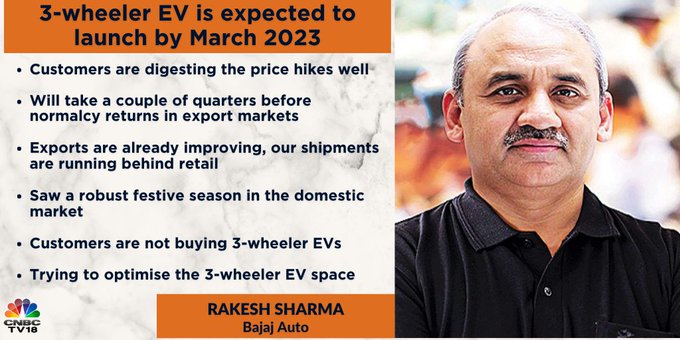 On a sequential basis, Bajaj Auto’s total sales rose 0.12 percent from 3,94,747 units sold in September 2022.
Even on the exports front Bajaj Auto did see growth as it sold 1.4 lakh units while in the month of October the number increased over 8 percent to 1,.52 lakh units.
“We took the big hits in the period of July and August, where we recalibrated our shipments to take into account the lower level of retail and reduce the stock in the channel and the exposure of our channel partners. So that hit has already been taken. Now actually our shipments are running behind retails. So I would say that every progressive one exports should see a rise over the previous month,” said Sharma.
He also added that the company is planning to launch three-wheeler electric vehicles by March 2023.
Also read: Auto sales surge in festive season but remain below pre-COVID levels
(Edited by : Nishtha Pandey)
Check out our in-depth Market Coverage, Business News & get real-time Stock Market Updates on CNBC-TV18. Also, Watch our channels CNBC-TV18, CNBC Awaaz and CNBC Bajar Live on-the-go!