This month Bajaj Auto not only saw a decline in exports but the domestic sales also declined standing at 1.52 lakh units, declining 4 percent on a yearly basis and 36 percent on a month-on-month basis.

Bajaj Auto's total sales for November 2022 declined 19.3 percent from the corresponding period a year ago, as per the monthly data released by the company. The company has attributed this to a sharp decline in exports. However, Rakesh Sharma, Executive Director of the two-wheeler giant believes that the export market should start picking pace soon and return back to the previous levels soon.

“Almost 50 percent of our sales are from overseas markets. From this, I would say about 60 percent of it is sort of soft right now, which is the Africa area. But we are hoping that as certainty comes around, it's all related to the dollar movements and what the Fed is announcing and the consequent impact on the currency, the devaluation and the availability of the dollar,” said Sharma. 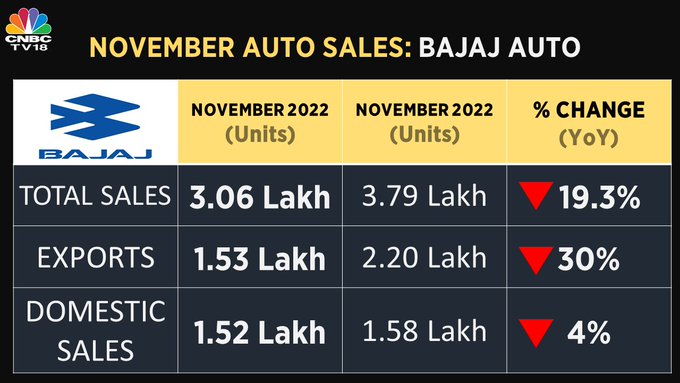 The company reported a decline of 30 percent in total exports. On a monthly basis, the automaker's total sales have declined 22 percent from 3.95 lakh units sold in October 2022.
Also read: Nov auto sales: TaMo, TVS see EV sales rise, Ashok Leyland clocks 39% growth — check monthly report card
November has been a tough month for Bajaj Auto as the decline was not only in exports but the domestic sales too fell four percent on a yearly basis and 36 percent on a month-on-month basis.
Bajaj Auto believes that the domestic muted growth can be attributed to the slowdown in rural markets.
“They've (rural market) not come back as rapidly as the urban markets have come. But what is ubiquitous is that the entry-level segment, whether it is in urban or semi-urban or rural, there has been a shift. What has really pulled the industry up is the 125CC, 150CC plus segment,” he added. 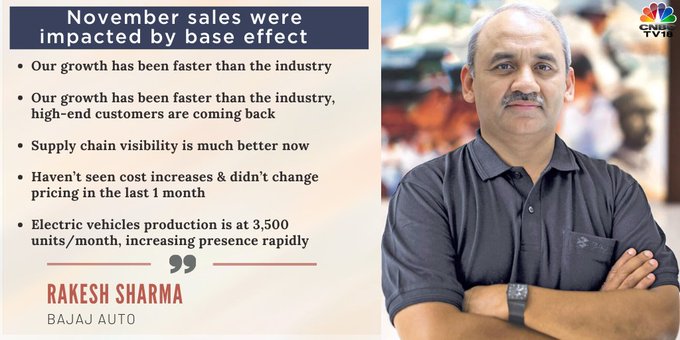 He further mentioned that there are no price hike plans currently.
“We took our price increases in the period of April, May, June, which is when we were seeing most of the raw material indices going up and we sort of evaluated our stand at that point of time and we were also seeing that there will be the big months of October and November coming along and we wanted to do our price increases before high volume months happen. So that we could get the benefit of that and recover the cost increases. As we stand now, we are not seeing cost increases,” he explained.
Also read: Bajaj Auto believes normalcy in exports will take a couple of quarters more
Although the overall sales for Bajaj Auto have been muted, the automaker is hopeful on the electric vehicle sector.
“We've already touched 3,500. Now that we have good supply chain visibility, we are launching an expansion drive to enter more and more cities. We are in 37 cities, hopefully, in the next three-four months we should be in around 80 cities and that should see a very significant increase in the sales of Chetak from January onwards,” he added.
Also read: Auto sales preview: Passenger vehicle sales in November to see a jump
(Edited by : Abhishek Jha)
Check out our in-depth Market Coverage, Business News & get real-time Stock Market Updates on CNBC-TV18. Also, Watch our channels CNBC-TV18, CNBC Awaaz and CNBC Bajar Live on-the-go!
Tags