Analysis: Is it end of the road for diesel in India after Maruti Suzuki’s decision to end diesel models?

Analysis: Is it end of the road for diesel in India after Maruti Suzuki’s decision to end diesel models?

While Maruti Suzuki’s plans are clear, it is to be seen how M&M responds to the BS-VI call, given it offers a diesel-only portfolio. It will be interesting to see the strategy that M&M crafts for itself to stay not just relevant, but also profitable in the medium to long term.

With India’s largest carmaker, Maruti Suzuki, which sells one of every second car in India, deciding to discontinue its diesel variants across all models from April 2020, a new paradigm in Motown has been set.

BS-VI fuel of 2020 is said to reduce the presence of sulphur to 10 parts per million compared to 50 ppm in the case of BS-IV fuels. Moreover, emission of particulate matter will come down by 80 percent and nitrogen oxide by 70 percent from diesel vehicles that are BS-VI compliant.
The additional cost of making diesel engines BS-VI compliant seems to be the bummer for Maruti Suzuki that saw the current generation of diesel cars contribute 23 percent to its sales volumes last fiscal.
The Strategic Framework
A hard decision to clamp down diesel cars may seem preposterous to a novice, but when looked through the prism of the age-old management framework of PESTEL analysis, it seems like the most logical one. 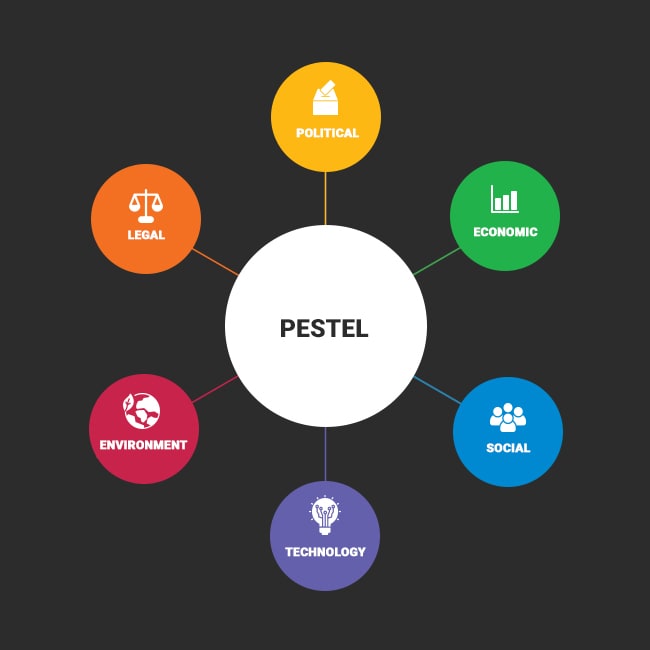 Strategists and business consultants often rely on the most basic and logical frameworks when crafting potential business decisions for the long-term. Let’s look at the Maruti Suzuki ‘diesel dilemma’ through this framework and see what it could mean for the industry at large.
Decoding the PESTEL analysis for Maruti Suzuki’s Diesel Dilemma
Political:
A business decision based on the government’s policy with respect to the business proposition, the switch from BS-IV to BS-VI, while skipping BS-V altogether borders the political and legal decision in the country that battles pollution woes. Diesel vehicles get negative points on P.
Economic:
The country is doing well, growing at over 7 percent per annum, high disposable income, young population willing to spend on cars, as shown from the growth of the automobile industry that grew at a CAGR of over 7 percent between FY13 and FY18. Maruti Suzuki itself sold 1.75 million vehicles in the last fiscal of while diesel cars were over 4 lakh units. From an economic-alone standpoint, you wouldn’t shutdown a vertical that gives you a quarter of your revenue. Diesel vehicles get positive points on E.
Social:
India is a highly price-sensitive market. When it comes to automobiles, the quintessential ‘kitna deti hai?’ will see many more cohorts before it escapes the Indian middle class – the most valued segment for Maruti Suzuki. With the life of diesel engines only 10 years as compared to 15 years for petrol and the price & efficiency differential only reducing between the two technologies, society will start seeing negative returns on its diesel-car investments. Pollution and its harmful impact on society doesn’t do well either. Diesel vehicles get highly negative points on S.
Technological:
The technology to filter out particulate matter and sulphur from diesel fuel emission exists, but the upgrade will cost upwards of Rs 80,000 per engine and could go well up to 200,000 rupees in bigger vehicles. Will the consumer pay the differential for a fuel that is no longer much cheaper than the alternative (parity of only Rs 7–8 per liter between petrol and diesel) and does not offer a significant increase in mileage? Diesel vehicles get negative points on T.
Environmental:
Between 2010 and 2015, data from satellite imagery show India’s PM 2.5 pollution levels grow 13 percent while China’s reduced 17 percent in the same timeframe. As of 2016, 14 of the world’s most polluted cities were in India. Diesel is seen as a major culprit in the health hazards arising out of pollution. The legal outcome, addressed later, is also based on the environment. The present variety of Diesel vehicles get highly negative points on E, but that could change with BS-VI. So let’s null this argument.
Legal:
The National Green Tribunal’s ruling on the ban of BS-IV diesel vehicles from being sold from April 2020 and the continued reduced life of diesel engines over 10 years of age clearly indicate which side the balance tilts, legally. Diesel vehicles get negative points on L.
The Analysis
The PESTEL framework depicts four negative points, one null and only one positive point for continuing with a diesel upgrade for Maruti Suzuki variants. But how does this translate to the industry as a whole is where the game will get interesting.
Redrafting Corporate Strategy
While the option to upgrade to BS-VI exists for the players in the auto industry, costs associated with the upgrade and possible reduced returns for consumers may spell doomsday for the diesel segment altogether. The fallback option of petrol and perhaps CNG stays for Maruti Suzuki, but not every player in the auto industry will have it that simple.
While Maruti Suzuki’s plans are clear, it is to be seen how M&M responds to the BS-VI call, given it offers a diesel-only portfolio. It will be interesting to see the strategy that M&M crafts for itself to stay not just relevant, but also profitable in the medium to long term. The company stated that it may do away with upgrading its low-selling portfolio of cars, but will the consumer opt for a more expensive Mahindra Scorpio or XUV 5oo in a market if Maruti Suzuki is able to convert its crossovers to petrol?
The game is afoot.
Kartik Malhotra is Senior Executive Producer & Editor, Special Projects at Network 18. He is an alumnus of IIM Lucknow and, when not behind the camera, indulges in armchair analysis of strategy and technology.
Check out our in-depth Market Coverage, Business News & get real-time Stock Market Updates on CNBC-TV18. Also, Watch our channels CNBC-TV18, CNBC Awaaz and CNBC Bajar Live on-the-go!