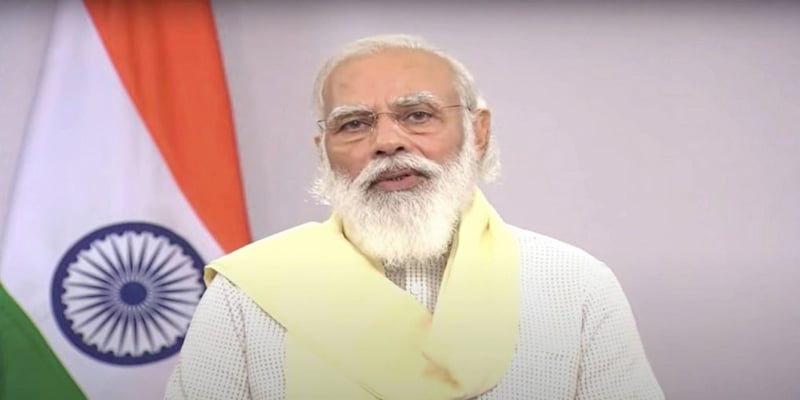 Calling the narrative about 'ending of MSP' the "biggest lie ever", Modi issued a categorical assurance that MSP will neither be scrapped or stopped. He pointed out that the law has been in effect for the past six months. The government has not stopped procurement of crops under the MSP mechanism, neither has a single mandi anywhere in India been shut.

Much has been written about Narendra Modi's communication skills, his ability to connect with the masses and his oratory. On Friday, all his strengths were on display as he issued an hour-long virtual address to farmers. It was originally meant for farmers in Madhya Pradesh as part of the Kisan Mahasammelan programme, but the prime minister's speech ended up being a point-by-point rebuttal to the dubious narrative against farm laws and the political opposition against reforms.

It was also evident that the prime minister was hurting. His speech was passionate, forceful, categorical and emphatic - giving us an inkling of two things: First, the pressure that Modi is under and second, his determination not to take a backward step in implementing the reforms.
Modi had done his homework, and it showed. He went after the Opposition parties with aggression, accused them of fabricating lies around the reforms and exploit the gullibility of farmers for their political benefit, cut through the obfuscations and ripped the lies into shreds.
He also gave a blow-by-blow account of all the steps taken by his government to ease the lives of farmers and increase their income, and presented a number of statistics to buttress his claim. Modi also made it clear that while the BJP government at the Centre and he himself will go to any lengths to listen to the farmers' questions, allay their fears and address their misgivings, the farm bills shall not be rolled back.
This is a huge statement of intent from a political leader in the rough and tumble of India's electoral politics where the accepted wisdom is to play safe instead of upsetting the applecart. Modi, however, has never been a status quoist prime minister. He has taken his mandate to be an order from the electorate to implement bold reforms and fulfill the promises that the BJP had promised in its manifesto, and the speed and determination with which he has gone about making the promises a reality has caught even the opposition by surprise. Modi's willingness to spend considerable political capital in implementing tough reforms at the cost of upsetting some interest groups, including alienating an influential and powerful section of the farming community, gives further proof that he is a risk-taker and doesn't go by the unwritten rule of Indian politics of playing safe and consolidating gains.
In Friday's address, where Modi explained how the three farm laws against will serve the interests of farmers by offering them more choices without taking anything away from the existing procurement mechanism, the prime minister adopted a two-front strategy. He first attacked the Opposition for misleading a section of farmers who are protesting since 26 November and sought to expose the Opposition's duplicity by highlighting how his government has implemented the Swaminathan Report, gave more money to farmers by way of MSP and procured way more crops through the mechanism compared to the UPA 2 regime.
For instance, he pointed out that while the previous government had purchased about 1,700 lakh metric tonnes of paddy from farmers in five years (of UPA-2 regime), the BJP government in its first five years purchased 3,000 lakh metric tonnes of paddy from farmers. "Our government has not only increased MSP, but has also bought a lot from farmers on MSP. Its biggest advantage has been that more money has reached the farmers' account than ever before," he said.
He also pointed out that unlike in the past, the money due to the farmers goes straight into their bank accounts without being subjected to leakages or 'cut culture'. Among many other examples the prime minister gave, another was on pulses, detailing how the country that was forced to import pulses to meet its demand in 2014 now has become self-sufficient, farmers are also getting more money, prices have also come down. Modi also launched a scathing attack on Congress for going back on its words on waiving off farmers' loans and pointing out hos this has become a convenient tool for the Opposition to exploit the farmers' gullibility that mostly result in unkept promises.
If one part of Modi's speech was about presenting statistics and showing how the Opposition was distorting the truth, the second part was about allaying the fears of farmers and going out of his way to assure them that the system of MSP and APMC - the biggest flash point in protests - will neither be scrapped of stopped.
Calling the narrative about 'ending of MSP' the "biggest lie ever", Modi issued a categorical assurance that MSP will neither be scrapped or stopped. He pointed out that the law has been in effect for the past six months. The government has not stopped procurement of crops under the MSP mechanism, neither has a single mandi anywhere in India been shut.
Finally, the prime minister also stated that contract farming has already been a norm in many states, and laws are framed in such a way so that the farmers' interests are protected, not the interests of businesses, however, he assured farmers that the government is ready to dispel all doubts over it, if any persist.
Today's speech showed Modi can be a combative street fighter and take the attack to the Opposition. Winning the hearts and minds of sceptical farmers and building trust will be a long process, but the Opposition has received the message.
Check out our in-depth Market Coverage, Business News & get real-time Stock Market Updates on CNBC-TV18. Also, Watch our channels CNBC-TV18, CNBC Awaaz and CNBC Bajar Live on-the-go!